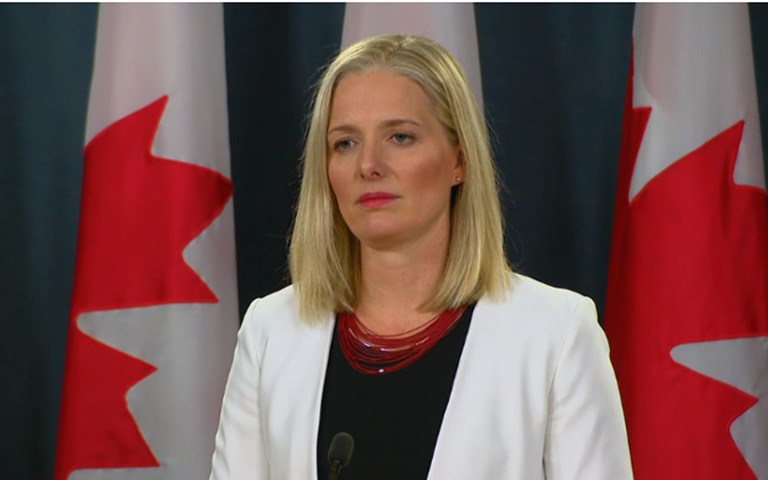 The federal government will create a new federal agency to evaluate resource and energy projects, simplify the approval process and scrap the National Energy Board in favour of a new regulator, environment minister Catherine McKenna announced.

McKenna tabled Bill C-69 on Thursday, which will create the Impact Assessment Agency of Canada to review all major pipelines and resource projects in Canada. The reviews will expand from looking exclusively at a project’s environmental impacts to also include its health, social and economic impacts, and its effects on Indigenous Peoples. Every review will include a gender-based analysis.

The reviews will also involve “proactive regional assessments” and consider whether companies are using the best available technologies and practices to mitigate environmental impacts.

The new legislation also scraps the much-maligned National Energy Board (NEB) for the new Canadian Energy Regulator (CER), which will lose its environmental assessment responsibilities but be responsible for regulating pipelines and the traffic and tariffs associated with transmitting oil and gas through them. Critics had previously argued the NEB was unsuited to handling environmental assessments.

McKenna told reporters on Thursday that the legislation aims to “restore public trust in how the federal government makes decisions about major projects like mines, pipelines and hydro dams.”

She criticized the previous Conservative government for having “gutted” the environmental assessment process and undermining public trust in the process.

The new agency will have a maximum of 300 days to review projects. “We will be streamlining the process and co-ordinating with the provinces and territories to reduce red tape for companies, and to avoid duplicating efforts in evaluating projects,” McKenna said. “Our goal is one project, one review.”

Reviews will include a new “early engagement phase” in which the government will advise project proponents which Indigenous communities they need to speak with, McKenna said.

The current Environmental Assessment Act’s “standing test,” which limits who can participate in the review process, will be done away with to allow more input from Indigenous communities, environmentalists and members of the public.

The agency’s decisions will be based on “robust science, evidence and Indigenous traditional knowledge,” McKenna said, and will work with other bodies like the CER and the Canadian Nuclear Safety Commission.

The government will also increase funding to support Indigenous participation in the process, and to help them develop the capacity to assess and monitor projects’ impacts. “Indigenous jurisdictions will have greater opportunities to exercise powers and duties under the new Impact Assessment Act,” she said.

In a statement provided to CIM Magazine, the Mining Association of Canada (MAC) said it was reviewing the legislation but “at first glance…the bill appears to strengthen the agency’s authority to run efficient processes.” MAC also highlighted the bill’s regional and strategic assessments, “more innovative and fair approaches to addressing cumulative effects,” better opportunity for consultation with Indigenous people and the public, and co-operation with the provinces and territories as potential upsides.

But, it noted, “the draft legislation introduces a range of new concepts related to timelines and costs, which depending on how they are implemented could adversely impact the industry’s competitiveness and growth prospects.”

Canadian Association of Petroleum Producers president and CEO Tim McMillan said the association needed more clarity on how the legislation will intersect with the government's climate change file and the upfront expectations for project proponents, among other concerns. "Even with the information we have today it's hard to say what our final view will be," he said.

However, he added that Canada has a "reputational problem about an inability to get projects done," which he hopes the legislation will rectify. "While Canada talks about having a clear and transparent regulatory process, [there's been] an inability to move good projects forward at a timely fashion. This legislation is an opportunity to improve substantially."

The review process involved 14 months of consultation, McKenna said. A four-person panel appointed by McKenna released its suggested process in April 2017, which was panned at the time by MAC as "essentially unworkable" because it would "sideline" project proponents.