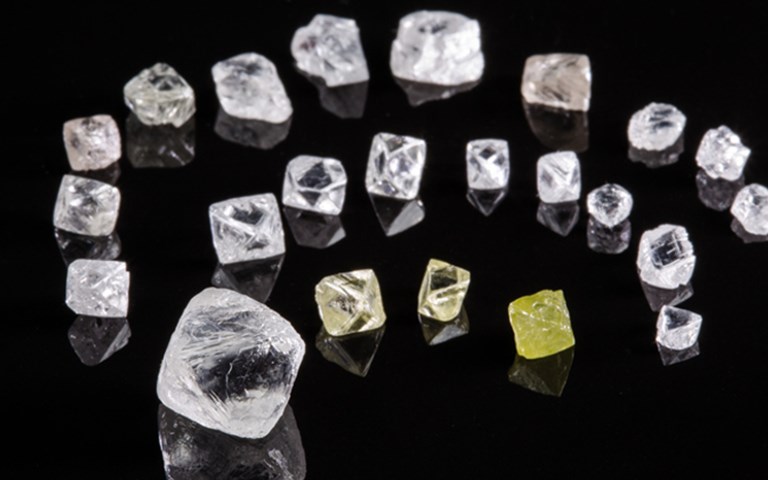 A selection of diamonds from a bulk sample of Chidliak's CH-7 kimberlite pipe. Courtesy of Peregrine Diamonds

Chidliak, a diamond deposit located 120 kilometres northeast of Iqualuit on Baffin Island, has 74 identified kimberlite pipes at the site so far, including the CH-6 and CH-7, which have been the focus of its phase one development program. Between the two pipes, Chidliak has an inferred resource of 12.45 million tonnes at 1.78 carats per tonne (ct/t).

In addition to CH-6 and CH-7, Peregrine has said an additional six pipes are expected to have economic potential.

According to Chidliak’s updated preliminary economic assessment, prepared by JDS Energy and Mining in May, the project is expected to have a 13-year mine life, and produce 16.7 million carats over that time, at an average grade of 1.8 ct/t.

De Beers Canada CEO Kim Truter told CIM Magazine that the “excellent work” Peregrine had done on Chidliak, including recent exploration work and the PEA, made it “increasingly obvious that this was the most attractive undeveloped diamond resource in Canada.”

Peregrine founder and executive chairman Eric Friedland called the announcement the “next step in the development of the Chidliak project,” adding that “it is particularly gratifying that the quality of the diamond resource we have defined is recognized by the world’s premier integrated diamond company.”

Chidliak was discovered in 2008, and has previously attracted the eye of BHP, which eventually left the diamond business, and of De Beers Canada.

In September 2012 De Beers and Peregrine completed an agreement that gave De Beers the exclusive rights until December 2013 to enter into an earn-in and joint venture agreement for 50.1 per cent of Chidliak. The agreement would have required De Beers to pay $58.5 million to earn its majority stake.

De Beers paid $5 million for the exclusive right, and a further $2 million for a work program on Chidliak, but ultimately walked away from the agreement in 2013. But Truter said in the last five years De Beers had been “keeping an eye on [the project].”

“The global economic situation wasn’t as favourable [in 2013] as it is today,” Truter said. “The time just wasn’t right, and the project hadn’t been developed to the point it is today.”

In 2019 De Beers will be down to one producing Canadian diamond mine – Gahcho Kué in the Northwest Territories, which went into commercial production in 2016 – as its Victor diamond mine in Ontario closes.

Truter said the decision to acquire Peregrine gave some consideration to the company’s Canadian project pipeline. “We want to make sure we’ve got a healthy portfolio, not just in Canada but across the group,” he said, “and that we take advantage of the fact that demand for jewelry has reached a record high.” A report commissioned by De Beers pegged global demand at US$82 billion in 2017, rising 0.3 per cent since the year before.

The acquisition is subject to the approval of Peregrine shareholders. The company’s board of directors has unanimously recommended its approval.