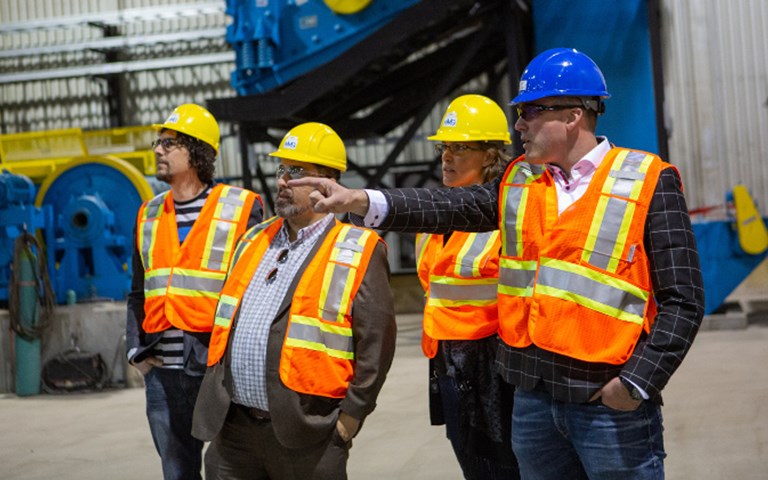 A Quebec junior miner wants to build the world’s first all-electric open pit mine at its graphite deposit north of Montreal.

Nouveau Monde Graphite (NMG) is currently working on a feasibility study for its Matawinie project in Saint-Michel-des-Saints, factoring in a completely electric design. The company expects the study to be completed in September.

“With open pit mining, the economics are less obvious than underground mining, where you have ventilation,” said NMG CEO Éric Desaulniers. “But we’re pretty confident that after the basic engineering work is done, it will be revealed to be cheaper to operate all-electric.”

Desaulniers said the company hopes to demonstrate it can use “eco-energetic solutions while respecting deadlines and budgets.” NMG plans to use electric vehicles in the mine pit, with an on-site processing plant that would also be electric.

The prefeasibility study, published in December, forecast production at Matawinie of 52,000 tonnes of graphite per year over a 27-year mine life. NMG hopes to achieve commercial production by 2022.

The feasibility study is being undertaken by Montreal engineering firm Met-Chem/DRA, with SNC-Lavalin, ABB, SGS Canada and Medatech Engineering also involved in its development.

“As of the prefeasibility study, the productivity is the same, and the total cost of ownership is about the same” for both an electric and non-electric mine, said David Lyon, the business development manager at Medatech, which does electrification work for mining companies. “There’s still a lot of optimization to be done [in the feasibility study], and what we think is that at the end of the day it will actually be cheaper to run the mine electric.”

Related: The move to battery-powered underground mining fleets is gathering speed and opening up a new realm of possibility for miners

NMG plans to be both a buyer and a supplier in the electric-battery market. Graphite is a component in the lithium-ion batteries that make electrification possible. “Our graphite is targeted towards lithium-ion batteries, so it’s natural for us to work with our customers to develop this project,” Desaulniers said.

There are some factors that make electrification more practical for NMG than it would be for most surface mines. Matawinie, unlike some projects, is located directly on the main power grid, in a province with some of the cheapest electricity rates on the continent. It is also less than five kilometres from town, so noise levels are a factor.

The challenge, Lyon said, is determining where the chargers should be located within the mine and how to introduce charging in the duty cycle without affecting productivity.

NMG is also working with Hydro-Québec to use its graphite to research ways to bring battery patents owned by Hydro-Québec to a commercial manufacturing scale, for use in better lithium-ion batteries. Any new discoveries will be jointly owned between the two partners. NMG said in mid-May that if the research is successful, the company will build another plant to process up to 100,000 tonnes of graphite concentrate per year into anode material for batteries, and purchase ore from other graphite suppliers to supplement their own production.

Other companies are already looking at following NMG’s lead. Lyon said that two other large open pit miners have already contacted Medatech about getting equipment on a trial basis since NMG made its announcement.

“I hope that everyone goes all-electric,” Desaulniers said. “It’s good for business, it’s good for the environment and I think that’s the way to go.”

With files from Jordan Faries