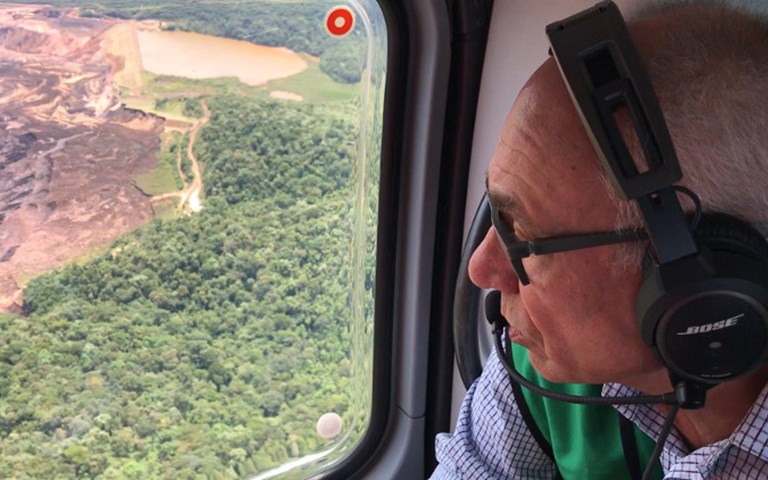 Vale CEO Fabio Schvartsman flew over the site of the Córrego de Feijão tailings dam collapse on the weekend. Courtesy of Vale

The fallout from the collapse of Vale’s Córrego de Feijão tailings dam collapse continued Tuesday as Brazilian authorities issued five arrest warrants and the country’s securities and exchange commission launched an investigation into the company’s filings related to the disaster.

According to Reuters, the arrest warrants were for company employees and contractors. The commission is said to be probing whether the company released information related to the dam burst as quickly as it should have.

Vale said in a statement Tuesday morning that it was “fully cooperating with the authorities” in relation to the arrests and “will continue to support the investigations in order to determine the facts.”

It said it had shared the preliminary results of its own investigation into the failure with federal and state authorities.

Following the Friday tragedy, which has killed 65 people so far and left more than 200 missing, the company has been hit with multi-million dollar fines and court-mandated holds on its assets. On Monday the Minas Girais state labour court froze US$212 million (800 million reis) of assets, and on Friday judges in Belo Horizonte and Brumadinho froze US$2.92 billion (11 billion reis). The company has also been fined 250 million reis by Brazili’s federal environment institute, Ibama, and 99.14 million reis from the state of Minas Girais.

It also lost almost 25 per cent of its market cap, or more than US$18 billion, on the Sao Paulo stock exchange on Monday.

“I am completely torn apart by what has happened,” Vale CEO Fabio Schvartsman said Sunday at a press conference in Rio de Janeiro. Some 300 of the mining company’s employees were working on site at the time of the rupture. At the time of the collapse, many workers were eating lunch at the site’s cafeteria, which was engulfed by the run-off sludge, primarily made up of silica, Schvartsman confirmed.

The 11.7 million cubic metres of mining waste tore through the region, overtaking the nearby village of Brumadinho and destroying homes, the sludge rising as high as 26 feet deep in some places. An evacuation order has been implemented for 3,000 people, with concerns over additional ruptures in the region, which is home to more than 400 mining dams.

Related: “It’s almost certain that in the long term, these tailings facilities will fail." after Mount Polley, miners and engineers grapple with the risk of maintaining the status quo

A 130-person team sent by Israel are currently among those on the ground in Brumadinho carrying out the rescue effort, the country’s first aid delegation to Brazil. Locals have joined in on Red Cross-led rescue efforts. Efforts have been made even more challenging as a result of the heavy rains that first led to the high water levels in the dam.

The Brazilian company maintains that it took all necessary steps to certify the stability of the dam, which was in the process of being decommissioned. The last status report on the dam was conducted by German inspection firm Tüv Süd on Sept. 26, with results indicating “perfect stability.” Despite indications that a risk of rupture was low, Schvartsman admitted, the potential for devastation was high. “Each and every dam has the potential to cause damage and when it breaches, it is devastating. That’s why it is necessary to be careful.” Though the company did install disaster sirens at the mine, Schvartsman said the collapse happened too quickly for them to be effective. “The breach was too violent.”

Local officials, however, are asserting that more should have been done to avoid this disaster. Brazil's prosecutor general, Raquel Dodge, said the company and its executives should be held “severely responsible for compensation.” Vale released a statement Tuesday stating that a committee would be created “to follow-up on the measures taken to support the victims and the recovery of the areas affected by the breach of the dam, assuring that all necessary resources will be applied.” A second committee would also be created to investigate the cause of the dam failure and the responsible parties. In the meantime, the company has suspended dividends to its executives and shareholders.

The collapse is Vale’s second in Brazil in three years. The dam at Vale and BHP co-owned Samarco, also located in Brazil’s Minas Girais province, ruptured in 2015, destroying a small community and killing 19, and is regarded as the worst environmental disaster in the country’s history.

The Córrego de Feijão collapse comes less than a month after far-right President Jair Bolsonaro was sworn into office, campaigning on promises to reduce regulations on the country’s mining industry.

“Government regulations are important to establish the basic requirements for safety of workers,” said tailings risk expert Dirk Van Zyl, a professor at the University of British Columbia’s Norman B. Keevil Institute of Mining Engineering. “In the case of this tailings failure, it is really related to the safety of workers and the public.”

Van Zyl points to British Columbia as example of strong regulations aimed at protecting employees and residents, revised following the Mount Polley tailings failure. “Moving to zero tailings failures requires the concerted efforts of regulatory efforts as well as strong commitments from the industry. Strong leadership of the mining industry to improve practices, especially the governance of tailings management and custody, is essential,” Van Zyl said.