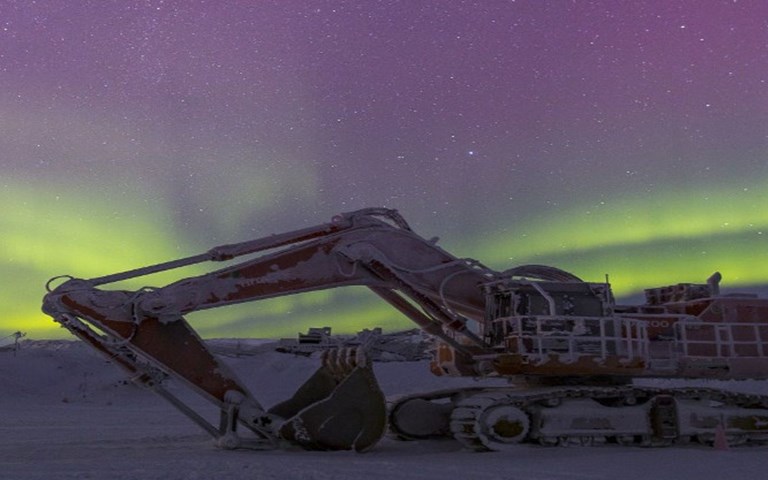 Mining equipment at Glencore's Raglan nickel mine in northern Quebec. The mine will get a second three-megawatt wind turbine to further displace diesel consumption, thanks to federal government funding. Courtesy of Glencore

The federal government is investing $4.2 million in two renewable energy projects in Quebec and Nunavut to reduce reliance on fossil fuels at mines in Canada’s north.

Both projects will be managed by Tugliq Energy Corporation, a renewable energy company focused on remote regions.

The projects will be funded through Natural Resources Canada’s Energy Innovation Program, said Paul Lefebvre, the parliamentary secretary to Canada’s Minister of Natural Resources, at the Association for Mineral Exploration British Columbia’s (AME) Roundup conference in Vancouver on Monday.

“Today’s investments will help reduce reliance on diesel fuel and transform the energy landscape in Canada’s Arctic region,” said Lefebvre. “Nowhere are these investments more important than in the mining sector.”

The Raglan II project will receive $3.9 million to install a second three-megawatt wind turbine and increase battery storage facilities at Glencore’s Raglan nickel mine in northern Quebec. The existing renewable energy infrastructure at the site was installed during the Raglan I project. Raglan I reduced the diesel consumption at the mine by approximately 10 million litres, or the equivalent of 30,000 tonnes of greenhouse gases since it started operation in 2014.

Tugliq’s second project, at TMAC Resources’ Hope Bay gold mine in the Kitikmeot region of Nunavut, will receive $283,000 to complete a front-end engineering and design study to introduce compressed air energy storage for energy generated by wind turbines. Hope Bay, which is currently in the permitting stage for its Madrid and Boston deposits and aiming for production in 2020, is 100 per cent diesel-powered.

Compressed air storage uses a disused mine shaft to store air, which is released as needed via a compressor and used to drive a turbine to generate electricity. It can be used with any energy generation technology but is particularly well suited for wind and solar energy generation, which fluctuate with weather conditions. According to Abbatiello, the compressed air technology is brand new to mining.

“It has been used in Germany,” he said. “They are using compressed air energy generation to support the grid and using a salt mine as a reservoir. So, it has been used with mines, but in a different context, not used to power the mine but to sustain the grid.”

The demonstration project at Hope Bay will involve construction of wind turbines to generate energy and the compressed air will be stored in tanks above the surface, as underground development has not begun.

“Thanks to NRCan’s support, we are now reducing diesel consumption in the Arctic by more than four million litres on an annual basis,” said Abbatiello. “We are planning for further reductions of about 10 million litres annually in the coming years.”