New traceability system aims to allow the industry to authenticate its products and better comply with obligations related to aluminum exports
By Matthew Parizot
August 19, 2020 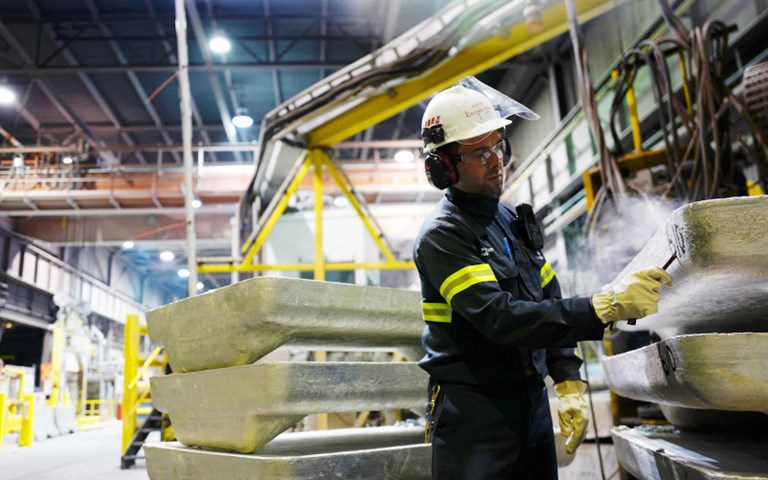 A pilot project for the traceability system was conducted at Rio Tinto's Saguenay aluminum smelter. Courtesy of Rio Tinto.

The funding will be used in partnership with the Aluminium Association of Canada (AAC) to continue development of a supply chain tracing system that, according to the AAC, will provide the Canadian origin of metal crossing the United States border, real-time documentation of metal market movements within the United States and, critically, the ability to better comply with obligations related to the lifting of U.S. tariffs.

It is unclear whether this new system will be able to resolve issues surrounding the current tariffs imposed by the United States on Canadian aluminum, as that disagreement has more to do with volume of exports as opposed to supply chain tracing. However, as part of the Canada-United States-Mexico Agreement, which became official on July 1, Canada is obliged to guarantee the North American sourcing of the aluminum that is used by its smelting industry.

“In this period of economic and political uncertainty for the industry, the authentication of aluminium is a highly strategic approach to leverage the strengths of Canadian aluminium and consolidate its markets,” said AAC president and CEO Jean Simard.

According to the AAC, the government’s support for this traceability system has been “the culmination of more than two years of work by the industry,” when a 2018 U.S.-Canada tariff dispute raised concerns over the origin of metal entering the U.S. The government already established a surveillance system in September 2019 through the Import Control List, a range of goods over which it imposes import controls. However, that system only provides visibility to listed imports and offers no insight into Canadian exports.

As such, the ACC partnered with the Optel Group of Quebec, a global provider of supply chain traceability systems, to work on two pilot projects testing the feasibility of using existing systems in the aluminum industry. With assistance from Aluminerie Alouette and Rio Tinto’s smelter in Saguenay, Quebec, the AAC says the concept will be ready for a nationwide rollout following the end of the second pilot, which is currently in its final phases. Optel uses and combines different techniques to build its traceability systems, including blockchain technology, cloud computing, artificial intelligence and Internet of Things technology.

In addition to the $5 million for the AAC, Joly announced additional funding for two Saguenay businesses – design and construction services supplier Canmec and aluminum shipper Staca – in the form of repayable contributions of $500,000 and $133,470 respectively in order to acquire new equipment and modernize their facilities.

“In this time of uncertainty, we are here for the aluminum sector and to support all of the jobs it represents,” Joly said. “That is what today’s announcement illustrates: by supporting the [AAC], Canmec and Staca, we are continuing to boost the industry in its efforts around innovation and traceability. Together, we can make a difference for the economy and people of Saguenay-Lac-Saint-Jean, Quebec, and all of Canada.”