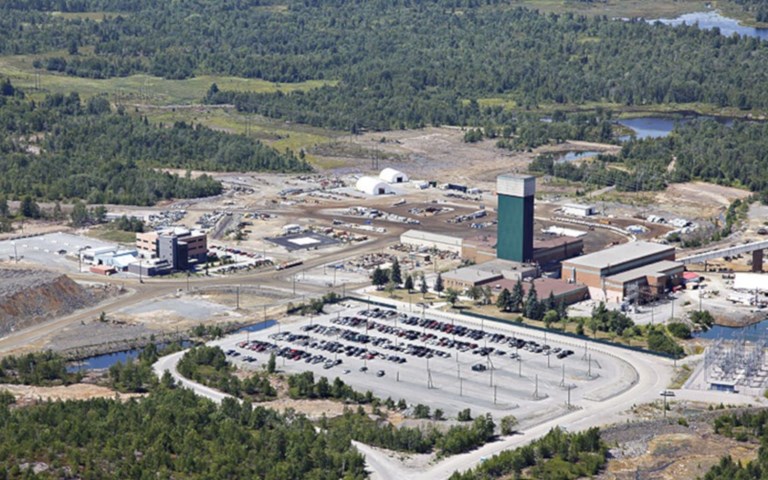 The original NHEET was discovered by accident at Vale's Crieghton nickel mine near Sudbury, Ontario. Courtesy of Vale.

Natural Resources Canada awarded $1.5 million on Feb. 11 to the Natural Heat Exchange Engineering Technology (NHEET) research project, a project between the Mining Innovation, Rehabilitation and Applied Research Corporation (MIRARCO) and other organizations such as CanmetMINING and Teck, to examine the use of fractured rocks to improve cooling and air delivery in underground mining.

The benefits of such a system were discovered over 50 years ago at Vale’s Creighton nickel mine near Sudbury, Ontario. In the 1960s, the miners realized that cool air was entering the underground mine through a large expanse of waste rock during the summer, while warm air was entering during the winter. They then began directing the air throughout the mine, allowing the miners to use both heated and cooled air, depending on the season, and carry out mining at Creighton to a depth of 2.5 kilometres without using artificial refrigeration.

“The broken rock acts as storage the heating or the cooling,” Lorrie Fava, director of decision support software at MIRARCO Mining Innovation, told CIM Magazine. “It saves the cost of the artificial refrigeration and heating that it's displacing [and] it has several environmental benefits by not using refrigerants.”

The broken rocks, cooled over the course of the winter, provide a feed of chilled air during the warmer months. The rocks slowly come up in temperature over the summer and lose that heat during the winter to the mine below. At Creighton the air is drawn down by the mine’s existing ventilation fans, which is a key benefit of the system.

“It's the [intake and ventilation] fans that the mine would have anyway. You need those fans, so it's a matter of keeping the resistance of that broken rock mass low so that you don't [need to add] any infrastructure,” Fava said. “In the scenario, where they already have a pit and will now be mining underground beneath that pit, it makes the case that there will be no significant extra infrastructure needed to tie your natural heat exchange system with the ventilation system of the mine.”

MIRARCO hopes to engineer the NHEET into a method which can be applied in mine sites in Canada and abroad. “[The goal is] to actually have one of these systems at a mine other than Creighton: a fully engineered system, rather than the opportunistic one,” Dr. Fava said. “The ultimate goal would be that at the end of this current project we identify the methodology, the benefits and the scenarios that are applicable, and then have a follow-up where a mining company has it implemented at one of their sites.” 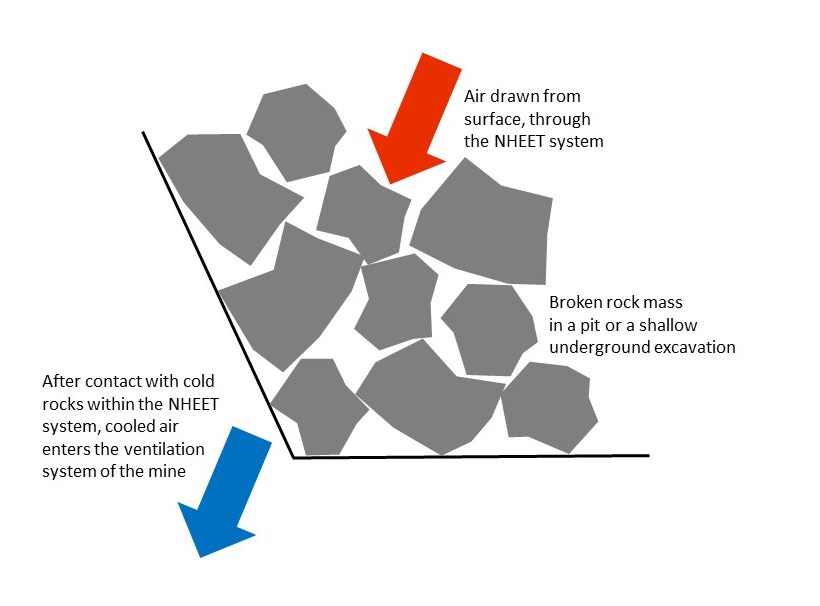 A diagram of how the natural heat exchange technology works. Courtesy of MIRARCO.

According to MIRARCO, the Ontario Centres of Excellence has already granted $45,000 for the project. NRCan’s $1.5 million award will fund the NHEET project’s research on heat exchange modelling, geomechanics and energy. The project timeline is short. MIRARCO plans to finalize a comprehensive report and draft publication by March 2021. Until then, they will be conducting case studies, operation of scale models and energy assessments.

Fava believes that recent funding is why development of the concept is only starting now. “There's always been the thought that this may apply to other mines,” She said. “With the opportunity for funding that's there for clean growth, we are able to study it and come up with the methodology to apply it elsewhere.”