Prime Minister Justin Trudeau announces tax incentives for electric vehicles in move to a net-zero economy by 2050 at PDAC 2020
By Carolyn Gruske
March 03, 2020 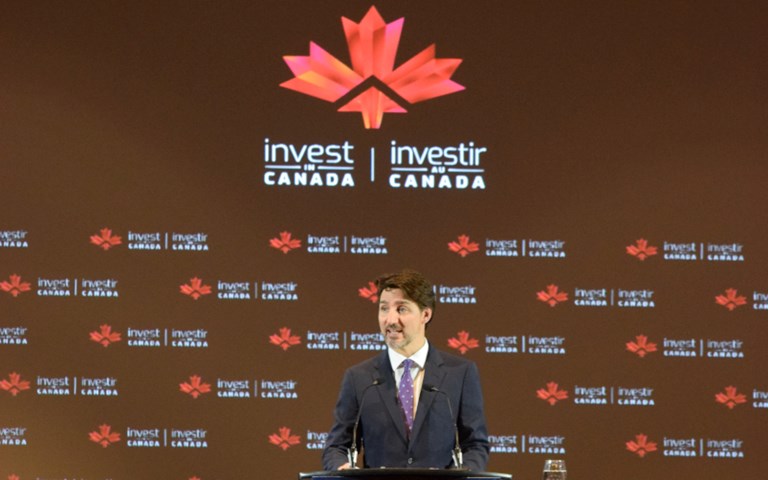 On Monday, Prime Minister Justin Trudeau took to the podium at PDAC 2020 to discuss the relationship of the federal government and mining industry and announced several government plans. The Prime Minister assured his commitment to keeping the sector strong and competitive as the country transitions to a low-carbon economy.

“[Our] government wants to keep our mining sector strong and growing,” Trudeau said. “We want to attract new investments. We want to keep good jobs here, create new opportunities for workers and business owners alike, and maintain Canada’s stellar reputation in this field.”

Prime Minister Trudeau announced that the federal government would be extending an incentive to promote the adoption of on-road electric vehicles to off-road ones as well, including vehicles used in mining applications. Originally introduced in the 2019 federal budget, the incentive will provide a 100 per cent write-off of the purchase cost of eligible zero-emission vehicles and automotive equipment in the year they are put in use.

The Prime Minister also pledged that Canada will meet its 2030 Paris targets and will begin work on a plan to achieve net zero by 2050 starting this year. Trudeau stated that the government will be looking for assistance in creating the plan, including help and input from the mining industry.

Trudeau acknowledged that climate change, net zero plans and carbon reduction can be contentious and polarizing issues in the mining industry and in general.

“Around the world and right here in Canada, the debate between environment and economy is becoming increasingly contentious and polarized. “I think we can all agree it is unhelpful for polarized views to define the battleground of a debate. To adapt to major disruptions like climate change and seize new opportunities in emerging new markets like clean tech, what we need to do is build common ground instead.”

The Prime Minister said Canadians know that we need to protect the environment at the same time as creating good jobs. “It won’t be easy, but we all know – you all know – that’s where we need to go.”

Related: With the Liberals winning a minority in the 2019 Canadian federal election, mining and energy representatives wish to avoid another major legislative overhaul

Prime Minister Trudeau spoke about how clean technology products like electric-vehicle batteries don’t run without products of the mining industry. He also put forth solar panels as an example, saying they require 19 metals and minerals and that Canada is home to 14 of them.

“Leading the clean energy transition means rethinking about how we harness Canada’s resources, not whether or not we harness them at all … Canada is uniquely positioned to be the cleanest supplier of metals and minerals and you all have an integral role to play to making this a reality.”

Afterwards, people in the crowd said they were generally pleased by what the Prime Minister had to say.

Simon Thibault, director of national capital region of Propulsion Québec told CIM Magazine that the announcement of “extending the zero emission policy to heavy industry vehicles like mining vehicles is extremely interesting for us, especially in the view of having fully electric mines – open pit mines and underground mines. This is really interesting.”

In a statement issued after the Prime Minister’s presentation, Pierre Gratton, Mining Association of Canada president and CEO said, “This announcement is welcome news for Canada’s mining sector… [Electric] equipment has a significant cost premium, so today’s announcement will help de-risk such purchases and accelerate the adoption of electric vehicles at more mines.  This news, coupled with recent announcements on critical minerals and the Canadian Minerals and Metals Plan, shows the government is committed to enhancing our sector’s competitiveness.”

However, Rob Stevens, vice-president of regulatory and technical policy for the Association for Mineral Exploration, hoped for more from the Prime Minister. “There was some mild recognition of some of the challenges we are having in moving projects forward and I think that’s something the federal government will have to work heavily on, and making sure Canadians support resource development because of how important it is to our country. I heard some of that, but I think to hear that message even stronger would be really nice.”

In his speech, Trudeau acknowledged the role mining has played in shaping the economy of the country as a whole, and of every province and territory, and how mining jobs support families and communities.

Trudeau acknowledged that the mining industry can’t be expected to stand on its own, and stated that the sector needs a partner to help it grow and adapt to the changing market conditions – especially as the world moves towards a low-carbon economy. “Our government is that partner,” he said.