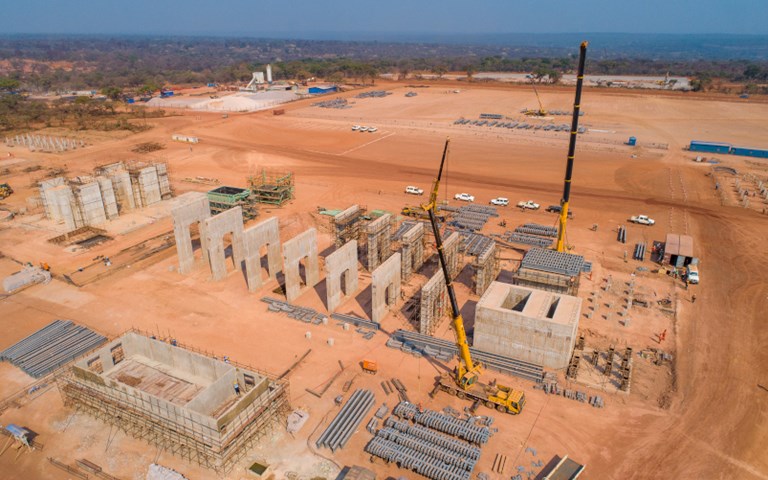 Ivanhoe says it's ahead of schedule for underground development at its Kakula mine in the Democratic Republic of Congo. Courtesy of Ivanhoe Mines.

Welcome back to your weekly mining news recap, where we catch you up on some of the news you may have missed. This week’s headlines include Barrick Gold selling its joint interest in the Mali-based Morila gold mine, Brazil introducing new legislation on mining dams and Imperial Oil suspending production at its Kearl oil sands mine in northern Alberta.

Endeavour Mining expects to resume mining activities at its newly acquired Boungou mine in Burkina Faso in the coming weeks. The company has implemented a number of new procedures for the mine’s restart program, including upgraded site infrastructure and a security plan in which mine employees will be flown into the mine and stay in on-site employee housing. In early July, the company acquired SEMAFO, which owned and operated the mine at the time of a deadly terrorist attack last November in which 37 civilians were killed and over 60 were wounded after a convoy transporting mine workers was attacked on a road heading to the mine.

The National Court of Papua New Guinea has denied Barrick Gold’s request for the court to review the government’s refusal to extend the company’s lease over the Porgera gold mine, as reported by Reuters. The news comes after Papua New Guinea’s Prime Minister, James Marape, stated that the government had granted a new lease of the mine to a state-owned firm, Kumul Minerals Holding. Barrick plans to appeal the decision to the Supreme Court and has launched a separate complaint with the World Bank’s International Centre for the Settlement of Investment Disputes.

Barrick Gold and AngloGold Ashanti have agreed to sell their joint 80 percent interest in the Morila gold mine in Mali to Mali Lithium for a cash payment between US$22 million and US$27 million. Barrick stated that selling its stakes in Morila will allow it to focus on discovering, developing and operating its tier one assets. The sale will need to be acknowledged by the state of Mali, which holds the remaining 20 per cent interest in the mine and which underwent a coup d’état in mid-August. The company estimates to close the sale by the end of October.

Rio Tinto and Turquoise Hill have released the results of a technical report on the Oyu Tolgoi copper-gold project in Mongolia, outlining a new mine plan that projects higher production but lower mineral reserves. The report assessed that the new mine design plan, which the companies undertook in July to address the stability risks at the project, will reduce the Hugo North mineral reserve estimate to 6.7 million tonnes of copper and 4.5 million ounces of gold, compared to its previous estimate of 7.9 million tonnes of copper and 5.4 million ounces of gold. The report also stated that the new plan will allow the mine’s gold and copper production to increase 140 and 315 per cent, respectively, from 2022 to 2028.

Ivanhoe Mines has announced it expects to begin copper production at its Kakula project in the Democratic Republic of Congo in less than a year as its underground development is ahead of schedule, as reported by Mining.com. A joint venture with Zijin Mining Group, if built, the mine would be the world’s second-largest copper mine and is forecast to produce 3.8 million tonnes of copper ore a year with an average grade of more than six per cent over the first five years of operation. The company will issue an independent definitive feasibility study for development of the mine later this month.

Brazil’s Senate has passed a new bill introducing tighter safety and inspection rules for mining dams, as reported by Mining Technology. According to the new bill, upstream dams for tailings ponds, similar to the one that collapsed at Brumadinho, are prohibited and must be decommissioned or changed under a security and demobilization plan by February 2022. The bill also prohibits the construction of any tailings dams within a 10-kilometre distance, or a 30-minute drive, of nearby communities and includes fines of up to R$1 billion if mining companies do not comply with regulations.

Equinox Gold has suspended mining activities at its Los Filos mine in Mexico due to a blockade by members of the local Carrizalillo community, as reported by Mining.com. The community alleges that the company has not complied with its 2019 social collaboration agreement regarding clauses on discrimination and health and environmental protection. A reduced workforce will remain onsite to maintain appropriate safety, security and environmental systems while the company is in discussions with community leaders.

Imperial Oil has suspended production at its Kearl oil sands mine in northern Alberta as a result of a diluent supply pipeline shutdown, as reported by Global News. Part of the Polaris pipeline system was shut down after its operator, Inter Pipeline, detected a leak east of Fort McMurray. Imperial Oil is keeping mine facilities on standby in order to restart operations as soon as the pipeline resumes service and its diluent supply is restored, and is also looking at other diluent supply options.

The Commission for Environmental Cooperation has released a report that states there is strong evidence that oil sands tailings ponds in Alberta are seeping into nearby groundwater, as reported by CBC. Environment and Climate Change Canada Minister Jonathan Wilkinson expressed concern over the report’s findings and stated that oil sands tailings will need to be addressed, while the Alberta government’s chief scientist, Garry Scrimgeour, stated he is still reviewing the 208-page report and that the government and oil sands industry have made strides to rehabilitate and reduce tailings ponds in the province.

A range of data-focused tools designed for planning, conducting and monitoring blasts can help miners optimize blasting and reduce costs. Blasting technology can track the financial impact of a blasting strategy on an operation’s downstream stages, simulate blasts to generate predictive models and monitor ore movement after a blast. By using these tools, miners can capture more data to better understand blasting and make necessary adjustments to make smarter plans.

The fourth annual Mineral Cup is underway! Dr. Eddie Dempsey, lecturer in structural geology and geohazards at the University of Hull in Yorkshire, England, started the twitter tournament in 2017, and it has turned into a way to bring geologists, students and others together. To decide which mineral should join the ranks of previous winners olivine, garnet and ice, head to @MineralCup on Twitter to start voting.