Canadian Mining Hall of Fame reveals 2022 nomineesA prolific company builder, a powerful regulator, an influential metallurgist, a founder of an important mine and a legendary prospector will be inducted into the Hall of Fame in 2022.

A prolific company builder, a powerful regulator, an influential metallurgist, a founder of an important mine and a legendary prospector will be inducted into the Hall of Fame in 2022.
By Matthew Parizot
November 04, 2021 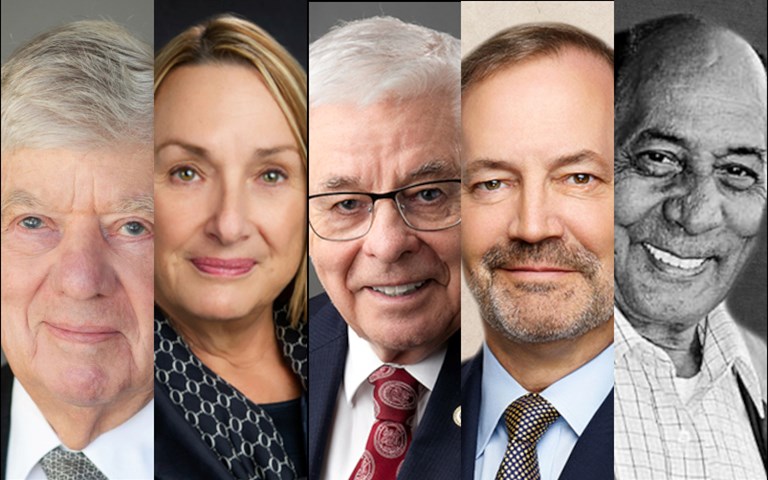 On Nov. 4, the Canadian Mining Hall of Fame (CMHF) announced the names of the five new individuals who will be inducted into its ranks, bringing the total number of mining leaders honoured to 200 since the CMHF’s founding in 1989.

“We are proud to recognize the leadership and commitment of our 2022 inductees to the Canadian Mining Hall of Fame,” CMHF chair and CEO of the Mining Association of Canada Pierre Gratton said. “Mining plays an essential role in driving our economy forward and delivering the minerals and metals needed for a low carbon future. These five inductees represent the very best of mining excellence and greatly contributed to making Canada the leader in responsible mining.”

Born in St. Catharines, Ontario, in 1937, F. Dale Corman would go on to become an extremely successful mine and company builder, serving as the president of seven public companies, director of 25 listed companies and was involved in the development on seven mines and mineral deposits in Canada and internationally. After earning a Bachelor’s in Geology from Rensselaer Polytechnic Institute in New York, Corman would have a hand in several Canadian mines, such as the Sturgeon Lake base metal mine in Ontario, and would eventually lead several junior mining companies, including Western Copper Corp. His most prominent discovery and development was the Penasquito mine in Mexico, currently operated by Newmont, which became the country’s largest gold mine and second largest silver mine.

Maureen Jensen, born in 1956 in Winnipeg, Manitoba, is best known for becoming the first woman to head the Ontario Securities Commission (OSC), taking on the role in 2011 and holding it to this day. Before joining the OSC, Jensen served as senior vice-president, surveillance and compliance at IIROC at president at Market Regulation Services. She was also an influential voice following one of the mining industry’s most infamous scams in the Bre-X Scandal, and helped introduce the National Instrument 43-101, a disclosure standard for mineral reserves and resources still used across the industry. Jensen has had leadership roles in PDAC and CIM, and has been an advocate for equity, diversity and inclusion in the mining industry.

Phillip John Mackey, born in 1941, is known as one of the world’s most influential metallurgists in the field of non-ferrous extractive metallurgy. Mackey is responsible for the development of two significant copper smelting technologies in the Noranda Reactor Process and the Noranda Converting Process. Mackey was a part of Noranda and its related entities and has passed his knowledge on to new generations of metallurgists as a professor at Laurentian University in Sudbury and a special lecturer at McGill University in Montreal. He is also a past-president of CIM’s Metallurgy and Materials Society, otherwise known as MetSoc.

Born in 1955, Robert Quartermain began his mining career as a geologist for Teck, playing an important part in the discovery of the Hemlo gold camp in the 1980s. Since then, Quartermain went on to found Pretium Resources, which has been operating its flagship Brucejack gold mine in northwestern British Columbia since 2017. Quartermain is a generous philanthropist, donating one million dollars to the University of New Brunswick’s Earth Sciences Department, which provided funding for research and six geoscience scholarships. He has also received several accolades during his career, including CIM’s A.O. Dufresne Exploration Achievement Award for exceptional contributions to mining exploration in Canada.

Peter Risby was born in Kansas in 1931 to a Black railway porter and a German nursing student, but he and his family had to flee to Canada to avoid persecution from the Ku Klux Klan. Risby’s family would set their roots down in a Cree community in Alberta, where he learned bush navigation and survival skills. He began his prospecting career in 1957, working initially for syndicates but would later work with his own Indigenous partners. His first claims in the Yukon would be sold to Johns Manville Co., then the world’s largest asbestos producer. He would go on to discover other deposits in the North, most notably what would become the Indian River gold mine, a major contributor to the territory’s economy. Risby spent his career advocating for Indigenous inclusion in the mining industry and was one of the first to hire women for exploration programs. Risby passed away in 2011.

The five new members of the CMHF will be formally inducted at a gala dinner and ceremony to be held in August 2022 at the Palais Royale Ballroom in Toronto.