Glencore’s Raglan mine to add energy-producing turbinesNatural Resources Canada will invest $7.1 million towards increasing renewable energy at the northern Quebec nickel mine

Natural Resources Canada will invest $7.1 million towards increasing renewable energy at the northern Quebec nickel mine
By Carolyn Gruske
March 11, 2021 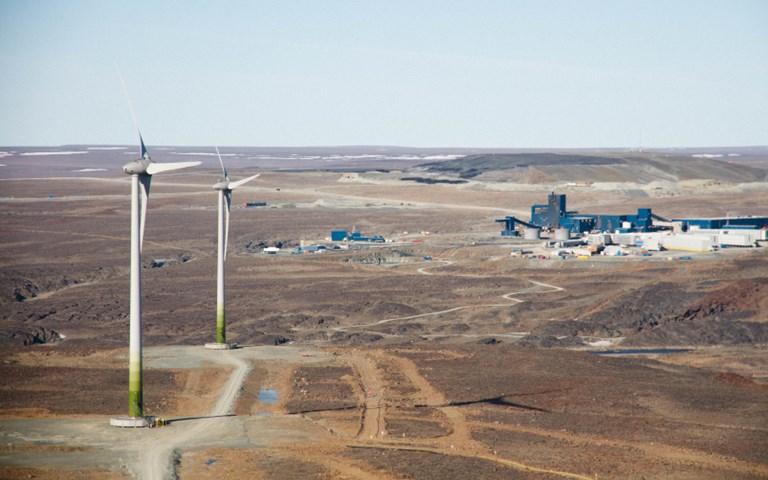 The federal government had previously spent a combined $12 million on two wind turbines at Raglan installed in 2014 and 2018, respectfully. Courtesy of La Raffinerie.

Raglan mine, located in the Nunavik region of Quebec, is getting two new wind turbines to generate clean electricity, the federal government announced on Mar. 10 during the Prospectors & Developers Association of Canada Convention.

With the Raglan Phase III scale up, the mining company hopes to add an additional six megawatts of power per year (with each turbine producing three megawatts), while reducing CO2 emissions by 7,200 tonnes and saving over six million litres of diesel annually.

To assist with the construction, the federal government, through Natural Resources Canada’s (NRCAN) Clean Energy for Rural and Remote Communities program, will invest $7.1 million in funding to the project, which will have a total budget of approximately $40 million. (The government previously spent nearly $12 million on two earlier wind-turbine projects installed in 2014 and 2018.) The Quebec provincial government is expected to contribute some funding as well. The rest will be financed by TUGLIQ Energy Corp. through a combination of equity and debt.

Also in the works are building in energy storage capacity as well as adding an upgraded management system including what TUGLIQ describes as “a state-of-the-art AI component.” The energy company is acting as the engineering, procurement and construction lead and will be subcontracting out work to other companies, giving first preference to Inuit-owned enterprises.

Building in the north poses a lengthy list of challenges, but the experience with the two earlier wind turbines means those involved in the project already have an idea in place of how it will work. According to TUGLIQ, a two-fold approach is being considered in order to take advantage of the two summer seasons for construction. Pre-fabrication and pre-commissioning will be done as much as possible, and the components will be transported into the area and installed with as little impact on the mine’s production schedule and operations as possible.

The timeline for the entire project is still being finalized, but currently, preconstruction work (such as completing engineering studies) is underway. Construction could begin one year from now, and take two years to complete, with year one being devoted to laying the foundations and the second year to erect the turbines. In total, the construction portion of the project is expected to create approximately 65 jobs, while six positions will be required to run and maintain the wind turbines.

Related: $2.2 million in financial assistance will be given to four small and medium-sized enterprises for economic recovery and to create jobs

While eliminating greenhouse gases by cutting back on the use of diesel is a good thing for the environment, there is a catch: the mine cannot eliminate too much diesel as burning the fuel produces vital heat.

“Electricity is not the only energy that the mine consumes. It also needs a lot of heat for the processes, and that heat can be difficult to generate by electricity. We need to find the best mix between producing enough energy for the mine to be able to displace diesel but not displacing so much that we would displace heat that cannot be generated by electricity,” explained TUGLIQ president and CEO Laurent Abbatiello, adding there is one additional concern – the wind itself.

“Wind is unpredictable and we need to deal with the fluctuation of wind in a safe and reliable manner for the mine.”

TUGLIQ has described the wind resource at the mine as “world class” both because it has a very good average wind speed, and because the cold Arctic air “offers a bonus in energy generation due to a higher air density.” Still, wind conditions change as the seasons change, and short-term – especially blizzard – conditions can cause notable fluctuations that must be mitigated.

Pierre Barrette, vice-president of Raglan mine, said the experience gained by learning how to generate clean energy in the north will be put to good use outside of the mine.

“This will not only have a positive effect on greenhouse gas emissions but will also help develop technologies that will help wind power integration elsewhere in the north and other communities.”

In fact, a community wind-turbine project is in the planning and feasibility-study stage. The Qaqqalik Landholding Corp has partnered with TUGLIQ Energy, through Ikayu Energy, for the development of a renewable energy project including a wind component to generate power for the community of Salluit.

Glencore and TUGLIQ sharing their green-energy-generation knowledge is appreciated, according to Michael Cameron, vice-president of the Qaqqalik Landholding Corp.

“I’d like to reiterate how important and fundamental the Glencore Raglan mine has been to the Arctic, our Arctic communities, and our local economy since 1995. Now, with the renewable energy scale-up announced today, Nuuvumiut, Nunavimmiut and Akulivik look forward to implementing community equivalents that will leverage Raglan’s know-how and demonstrated performance in diversifying our economics and energy mix.”

While Raglan’s know-how has been a long-time coming, it has been a worthwhile endeavour achieving it, according to Barrette.

“Reducing our greenhouse gas emissions is a constant objective at Raglan mine. It has also been a serious challenge for us, given our remoteness and our very limited access to green energy, as we are completely isolated from the hydro power infrastructures of the province,” he explained. “I think we can say we’ve come a long way in collaboration with TUGLIQ and joining the fight against climate change… we reduced our GHG emissions by 30 per cent. We hope to continue to make progress with more wind power.”