The alliance will aid Newmont in reaching its goal of net zero carbon emissions by 2050
By Olivia Johnson
November 12, 2021 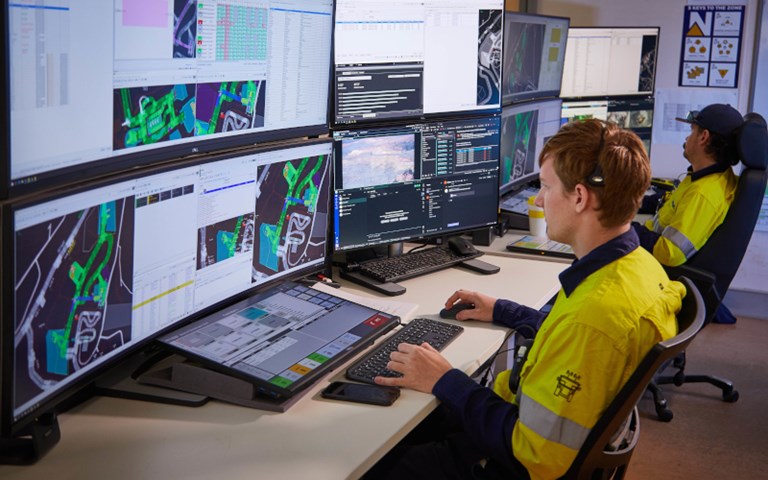 Newmont's automated haulage system control room at its Boddington mine in Australia. Courtesy of Newmont.

Newmont said this alliance will further support the company in reaching its goal to reduce greenhouse gas (GHG) emissions by 30 per cent and ultimately reach net zero carbon emissions by 2050.

According to Newmont’s ESG data table, the corporation was responsible for 3,455,480.8 tonnes of carbon dioxide equivalent from 12 mines in 2020. However, data on emissions produced by the Pueblo Viejo mine in the Dominican Republic was not available. Approximately 40 per cent of the company’s carbon emissions come from surface and underground mining fleets.

The company first announced its goal to reduce greenhouse gas emissions in Nov. 2020.

Related: New technologies are primed to change the way we mine, but implementing them into existing operations will not be easy

“Today, we furthered that commitment by announcing a new strategic alliance with Caterpillar to address climate change by fundamentally changing the mining industry through the rapid development and implementation of a comprehensive all-electric autonomous mining system to achieve zero emissions mining,” said Newmont president and CEO Tom Palmer.

Under the agreement, Newmont plans to provide a preliminary investment of US$100 million as both companies set initial automation and electrification goals for the Cripple Creek and Victor mine in Colorado and the Tanami mine in Australia. They will introduce an all-electric automated haulage fleet and deliver 26 battery electric autonomous vehicles by 2026.

Newmont will also support Caterpillar’s use of the MineStar suite. It will be deployed across Newmont’s surface and underground assets globally and facilitate centralized production and asset management.

“Caterpillar is committed to providing transformational advancements in safety, sustainability and technology,” said Jim Umpleby, chairman and CEO of Caterpillar Inc. “We share Newmont’s dedication to a reduced-carbon future, and we’re honored to work together on this industry leading effort.”