Osisko Metals president and COO Jeff Hussey explains how underinvestment in base metals could lead the mining industry to miss out on the upcoming super-cycle
By Matthew Parizot
May 07, 2021 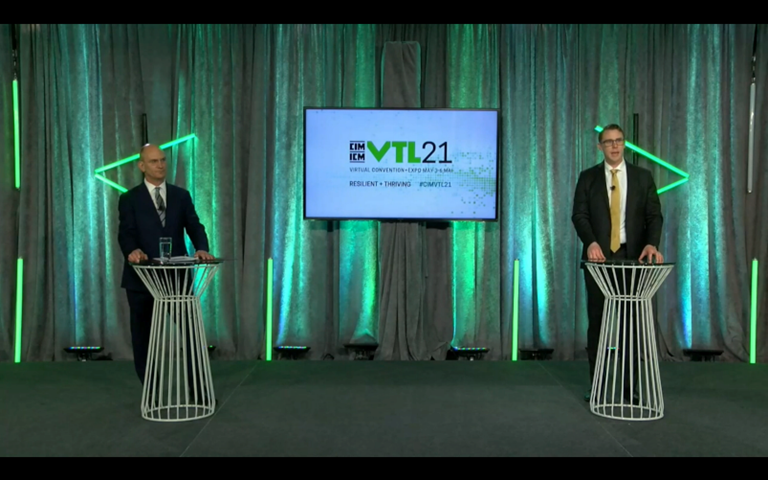 Metals markets are changing rapidly. The end of the COVID-19 pandemic and increased demand for clean technologies and infrastructure have sent the price of metals skyrocketing, indicating the start of a new super-cycle for the mining industry.

However, miners may not be ready to step up and take full advantage of the boom. Stepping on to the stage for his keynote speech on the final day of the CIMVTL21 Convention + Expo, Osisko Metals president and COO Jeff Hussey made the case that the overspecialization of the mining industry has not prepared companies for the increased metal demand, especially for base metals such as zinc and nickel, and that resiliency and innovation will be required to make the changes necessary to fill the need.

“In the 70s and 80s, companies were multi-industry conglomerates. It was the norm, with mining, forestry and downstream fabrication companies that use the commodities they produced to counter the effect of mining cycles,” Hussey said. “In the 90s, mutual funds required companies to restructure so they could measure financial metrics per industry. Concurrently, major mining companies started to reduce or stop exploring, and [instead] prefer acquiring shovel-ready projects.”

The exchange-traded funds boom in the 2010s, according to Hussey, resulted in “further granularity of companies” divided by commodity type or sector. This, plus cyclical 100-year lows for base metal valuations due to market crashes, has disincentivized exploration and development, which has led to underinvestment in the base metal space.

“What is impeding new metals production for the future, in my opinion? The lack of discoveries and development. Specialized funds are disappearing, generalist funds are not interested in early-stage projects, [and] predatory short selling of junior mining stocks is under scrutiny,” Hussey said. “Flow-through funding is great, but it can be a double-edged sword… Juniors now commonly have over 200 million shares outstanding at the feasibility study phase.”

There has been an incredible demand for base metals – thanks to the rise of battery-electric vehicles, renewable energies like solar and wind, and large investments in infrastructure such as United States President Joe Biden’s proposed US$2 trillion infrastructure plan – but not all commodities have the projects required to meet that demand. According to Hussey, “the forecasted rise will require twice the amount of copper and zinc relative to the 2019 supply levels, and four times that of nickel and cobalt. For certain metals this is simply not probable. Zinc and nickel will be challenged going forward.”

For zinc especially, which Hussey says has a “barren” project pipeline, supply underinvestment will likely result in a price shock that could persist for years. With mineral recoveries and throughput already at high levels, further process optimization will not be able to fill the gap.

The solution, according to Hussey, will require major mining companies to make investing in exploration and development a priority again. The Osisko group of companies, which consists of several individual companies focused on exploration, mine development, mining and gold royalties, have allowed for the flexibility to invest in the base metal space.

According to a July 2020 preliminary economic assessment, Osisko Metals Pine Point lead-zinc project in the Northwest Territories has an after-tax net present value of $500 million with an internal rate of return of 29.6 per cent and an indicated mineral resource of 12.9 million tonnes grading at 4.56 per cent zinc and 1.73 per cent lead. According to Osisko, if put into production, Pine Point would be the fourth largest in the Americas and ninth-largest zinc mine worldwide.

Osisko Mining’s development of the Canadian Malartic mine in Quebec – and subsequent takeover from Agnico Eagle and Yamana Gold – led to the creation of Osisko Gold Royalties, Osisko Metals and, recently, Osisko Mine Development. According to Hussey, this kind of diversification allowed the group to hang tough in the face of low metal prices in order to invest in necessary base metals.

“Since inception, the group was focused on exploration, development and production,” Hussey said. “We need several groups like Osisko to meet the significant forecasted demand for decarbonization objectives, including prospectors, developers and entrepreneurs.”

Hussey ended his keynote speech with advice for the industry’s long-term strategy.

“Stay resilient! Meeting metal demand challenges will require more exploration and development in the shorter- and longer-term. Project generation, neglected for the base metal space, is now imperative for the future, especially for zinc and nickel. We must find and develop more mineral deposits to meet upcoming demand, acknowledging innovation is also needed to increase exploration success to supply that project pipeline, and to also continue to reduce mining and milling costs and optimize recoveries further.”

“The future is bright, get ready.”