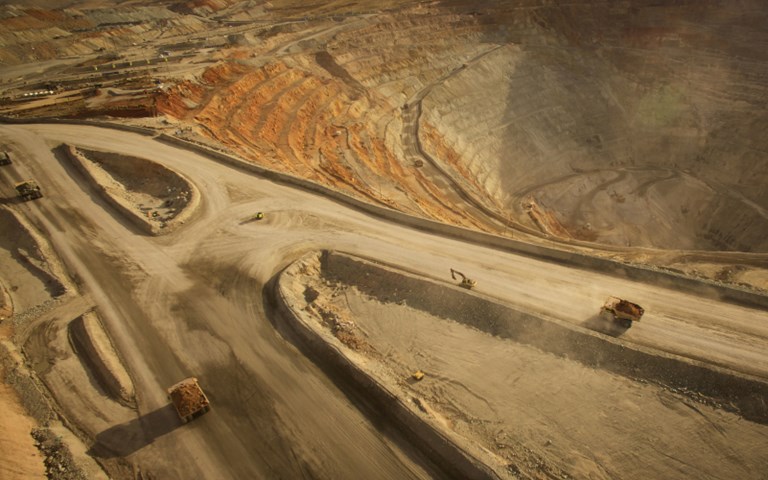 An Indigenous community is blockading the road to Glencore's Antapaccay copper mine in protest of environmental and social impacts related to the operation. Courtesy of Glencore.

Welcome back to your weekly mining news recap, where we catch you up on some of the news you may have missed. This week’s headlines include Teck’s potential transition away from coal, Newmont’s new autonomous fleet and the ranking of the highest risks for mining companies.

The Saik’uz, Stellat’en and Nadleh Whut’en First Nations have challenged Rio Tinto’s control over the Nechako River watershed in British Columbia, as reported by the Vancouver Sun. In the 1950s a dam was built to power the Alcan aluminum smelter now owned by Rio Tinto, which reduced the original flow of the river by two-thirds. The Stellat’en First Nation Chief said the river was converted into an industrial canal without any consultation or compensation – a situation that needs to be reconciled through Indigenous consultation.  Rio Tinto stated that it  is committed to working with the First Nations to review the river’s reservoir management process.

Harte Gold continues to struggle to pay back debts to large lender BNP Paribas even after the two companies agreed to an extension of a forbearance agreement, from Sept. 30 to Oct. 15, as reported by Northern Ontario Business. Harte Gold entered into a forbearance agreement in July 2020 when it failed to keep up with scheduled loan payments to BNP Paribas, breaching the terms of the loan. Harte had turned to BNP Paribas for assistance restructuring existing debt after the mine went into commercial production in 2019. Currently, Harte Gold is reported to be exploring options such as finding a strategic partner, creating a joint venture or selling the company.

An Indigenous community in Peru is protesting against the government and Glencore by blockading a key mining road leading to the Antapaccay copper mine, as reported by Reuters. The community said it plans to stay there indefinitely to protest against the environmental and social impacts of the mine as well as the lack of government engagement on the matter. Earlier this week the Peruvian government, which announced a new cabinet on Wednesday including a new minister for mines, resolved a potential blockage of MMG’s La Bambas copper mine.

Metallurgical coal prices are at all-times highs, yet Teck Resources, the world’s second largest producer of the product, is rumoured to be transitioning away from coal and further investing in copper, as reported by BIV. Teck CEO, Don Lindsay has not confirmed the speculation of divestment but explained in an investor call that it would make sense for Teck to shrink its coal portfolio and grow its copper portfolio, in part because of the company’s goal of reaching carbon neutrality by 2050, as well as the increasing difficulty in getting new coal projects approved.

All the member companies of the International Council on Mining And Metals (ICMM) committed to reaching net-zero emissions by 2050. In an open letter signed by member CEOs, the ICMM says it will continue to set short and long-term goals to achieve this milestone as soon as possible and inspire other industry members to take climate action alongside it. ICMM’s members include some of the world’s biggest mining companies, such as BHP, Rio Tinto, Barrick, Teck and Vale.

Western Australia’s largest gold mine, Newmont’s Boddington mine, has transitioned to a fully autonomous haulage fleet of 36 trucks in a $150 million project that the company says is a first for the gold mining industry. The project faced many setbacks during start up , including severe weather and several operational delays which resulted in lower ex-pit tons than expected. Its 2021 gold production was anticipated to be approximately 140,000 ounces below original guidance estimates of 830,000 ounces.

Artificial intelligence and machine learning are advancing the mining industry as technologies become more common in everyday work environments. Artificial intelligence is being integrated into areas of the industry such as mining exploration, employee training and automated vehicles to make more important and informed decisions.

The Government of the Northwest Territories and the Canadian Northern Economic Development Agency have partnered to award funding in exploration work in the territory’s mineral resources industry. This is the second round of the mining incentive program which gave out $1 million in funding already this year. The program will offer a maximum of five $100,000 awards for detailed exploration or early-stage mineral production projects.

For the first time, mining and metals companies have ranked environment and social issues as their number one risk according to an EY report. Environmental and social impact, as well as decarbonization concerns, have gone up from 2021, with licence to operate, the top worry for the previous three years, falling to third on the list. According to the survey, miners will have a competitive advantage if they demonstrate their contribution to a sustainable and environmentally friendly future.