Canadian mine rescue teams accounted for half of the top 10 teams at the competition
By Ashley Fish-Robertson
November 18, 2022 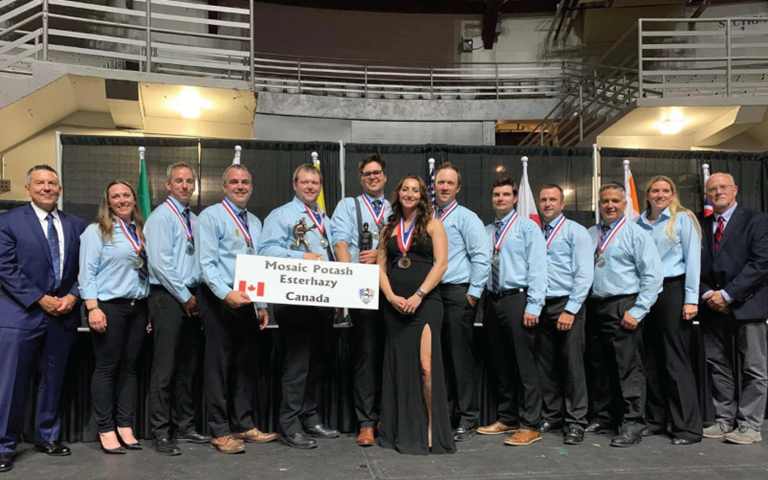 The Esterhazy Mine Rescue team took home second place at the 2020 International Mine Rescue Competition. Courtesy of IMRC.

From Sept. 11 to 16, Mosaic’s Esterhazy Mine Rescue team competed at the 2020 International Mine Rescue Competition, earning second place in the overall competition, with the MSHA Mine Emergency Unit from the United States taking home the gold.

The competition was held in Beckley, West Virginia, where 22 teams from across the globe competed. The majority of events took place at the Mine Safety and Health training academy. The competition was supposed to be held in 2020 but was postponed due to COVID-19.

Teams participated in a series of events meant to test various safety-related skills, consisting of a mine rescue simulation and skills section, first aid, firefighting, a theory-based exam, rope rescue and a technician event. Esterhazy ranked second in the first aid portion of the competition, and Clint Hollingshead, one of Esterhazy’s members, won the technician event.

Another Esterhazy member, Justine Fuchs, also competed in the competition as a member of Diamonds in the Rough, Canada’s all-female mine rescue team comprised of women from across the country. The team earned second place in the rope rescue event, third place in the theory event, and earned seventh place in the overall competition.

One facet of the competition that the Esterhazy team had to get used to was the size of the teams in certain events, namely the underground mine rescue event.

“When we do these types of events at other competitions, we’re used to doing them in teams of five or six, but with the underground mine rescue simulation event, we were set up in teams of two,” explained Greg Sweet, Esterhazy’s mine rescue lead. “That was something totally new for us, so it took a little bit of time to figure out.”

One event that Sweet recalls being very labour-intensive was the team firefighting section, which was fashioned in the style of a relay race. This section involved numerous steps, including each participant lifting two large pails weighing roughly 50 pounds in total, all while being connected to a breathing apparatus that supplied oxygen.

Several other Canadian teams who participated in the competition ranked highly in the various individual events, including Quebec’s Stornoway Diamonds Renard team who ranked second in the mine rescue simulation event.

Sweet recalls being impressed with the performances of the other Canadian teams, noting that “Canada did very well. We had five Canadian teams in the competition, and we all placed in the top ten.”

Sweet added that this competition was a great opportunity for the team to learn new skills and to refine existing skills. It also granted the team the chance to network with talented individuals from around the world.

This was Esterhazy’s first time attending the competition. The last time that one of Mosaic’s Mine Rescue teams attended this competition was in 2008 in Reno, Nevada.

“We’re very thankful that Mosaic gave us the opportunity to go to the competition this year,” said Sweet.