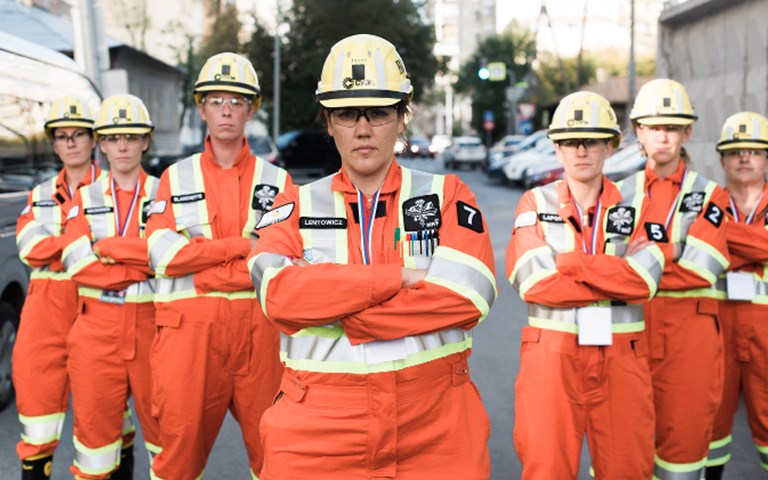 For Kari Lentowicz, the stand-out moment of this year’s International Mines Rescue Competition (IMRC) in Russia was when she injured her leg during the mine rescue relay race.

“I was on the last leg of the relay, and I ended up getting hurt,” Lentowicz said. “My team came in and they finished that leg for me and my captain carried me across the finish line so we finished as a team.”

The incident was symbolic of a competition that might not have resulted in many accolades for the team, but was rich in team-building experience.

“It was amazing, and we got a standing ovation while we did it,” Lentowicz said.

While Canadian teams didn’t make it to the podium at this year’s IMRC, they were honoured with two special diploma prizes.

The competition, which was held from September 22 to 29, took place across different mines in Russia’s Sverdlovsk region north of Kazakstan. Twenty-five teams from 12 different countries – including China, Australia and India – participated in the events.

The two Canadian teams in the competition, Tahoe Canada and Diamonds in the Rough – the team Lentowicz was a part of and the first ever all-female mining rescue team to enter the competition – failed to place in the top three for any of the contests’ eight categories, which included firefighting, first aid and the mine rescue relay race. Lentowicz’s team finished the competition 15th overall.

But the two teams didn’t leave empty-handed. Tahoe Canada was named the “fastest team” and the Diamonds in the Rough were given the People’s Choice award.

Despite not winning the actual contest, the experience of competing was much more rewarding for Lentowicz and the other Diamonds in the Rough, she said.

“Everyone was supportive, every country. Russia accepted us with open arms, and it’s a country where it's actually illegal for women to work underground,” Lentowicz said. “We were the first [all-female] team to ever perform work underground and they were nothing but receptive. So, with the People's Choice award it was great to be recognized for all that we were doing, and also be recognized that as women we were thoroughly accepted by our male counterparts at such an event.”

The majority of the categories were dominated by Russian teams. The Kemerovo MRS team, which took first place overall, was first in four of the eight categories, and placed in the top three in two others. At the end of the competition, Kemerovo MRS and Rubana VMRT, both Russian teams, took the gold and silver medals, with the Komir team from Kazakstan taking bronze.

The Diamonds in the Rough made their way to Russia thanks to a GoFundMe fundraiser, allowing them to participate without having to pay out-of-pocket.

This won’t be the last that the IMRC has heard of the Diamonds in the Rough. Lentowicz said that she plans to compete again next year with new additions to the team’s roster and even train a youth team for a similar competition held in Texas.

“My hope is to ... not just have the women that we had this time, but train more women so that they can compete,” Lentowicz said. “One of the goals of our non-profit is to bring awareness to diversity and inclusion, and the reason we want to train women is because it gives their mine sites an opportunity to see how well women do.”