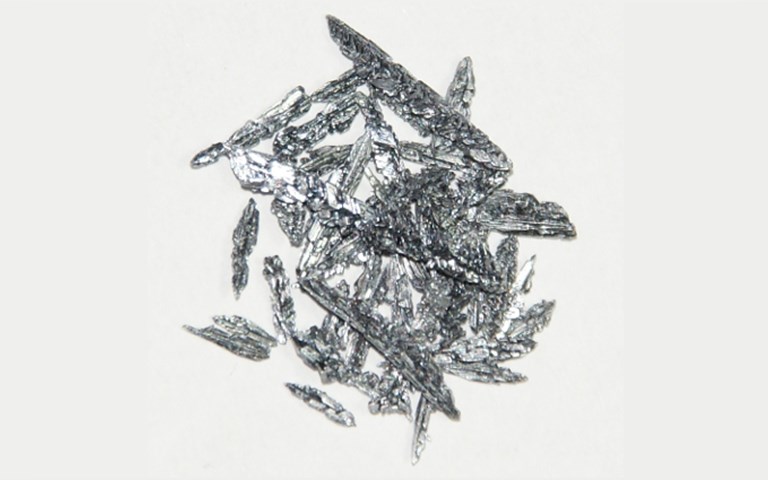 In the 1960s, Union Carbide was looking for vanadium across the United States when it discovered a large high-grade near-surface deposit in north central Nevada. Although the location was desirable for many reasons – it was close to highways and rail lines, for example – the company could not find an economically feasible way to extract the metal in those days, which is primarily used in steel production to increase strength and corrosion resistance.

For decades, the deposit sat undeveloped. But then Vancouver-based First Vanadium acquired it in November 2017 just as vanadium prices were on the upswing, and the company now hopes to advance the project to production. “Vanadium wasn’t on anyone’s radar screen,” said Paul Cowley, president and CEO of First Vanadium. “It had been a low-price metal for decades.”

That has changed suddenly and dramatically. According to a recent mining.com article, the price of vanadium pentoxide (V2O5) is up 550 per cent since September 2016. In October, vanadium hit a 13-year high at US$118 per tonne in Europe.

There are a number of converging factors that explain the story of vanadium’s rising star. “Supply and demand factors have completely changed,” said Cowley. “Since 2013, there’s been a 3.5 per cent increase in demand annually. But the supply deficit has widened over the past five years, and over the past three years the metal price has responded.”

Many of those supply and demand factors can be traced to China. Cowley said that over 60 per cent of vanadium on the market is supplied by China, which could bring on more from stone coal plants as soon as prices increase. Normally, that would ultimately force down prices, but China recently shut down several large plants due to environmental concerns, particularly because of eroding air quality, and has introduced tough new regulations.

China also previously had a practice of extracting vanadium from scrap metal, but there is now a ban on much of the industrial metal waste coming into the country – also part of the country’s ongoing efforts to curb pollution – so that is yet another supply line that has been taken out of the equation.

But Cowley said that prices are rising because of another Chinese initiative: making an effort to improve the quality of steel being used for large-scale infrastructure projects. A source of persistent scandal across the country has been the devastating performance of Chinese construction in powerful earthquakes, particularly during events such as the 2008 earthquake in Szechuan province, which killed an estimated 90,000 people.

In February 2018, in order to address concerns about inferior and unsafe building practices, the Chinese government announced a new high-strength rebar standard for steel that became law in November 2018. The law requires that rebar manufacturers use more vanadium to reinforce the steel being used. “That was the last push to drive metal prices higher in September and October 2018,” said Cowley. “Now Chinese rebar manufacturers need new contracts to secure more vanadium than was needed before.” The demand for steel, and therefore vanadium, has also been linked to a large number of infrastructure projects that were kicked off in 2018, particularly in China and Russia.

The potential of battery storage

While the use of vanadium in steel is by far the biggest application, there is another use for the metal that is currently a small corner of the demand but points to potential growth in the future: batteries. Vanadium is used in redox flow batteries, which are sometimes billed as a better alternative to the increasingly ubiquitous lithium-ion battery. “It has a longer shelf life, doesn’t deteriorate, can store and discharge at the same time and is less flammable and more stable,” said Cowley.

These redox flow batteries have found specific application in power company grids, where they help modulate energy peak loads and perform a backup function. They enable companies to buy and store power when it is cheap, and discharge it when it is expensive. “The batteries can help them be more profitable,” said Cowley.

Related: When it reached capacity in 2015, Largo Resources’ Maracás mine became one of the largest primary producers of vanadium in the world

Willis Thomas, an analyst with CRU Consulting, said that the potential for redox batteries in a stationary storage application is quite high. “If we look out to 2030 or so, we can see vanadium redox flow batteries becoming not only a material part of the energy storage landscape but a material part of the vanadium demand,” he said. Thomas said he expects peak prices to recede, giving vanadium a better economic profile. “They could begin to really take up material demand, taking up thousands of tonnes per annum,” he said.

First Vanadium is understandably keen to get its Carlin Vanadium project going, and its product to market. The company has not yet reported any Measured or Indicated Resources, but a mineral estimate made by SRK for the previous project proponent Energy Metal Corp. in 2010 reported Inferred Resources of 289 million pounds of V2O5 at a grade of 0.515 per cent within the Carlin deposit.

Cowley said he expects to announce a mineral resource estimate in early February and he hopes to get the vanadium to market in five years, barring any complications with financing or permitting. Cowley said he is optimistic the process of approvals will be relatively streamlined, thanks to vanadium’s addition to a U.S. Geological Survey list of critical and strategic metals.

Of course, First Vanadium is not the only project looking to take advantage of vanadium’s newly shining status. Canadian Mining Journal recently reported that Canada’s VanadiumCorp-Electrochem processing technology was acquired for use by Ultra Pure Systems in the world’s first dedicated vanadium processing facility in Australia.

Outside of China, there are plants in Russia, South Africa, and Brazil, with a smattering of small projects in Southeast Asia and elsewhere. Thomas said a number of mining projects around the globe are presently weighing the costs of extraction, especially while the market for the metal remains relatively small. “You’re talking less than 100,000 tonnes of end product total per year,” he said. “Most projects come online at 2,000 to 5,000 tonnes per annum, so it becomes a very big part of the market fairly quickly.” In addition to assessing grade, companies will have to determine what end product they want to bring to market, whether that is ferro-vanadium, which is tied to the steel market, or vanadium pentoxide, which is used to produce ferro-vanadium and is a compound present in the electrolyte in redox flow batteries. “It really depends on a project-by-project basis,” he said.

Cowley is betting that even increased production from various projects, which will take some time to come to fruition, will not drive down prices significantly in the face of growing demand. The biggest question is where vanadium prices will settle once they begin to stabilize. “They’ve been on the rise for three years but no one knows where they’re going to land,” said Cowley. “But one would hope that they would stay quite perky.”