All in for electricA novel all-electric graphite mine in Quebec is closer to reality, as the company, Nouveau Monde Graphite, has both a feasibility study and an offtake agreement for its Matawinie project

A novel all-electric graphite mine in Quebec is closer to reality, as the company, Nouveau Monde Graphite, has both a feasibility study and an offtake agreement for its Matawinie project
Robert Hiltz
February 14, 2019

Located 150 kilometres north of Montreal, in Saint-Michel-des-Saints, Nouveau Monde Graphite’s proposed open-pit graphite mine is planned to extract as much as 100,000 tonnes per year of high-grade graphite. But what really sets it apart are the plans to do away with diesel equipment.

Nouveau Monde CEO Eric Desaulniers said this innovation is an attempt to go where the future of mining technology will be. “The main reason is we’ll be building that mine in 2020 and we’ll be operating for over 25 years, so we believe in the future everything will become slowly but surely all-electric,” Desaulniers said.

The Matawinie project is proposed as an open-pit battery-electric truck and cable-electric shovel operation, with a semi-mobile in-pit crushing and conveying system, according to a feasibility study released in December 2018. There will be an onsite concentrator as well, with an output capacity of 100,000 tonnes per year, which will operate all day, year round. The life of the mine is expected to be 25 years and will employ between 60 and 70 people. The initial cost to build the project is estimated at $283 million.

The mine has a Probable Mineral Reserve of 59.8 Mt containing 4.35 per cent graphitic carbon, which would provide 2.52 Mt of graphite concentrate over 26 years. The pit will be 2.6 kilometres long and 380 metres wide at surface with a maximum depth of 235 metres, according to the study prepared by Met Chem/DRA. 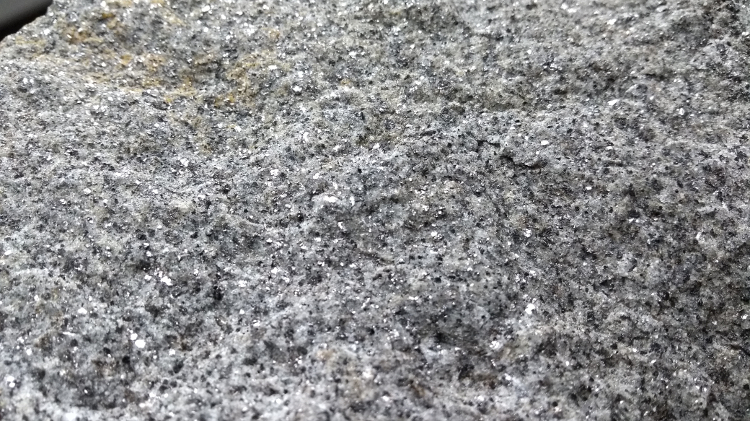 The mine will need a 120-kilovolt powerline, but its proximity to the town of Saint-Michel-des-Saints and its power grid means that massive and costly grid extensions are not necessary to make the project feasible.

There are some challenges of having an electric fleet that go beyond the relative newness of the technology. The range of the haulage vehicles is limited compared to traditional diesel equipment. This in itself is not a huge obstacle to overcome, the distances in a mine are not vast, but charging the vehicles without overloading the system does add a layer of logistical complexity that you will not find filling up a diesel tank.

“We need to charge for at least 30 minutes to be to be functional, so it’s important to manage the charging time versus operational ability to minimize downtime,” he said. “You have to make sure that one truck is charging while other trucks are loading, so time management becomes crucial.”

This will mean staggering lunch and other breaks to make sure there is a rotation of equipment charging, rather than everyone all at once, he said. Support vehicles such as graders, however, will rely on battery technology that requires less frequent, but longer charging sessions.

Desaulniers said the plan is to operate for 16 hours a day. For the remaining eight hours at night, the vehicles can slow charge which draws less current, so the fleet can be fully charged by morning.

It likely will not be the first all-electric mine in the country  – Goldcorp has a head start with its Borden Lake underground mine – but it would be the first open-pit operation, he said.

David Lyon is the business development manager at the engineering firm MEDATECH, and has worked on both the Borden Lake and the Matawinie projects, getting the companies set up for all-electric operation. He said one of the primary challenges for mining companies making the transition is about changing their mindset.

“It is more of a philosophy, and it takes big thinkers like Eric and the team at NMG to realize, ‘Oh, look at this. Is this possible?’” Lyon said. “And with the right cost of energy, it’s not only possible, but it’s going to be cheaper to operate than the diesel fleet. So there’s really no boundary.”

He said once Goldcorp had shown what was possible with an electric fleet in its Borden Lake mine, other companies were able to see the benefits. Lyon said he thinks a similar pattern will follow for surface operations if Nouveau Monde is able to provide a similar proof of concept.

Much of that different philosophy comes from treating electric equipment differently than you would a traditional diesel fleet. This is where the logistical changes regarding battery charge that Desaulniers spoke of come in. Once that is sorted out, Lyon said there are many advantages to electric vehicles, in addition to the positive effects on the environment. 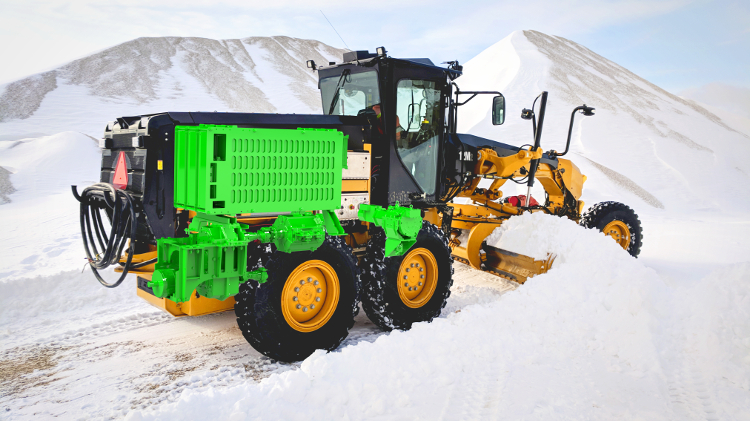 Support equipment can also be retrofitted to run on battery power. Courtesy of MEDATECH

“Because the diesel engine is quite inefficient, if we’re going to place a similar-sized powertrain in kilowatts, then we’re actually able to use more of it based on the efficiency of the system,” he said. “And so you can either reduce the power train – so put a smaller electric motor to match the performance of the diesel engine – or, if you’re going to put the same one on, you’d have more usable kilowatts, which can translate to speed and torque.”

As for the environmental benefits, according to a third-party study done by Globepro International, the results of which were shared with CIM Magazine, the company expects the mine to release 8,545 fewer tonnes of CO2 per year, when compared to a conventional mine of this size running under diesel power.

Desaulniers said he does not expect this to weigh in on whether the environmental permits for the mine are approved, as the company submitted its proposals as if it were to operate using diesel equipment. “In our environmental studies, we’re using diesel trucks [as the benchmark] just for noise and gas emissions purposes,” he said. “We’re making the worst-case scenarios.”

Besides, Desaulniers said, the environmental studies are primarily concerned with how tailings and operations affect the immediate environment.

The benefits of being one of the first electric open-pit mines is not just the reduced carbon footprint,  but also the ability for industrial electric expertise to be built up around the operation.

“There’s a lot to be gained by the government because it’s not only our mine that is saving on greenhouse gases, but it is about developing the expertise of converting diesel engine to all-electric equipment. So there’s an expertise to be created in Quebec that could be exported out of Quebec,” he said.

Nouveau Monde plans to apply for grants at the federal and provincial level once it gets a demonstration truck and charging station up and running. They are also hoping to be able to negotiate better electricity rates with Hydro Quebec.

Desaulniers said the company decided to increase the maximum production to 100,000 tonnes per year – almost double what was expected in the pre-feasibility study – after looking at projections for global demand over the next several years. This was coupled with an improved outlook on geological surveys and drilling, which show the graphite deposits to about triple the size of what was initially thought. The mine could therefore handle the increased production, without having an effect on overall mine life.

Until the mine is fully operational, the company is running a demonstration plant producing about 1,000 tonnes of graphite concentrate per year from its deposit to prove the quality of the product to the market. Desaulniers said the graphite deposit has given them a concentrate purity of 97-98 per cent, with a jumbo flake size, after flotation. This puts it among the highest grades of natural graphite.

Graphite is broken down into multiple categories: crystalline flake, amorphous, and lump. Nouveau Monde produces crystalline. Graphite is used in all sorts of manufacturing from pencil lead to lubricants to lithium-ion batteries. According to a paper published by the United States Geological Survey, natural graphite is currently the preferred form of the mineral, as it is cheaper than synthetic graphite and can be purified to 99.9 per cent after further refining.

The value of the graphite depends on its purity and the size of the flakes, with the largest flakes fetching the best price, as these are the raw material for fuel cells as well as spherical graphite, which is used in anode manufacturing for batteries. The Matawinie project is expected to yield a range of sizes from large to fine. The feasibility study lays out average prices over the first five years of the project based on flake size and purity ranging from US$1,065/tonne for the fines to US$2,548/t for the largest flakes. On February 14, the company announced an offtake and marketing agreement with the commodity trader Traxys Group. For 2019 and 2020, Traxys will receive 400 tonnes of Nouveau Monde's graphite concentrate from its demonstration plant to shop around to end users. Once the mine goes into production, Traxys will market 25,000 tonnes per year, with that number dependent on demand and production capacity.

When putting together its feasibility study, Nouveau Monde decided to increase its maximum production so it would be able to meet an increase in forecasted global demand, fueled in part by a number of planned battery factories across North America in the coming years.

“It makes sense for us to put in all the hard work of doing the permitting and to design at a larger scale, and, worst case, in the mid-2020s, if we realize the market might not be where we think it will be, we can always go back to 50,000 tonnes a year, but we really believe the market will be there to justify a larger mine.”

In the early 2020s, North America’s biggest graphite mine, run by Imerys Graphite & Carbon in Lac-des-Îles, Quebec, is expected to reach the end of its life. At that point, there will be no major producers of graphite on the continent.

This gives Nouveau Monde one of its advantages for the proposed mine: its proximity to many American battery producers, both online and planned, scattered through Michigan, Ohio, and Pennsylvania. All of these are within trucking distance, which makes supplying them directly logistically straightforward.

Plus, those are areas with major steel production, in which graphite is an important, though smaller, ingredient. Desaulniers said steelmakers are not as concerned with getting the absolute lowest price on graphite because it makes up a smaller part of their requirements for steel production. “They want something reliable in a safe jurisdiction close to their plants so they buy from Imerys here, even though their cost is a bit higher.”

And as that go-to option for graphite is expected to reach the end of its life in the next few years, Nouveau Monde is aiming to pick up that slack.