The overhead mining system relies on a ceiling-mounted monorail system long-used in the underground coal industry of Europe. Courtesy of Torex Gold

“Mining is really a logistics business, a material handling business,” said Fred Stanford, president and CEO of Toronto-based Torex Gold Resources Inc. “We do drilling, blasting, and ground support up front, but everything else is moving stuff.”

Formulating a solution to this problem occupied Stanford’s thoughts for the past 30 years. Imagining an efficient new mining system was his “weird hobby” until, he said, the final piece of his puzzle fell into place at three o’clock in the morning about five years ago. With the final hurdle cleared, he approached the Torex Gold board of directors with a plan and set to making his dream a reality.

Stanford’s system creates two-lane transport in an underground tunnel half the size of a conventional mine tunnel. He named it the Muckahi mining system, after a rallying cry he would give to start shifts when he was mine supervisor at INCO. A Muckahi mine has twin roof-mounted monorail lines installed in steep, narrow tunnels. At the face, ore is scooped onto a conveyor system by old-school slushers, loaded onto conveyors suspended from the monorail line, and transferred to ground-mounted conveyors that carry it up ramps four times steeper, and therefore much shorter, than those in a conventional underground mine. The ore is picked up once at the face and deposited at the processing plant in a continuous flow. There are no trucks and the system relies on technology adapted from old-school mining and other heavy industries.

“This is the antithesis of digitizing everything,” Stanford said. “This is just good old process engineering.”

By Stanford’s calculations, this complete re-think of underground mining will cut the average capital cost of building a new mine by 30 per cent and reduce the operating cost by the same percentage. The time between initial investment and a producing mine generating revenue could potentially be reduced by up to 80 per cent, and underground greenhouse gas emissions could be brought down close to zero.

Replacing haul trucks with a rail system has several advantages, the first being size. The mining industry is trending towards larger and larger trucks able to carry more ore per single trip, but this requires excavating and maintaining larger tunnels to accommodate them. If a 50-tonne truck requires a tunnel 5.5 metres wide and 5.5. metres tall, the tunnel will be 30.25 square metres in cross-section. In contrast, two long, narrow train cars, each about 1.5 metres wide and similar in size and shape to a Toronto streetcar, can pass each other in a tunnel that is just four metres by four metres, or 16 square metres in cross-section. Tunnels that are half the conventional size require less excavation of rock, and a much smaller volume of air to ventilate during operation.

However, Stanford recognized that long, skinny vehicles tip over easily and can be knocked off their tracks by any small- to moderate-sized rock in their path. To solve this issue, he turned to the European coal industry where roof-mounted monorail systems have been in operation for 40 years. The rails are mounted to the roof because rock stress causes the floor to heave, but the roof moves much less. Also, by suspending the monorail from the roof with a chain, if the tunnel does squeeze in, the links on the chain can be adjusted to keep the monorail level.

Another benefit of the monorail over a truck fleet is the angle at which it can operate. Trucks cannot travel up an incline greater than 10 degrees without the tires spinning and losing traction, but a monorail can climb an incline over 30 degrees. If the ramp angles in conventional mines are about seven degrees, then the monorail can operate in a tunnel four times steeper.

“If we can go four times steeper, to achieve the same elevation change, our tunnel is only one-quarter the length,” said Stanford. “At a quarter of the length, we get there faster.”

But even with a roof-mounted monorail installed in the straight drifts heading down to the mining areas, a solution was still needed for the problem of how to move freshly blasted muck, with two-way traffic, in small tunnels that had curves.

“The answer that occurred to me at 3:00 in the morning was a flexible conveyor that travelled on the monorail,” said Stanford. “We can put in straight drifts and conveyors when away from the ore. However, once we get close to the ore, we need to access it based on the geometry of the deposit. The conveyor needs to be able to bend around corners.” 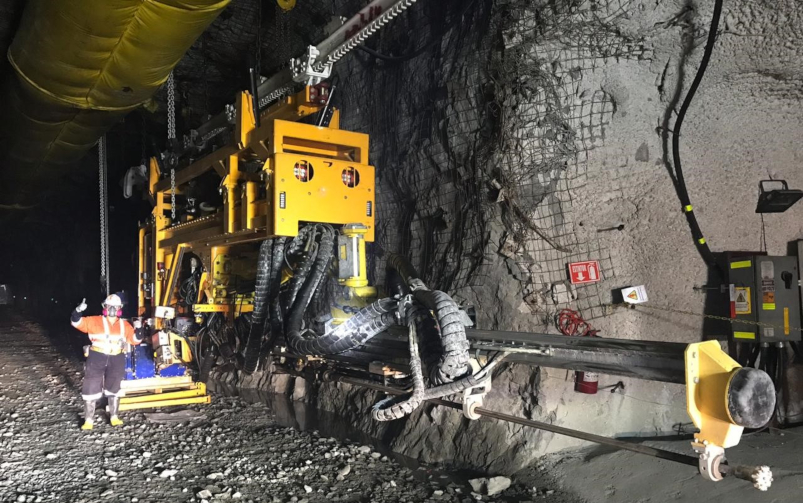 An old solution to a new problem

The Torex team ruled out using a scooptram or similar because such loading equipment would require a larger tunnel to be excavated to move and turn around.

“The solution was an old-school slusher,” said Stanford. Simple and reliable, it is a two or three drum winch system that pulls a scraper back and forth. On the pull stroke the scraper pulls muck onto the tail end of the flexible conveyor.  On the return stroke the scraper returns for the next load. The mining industry had stopped using slushers several decades ago due to safety concerns that could not be resolved at the time.

One risk involved workers positioning the return pulley where it needed to be, out under unsupported ground. But, said Stanford, with a roof-mounted monorail, a boom projecting out beyond the end of the monorail, can safely position the return pulley under unsupported ground with no workers exposed to that risk. The muck can be scraped straight onto the conveyor, which is also mounted on the monorail.

“With twin monorails in the tunnel, one inbound and one outbound, a second flexible conveyor can be waiting on the inbound rail.  “When the first one goes by, the second one pulls in right into the loading zone.  In effect, mucking becomes continuous.”

Related: Collaboration between Anaconda Mining and Memorial University could unlock narrow-vein gold deposits around the world

Stanford describes blasting and rock fragmentation as the “Achilles heel” of the Muckahi system. The system cannot handle large rock the way a giant haul truck can. The ore must be blasted finely enough to be moved by the system of conveyors that will transport it to surface. This means extra care is required by the miners planning, drilling, and placing explosives. Closer-spaced boreholes during the blasting stage ensure smaller fragmentation, but the drilling and blasting stage will cost more.

“You spend more money on that,” said Stanford. “But, as everybody knows, the cheapest way to break rock is with explosives. So, the money we spend in blasting, we expect to save in the SAG mill.” The finer muck from the mine passes more quickly through the SAG mill, saving time and energy in the processing plant.

More than a pipe dream

El Limón Gaujes Complex includes three open pits and two underground operations within Torex Gold’s Morelos gold property in the Guerrero Gold Belt south of Mexico City. It went into production in early 2016. Around that time, Torex Gold hired Medatech, an Ontario-based mechanical engineering firm, to re-design and modify equipment for the new mining system. Torex Gold uses Epiroc jumbo components and purchased the running gear for the monorail “off the shelf” from Becker Mining Systems in Poland. Although there is not a lot of new technology in the system, there was much to be done to determine how to make the equipment narrow and stable for operation on the monorail system.

In the second quarter of 2019, a dedicated team began commissioning Muckahi equipment in El Limón Deep (ELD), one of the two underground operations at Torex Gold’s ELG Complex. Following the success of that test, run during the third-quarter of the year, Torex declared the ELD deposit as a ‘Muckahi Mine’ and moved it beyond testing components to testing the integrated Muckahi Mining System. That work is ongoing and progressing well, said Stanford.

The steep ramp conveyors in a Muckahi mine are electrically powered and connected to the grid, so diesel is not required for the heavy work of lifting ore out of the mine.  The flexible conveyors operating on the levels can be battery powered. In Torex’s Media Luna Project, the concept includes a conveyor in a step ramp that operates downhill. This conveyor could convert the potential energy of gravity into electricity for further cost reductions in energy.  “We have a conveyor like that at our ELG mine now,” Stanford said. “It generates almost a megawatt of power.  Transporting ore on that conveyor makes money rather than costing money.”

Eliminating diesel-powered haul trucks from the underground environment will reduce greenhouse gas emissions, diesel particulate and dust within a smaller cavity. As a result, less energy will be spent on ventilation.

Torex Gold intends to complete the testing of the Muckahi Mining System over the next year or so, and Stanford said the company anticipates being able to use it in mining its nearby Media Luna deposit, for which planning is underway to have it in production in four to five years. Media Luna is at the feasibility stage and will be connected to the ELG Complex processing plant by a new seven-kilometre tunnel. Torex Gold may begin driving the connecting tunnel as early as next year, but for now, the processing plant will be busy with material from the ELG Complex until mid-2024.

“Our goal is to design Media Luna with the Muckahi mining system,” said Stanford. In the meantime, he is happy to discuss with other miners how they might put this idea to the test.