Baffinland brings Arctic experience to bear in the commissioning of its Mary River project
By Eavan Moore
February 01, 2015 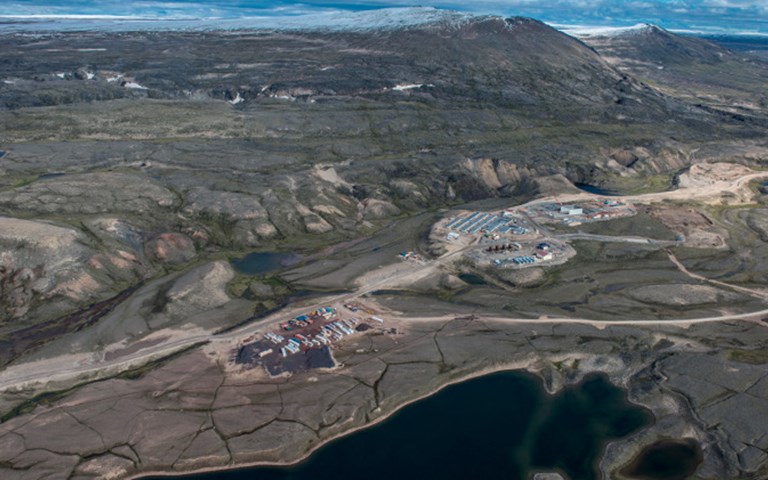 While the frigid temperatures at the project demand many adaptations, the ore, at an average grade of 67 per cent iron, requires little upgrading before shipping | All images courtesy of Baffinland Iron Mines

With Measured and Indicated Resources of more than 350 million tonnes of high-grade iron ore, Mary River was a challenge worth accepting. In 2010 steel giant ArcelorMittal battled private equity firms for a majority stake in Baffinland Iron Mines. In the wake of the downturn in commodity prices, ArcelorMittal reduced its share to 50 per cent but continued to serve as operator. The downturn also spawned changes to the mine plan: Baffinland has indefinitely postponed its original $4-billion vision of a rail line carrying 18 million tonnes of ore yearly.

Instead, Mary River’s $750-million early revenue phase involves stockpiling and shipping 3.5 million tonnes of ore per year using the July-October open water season in Milne Inlet on the northern shore of the island. At an average grade of 67 per cent iron, the ore requires little processing before it is shipped. It is drilled and blasted at Deposit 1 – the first of nine known deposits – using explosives produced at an on-site plant. The ore is hauled to a mobile crushing plant, the products of which are stored in separate stockpiles for lumps and fines.

By July both types of ore will be trucked to Milne Port, where stockpile infrastructure and a shiploading dock are currently under construction. A two-tower radial ship loader and reclaim conveyor system will load chartered vessels, and the ships will travel through Baffin Bay en route to the open Atlantic.

Mary River is neither the first Arctic mine constructed in Canada nor the most northerly one, considering that the Polaris mine was on Little Cornwallis Island. So the project benefited from an array of existing expertise.

“In the team that we assembled, most of us had worked on those other projects in Canada’s North,” says Ronald Hampton, vice-president and project director at Baffinland. “We have had some of the construction contractors who were involved in Agnico Eagle’s Meadowbank come to our job. We’ve had people from Ekati and Diavik, from Voisey’s Bay in Labrador, from Raglan and other mining locations. Myself, I was at both the Diavik build and at the Voisey’s Bay build, so these types of conditions and logistically challenging Arctic projects were not new to me or many others in the chain.” 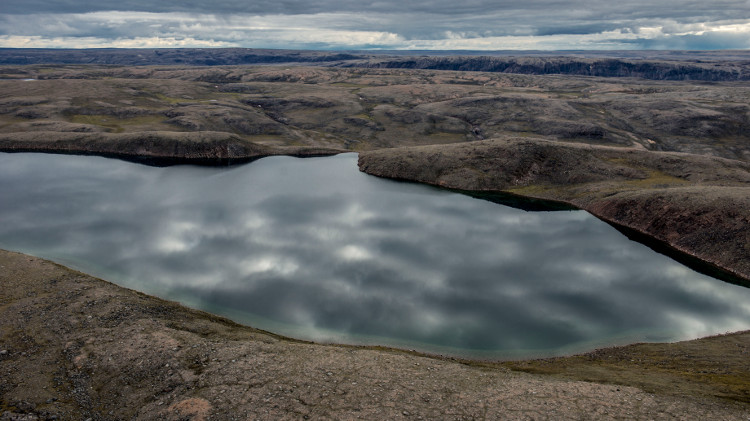 The project is 500 km north of Artic Circle, on the northern end of Baffin Island.

In the course of working on other projects, these experienced members of the Baffinland team had learned to rely on off-site prefabrication. This allowed them to minimize the work that would have to occur in the more challenging conditions on site. Buildings were all prefabricated or panelized and shipped to site for final assembly, including all building foundations, which were pre-cast as concrete blocks and shipped to site to avoid dealing with pouring concrete at -30 C, the average winter temperature at Mary River.

Contractors did a substantial amount of the construction work, but Hampton says the majority of the earthworks were performed by Baffinland-hired operators. “Given that we are a mining company, our business is moving earth, if you will, in the form of ore,” he points out. “With the mining fleet at site, we had our own equipment available to us.”

That allowed the company to bring in its permanent workforce earlier than it might have otherwise, providing an opportunity for these workers to become fully trained and comfortable on site when mining commenced. Most of the people mining in September had already spent the last six to nine months upgrading the road and preparing the outdoor surfaces for construction and storage. They worked largely on a two-week rotation, flying in from the five closest communities to the mine, from the territorial capital of Iqaluit, and from Kitchener-Waterloo, in Ontario. 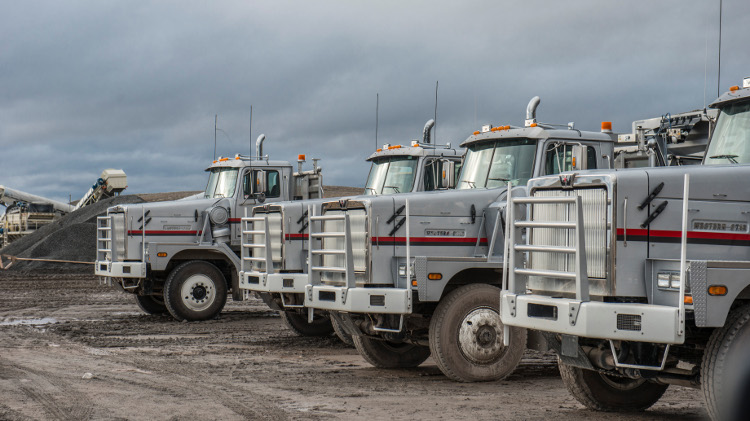 Large equipment can only delivered to the site during the summer shipping season that generally spans from late-July to October.

The entire 700-strong permanent workforce comes from Canada, and between 200 and 250 are residents of the local communities. According to Erik Madsen, vice-president of sustainable development, health, safety and environment, local communities gave generously of their knowledge. For example, traditional knowledge helped Baffinland mitigate the impact shipping has on sea ice travel routes used by the Inuit as well as choose its future shipping route through Northern Foxe Basin, skirting areas important to marine wildlife.

In addition, says Madsen, “Traditional and local knowledge about caribou abundance trends and distribution was essential to the project’s effects assessment and mitigation planning. Our surveys told us very little about caribou ecology in the region. While there were signs of caribou presence, we found very few. Knowledge from elders and current hunters shared with us helped us characterize the 60-to-70-year population trends, likely recovery patterns, and interesting insights about caribou adaptive behaviours.”

At Mary River, shutting off equipment during downtimes and letting it cool is not an option. “On any piece of equipment, the engine and any fluids will all have trouble at low temperatures,” says Hampton. “Heavy equipment is very hard to get going again at those temperatures. So if we don’t have a heated area to warm these vehicles to start them again, generally they’ll operate or run at idle temperatures for most of the cold weather season.” 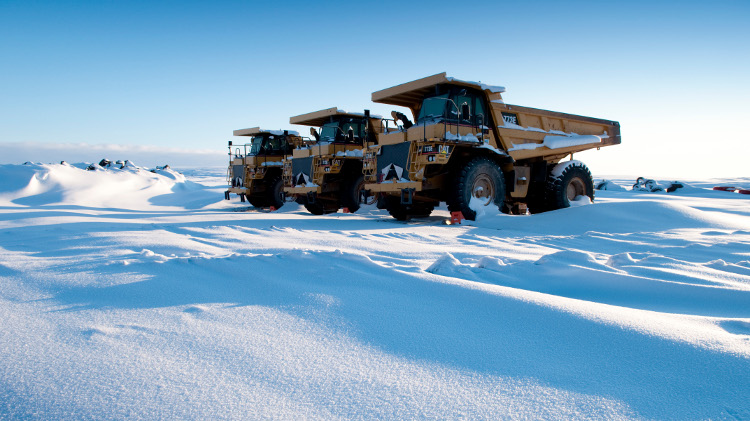 Too big to be flown in, haul truck tires are among the items the mine must keep in large supply on site to avoid work stoppages.

Keeping equipment warm was a little tough in the fall and winter of 2013. All materials and equipment had come in on the summer sea lift, including the majority of the prefabricated buildings. Maintenance had to take place alongside the installation of buildings and the operating of equipment, often outdoors or in rudimentary fabric structures. Hampton acknowledges it was “a trying season.” Even with experience, Hampton says the team underestimated the difficulty in getting the right hydraulic fluid and lines for these conditions. But this year, he says, “It’s a different situation, in that we have our maintenance facilities, the buildings, up and fully operational. So we are in a much better situation to face the cold weather this year than we were last year.”

The Mary River maintenance crew has had time to assess the needs of its equipment, and the extensive use of coldweather modifications has kept machinery running. Mining equipment is fitted with Espar heaters integrated into the engine’s coolant and hydraulic fluid systems. This keeps the fluids in a liquid state, distributes warmth through the vehicle’s heat exchanger, and warms up the engine using residual heat in the cooling water. Petro Canada all-season lubricant is used to keep gears moving smoothly. The smaller support equipment uses Wabasto coolant and hydraulic heaters and Rayco Chemical aviation hydraulic fluid. A wind shelter around the machinery house shields it from blasting cold, and trace heating elements along air and water lines protect the production drills.

Collapsing a year’s worth of need into one summer sealift requires careful planning. If critical supplies run out, it costs about $100,000 to charter a 737 combi aircraft from Kitchener - Waterloo. “I’d venture to say that it’s 10 times the cost of sea freighting something in,” says Hampton. 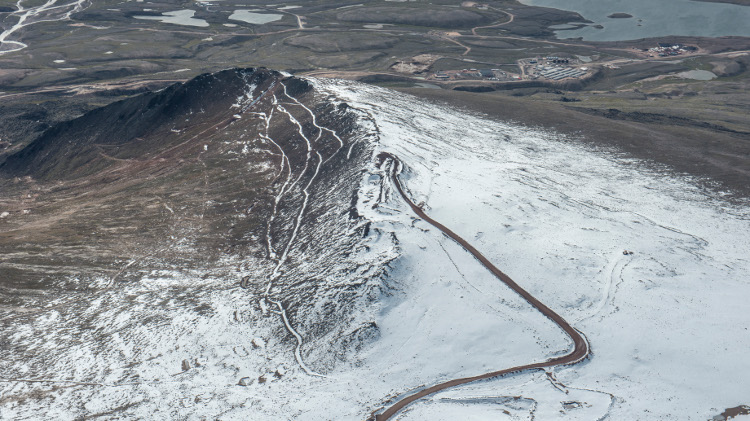 Mary River's Deposit 1, seen from the sky with the camp in the background, has an anticipated life of 21 years.

Some items cannot fly at all – like the tires on a Caterpillar 777 haul truck. “Tires like those just don’t fit into an aircraft,” says Hampton. “Hence, we make sure that we have a contingent of tires over and above the normal planned wear cycles. This is because, for our particular mine site, for example, we have four 777 haul trucks and we rely upon those for our mining effort. Running out of tires prior to the next sealift has the potential to shut down the entire operation. We probably have in the area of $10-million of those types of components sitting on our mine site that would not be a requirement if we were in a southern location with year-round access.”

With the help of suppliers, Baffinland estimates what it will likely consume in the full year, and it then adds about a 15 to 20 per cent overstock in case of emergency. Lower-cost, but high-volume or high-weight components tend to be overstocked; smaller components may not be stocked as generously because they can be flown in if there is need. “No matter how much planning we’ve done, we have found ourselves where we’ve had to fly elements in,” admits Hampton.

The cold does not always hinder the work at Mary River, and at least once it has proved helpful. Last winter an existing airstrip needed to be upgraded to allow jets into the site. During the several months it was out of service, the company constructed an airstrip on one of the frozen lakes. “We were landing 737 jet aircrafts on the lake,” comments Hampton. The required thickness for landing on ice was 54 inches. At the end of the season, he says, the ice was approaching 80 inches.

And all of this – trials, successes, construction and operation – was achieved with a strong safety record. Hampton notes that Baffinland reached two milestones last September. First, the company had transformed itself from an explorer, to a developer and finally to a mine operator. The other milestone: three years without any lost-time injuries. “How well we’ve developed the safety culture at our site is something we are all quite proud of,” he says.