The competing priorities along the way to development in the Ring of Fire
By Alexandra Lopez-Pacheco
December 19, 2017 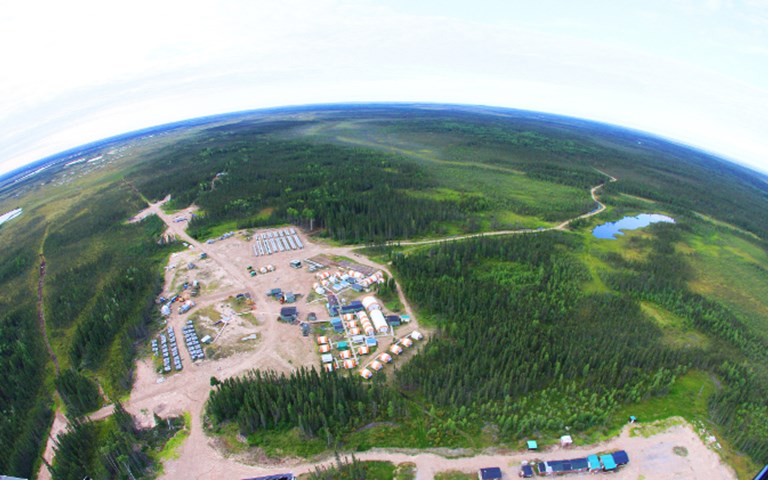 The agreement was focused on the Ring of Fire, a 5,000-km2 mineral belt described by Premier Kathleen Wynne as one of Ontario’s biggest mineral opportunities in almost a century. Rich with nickel, copper, platinum and one of the world’s largest chromite deposits, it is estimated to be worth some $60 billion. But development in the Ring of Fire had hit roadblock after roadblock in negotiations for close to a decade. Nevertheless, there was hope in the air on that historic day when the government and all nine First Nations, whose traditional territories would be affected by the development, signed the agreement.

Last August it seemed as if the approach was indeed paving the road to development. The government announced an agreement with three Matawa First Nations – Webequie, Marten Falls and Nibinamik – to build a $1 billion all-season transportation corridor proposed by the communities, which are currently accessible only by air and seasonal roads. The environmental assessment would begin in 2018. Construction on the new corridor that would connect the communities – and the Ring of Fire mining development – to existing provincial highways would start in 2019. The major impediment to mining development, which lacked the infrastructure to transport its ore to market, had finally been lifted.

Three days later, the chiefs of the Eabametoong and Neskantaga First Nations expressed their frustration at having been left out of the discussions. “The reality is that all the roads to the Ring of Fire traverse the territory of our Nations, and nothing is happening without the free, prior and informed consent of our First Nations,” said Neskantaga Chief Wayne Moonias in the press release.

The path of reconciliation is a complicated process, admitted Michael Gravelle, Ontario’s minister of northern development and mines. That said, the Ring of Fire remains a negotiation process “that is basically focused on working with the First Nations to move forward with things they’ve identified as being crucial for them to support this development.”

In regards to the concerns cited by the Eabametoong and Neskantaga Nations, Gravelle pointed to the government’s agreement with the three Matawa Nations as simply being one step in that process. “We will continue to work with all nine Nations,” he said. “There’s a joint jurisdictional working table that’s been set up with all nine Matawa Nations. We’re just working on the details of that and it will deal with issues such as road ownership, governance, permitting and land management.”

Additionally, the Ontario government remains committed to building capacity in the region, said Gravelle, citing the more than $111 million it has spent in Ring of Fire communities since 2011. “We’ve worked hard to prepare the communities for this potential development,” said Gravelle. “For example, more than 3,100 First Nations individuals have completed training programs to support employment.”

As well, in October 2017, the federal and provincial governments announced a $69.2-million investment in broadband infrastructure in the Ring of Fire region.

Not an easy road

The reaction of the Neskantaga and Eabametoong Nations to the government’s August announcement had its roots in a May 2017 letter Premier Wynne sent to the nine First Nations chiefs expressing frustration and warning she was prepared to negotiate with individual First Nations if they could not come to an agreement. A few months later, it seemed the government had done just that. Nibinamik Chief Johnny Yellowhead and Webequie Chief Cornelius Wabasse quickly held a press conference to clarify their agreement was simply to conduct a study to identify an infrastructure corridor for their communities.

CIM Magazine contacted all nine Nations multiple times for comment but did not receive a response.

“A lot of what I see the government doing right now is divide and conquer among First Nations,” said Cheryl Chetkiewicz, a scientist who leads Wildlife Conservation Society Canada’s Ontario Far North program and focuses on research and tools to support regional and community-based environmental planning in the region. “As much as I think the Premier really cares about doing the right thing and helping communities and supporting their vision for the future, too often the work with First Nations is not fast enough within the political timeframe and we end up in the same situations [as in the past].”

Related: While First Nations and territorial government negotiate, more than half of Yukon off-limits to prospectors

The transportation infrastructure, said Chetkiewicz, has positives for remote communities, including reducing the costs of food and increasing opportunities for more services, but there are also potentially negative long-term ecological and social impacts. These include safety, given the risks inherent in ore-carrying trucks sharing roads with passenger cars, the ecological impact on the fish and wildlife, and water quality, as well as issues arising from making First Nations lands accessible to non-aboriginal people. “I don’t think that there’s been thoughtful discussions or research on the effects these roads will have on First Nations communities and what that might mean for the future of the fish and wildlife, and the people,” she said.

“The [First Nations] leadership have said we’re not against any development,” said David Paul Achneepineskum, CEO of the Matawa First Nations Management. “But we need resources to prepare.”

Each community has unique challenges, many of them dire. Neskantaga, for example, has been on a boil water advisory for 22 years, as has Marten Falls since 2005. While both communities will finally be getting new water treatment plants in the next few years, it has been a long embattled journey for them to get the government to agree to these projects.

In terms of training, despite some initiatives, neither the provincial nor federal governments have developed a comprehensive plan that addresses the stark realities the communities face, said Bob Rae, advisor to the Matawa Chiefs Tribal Council on the Ring of Fire.“It’s a negotiation that is still ongoing,” he said.

The legacy of intergenerational trauma that communities face are from all accounts staggering. Residential schools, self-medicating addictions, high suicide rates, and few mental health resources have a negative impact on the abilities of the communities to come together and make decisions, said Rae.

“That’s an ongoing challenge,” he said. “I think the thing that’s hard for governments to fully appreciate is that these are communities that are in crisis and encountering some very fundamental human problems. It’s not like a negotiation with a chamber of commerce. Governments have to use even more imagination and compassion in understanding how to respond to communities facing these crises.”

Commitment to the process

The government of Ontario remains committed to maintaining “an open dialogue with First Nations in the region to ensure these communities can actively participate in the decision-making process,” said Gravelle. “We want to improve community social and economic development support, and resource-benefit sharing is also on the table for discussion.”

All the First Nations, including Webequie, Marten Falls and Nibinamik as well as Eabametoong and Neskantaga, have also reaffirmed their commitment to the Regional Framework.

“I certainly haven’t given up hope,” said Rae. “It’s a hope based on a reality that development can only happen with the support and approval of the First Nations. And there are going to have to be significant improvements to conditions on the reserves in order to allow people to be able to benefit from any development. It’s simply going to require a continued engagement and that at times can be frustrating but there’s no alternative to this.”