Sweet successThe road to production was a long one, but it was not enough to sour Harte Gold on its Sugar Zone project

The road to production was a long one, but it was not enough to sour Harte Gold on its Sugar Zone project
By Virginia Heffernan
January 07, 2019

The Sugar Zone mine is located just northeast of White River in northwestern Ontario. Courtesy of Harte Gold

From early financing to final permitting, nothing about advancing the Sugar Zone project in northern Ontario to production has been easy or expedient. So the opening of the mine in October – the province’s first high-grade gold mine in a decade – was especially poignant for Harte Gold’s management and employees.

The operation near White River is expected to produce less than 50,000 ounces in 2019 but annual production will grow to 75,000 ounces by 2020 and average 106,000 ounces from then on as throughput expands. By mid-November, mill throughput had reached the initial target of 575 tonnes per day (tpd) and Harte expected it would reach commercial production and complete the tailings management facility and paste fill plant by the end of 2018.

In 2009, Stephen G. Roman – son of the late mining legend and Denison Mines founder Stephen B. Roman – took over management of Harte and began getting the company’s financial house in order. In March of 2010, Harte was given approval to buy Corona’s 51 per cent stake in the Sugar Zone property. By early 2011, the company had enough funds to begin a 10,000-metre drilling campaign, and in May the next year, with gold surging above US$1,600 an ounce, Harte released a preliminary economic assessment for the project. It proposed a 750-tpd operation that would produce 66,000 ounces annually over six years.

Bumps in the road

But the road to production was winding and ridden with potholes. Financing to advance the project became increasingly challenging as gold descended from a 2011 high of US$1,900 per ounce and shares of Harte Gold fell in tandem. By the fall of 2015, however, Harte was able to begin a 70,000-tonne bulk sampling program at Sugar Zone, truck the sample to Barrick’s Hemlo operation 60 kilometres to the west for processing, and secure a gold loan for up to US$6 million. The activity attracted the attention of UK-based private equity firm Appian Capital.

“We really turned a corner when Appian came to visit in 2016 and liked the look of the orebody, then made a proposal to do a financing for us. That initial $25 million is what really accelerated our whole program, allowing us to do more drilling and development and attract some market attention,” said Roman, Harte’s chairman, president and CEO. “Appian liked our idea of moving the project quickly to production and didn’t worry about us completing a bankable feasibility study.”

2018 was another pivotal year for the project. Based on an aggressive exploration program in 2017, Harte tripled resources at the deposit from 500,000 ounces to 1.5 million ounces (2.6 million tonnes grading 8.52 gpt gold indicated and 3.6 million tonnes, grading 6.59 gpt gold inferred). A preliminary economic assessment (PEA) indicated Sugar Zone has a net present value of $244 million and a 42 per cent internal rate of return (post-tax) at a gold price of US$1,250 per ounce and a life-of-mine capital cost of $280 million, including $176 million for underground development. The junior also completed a debt financing package for up to US$70 million with Appian and Sprott Private Resource Lending. 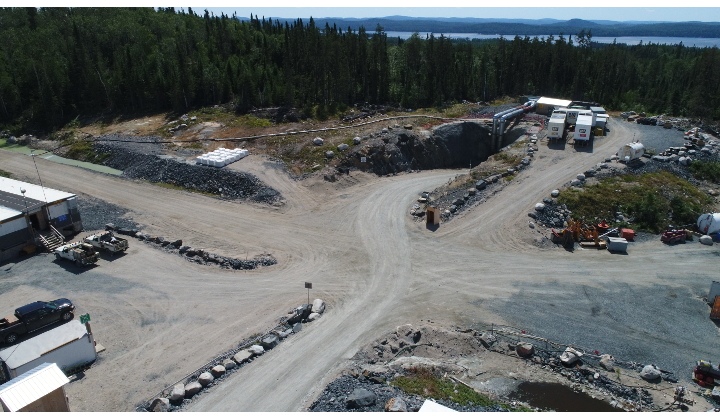 The portal to the mine. Courtesy of Harte Gold

When Harte secured its final operating permits in September 2018, the company moved quickly to achieve commercial production before year-end. Sudbury-based Technica Mining, responsible for extracting the bulk sample in 2015, had extended the underground ramp and developed the initial stopes and vent raises. Redpath Canada won the contract for commercial mining for the next two years, while Halyard built the paste plant and concentrator, including gravity recovery and flotation, to recover 90 per cent of the gold.

But getting the green light from government took years, said Roman, and required multiple permits, many of which were delayed. In the end, Harte decided to limit throughput to under 600 tpd so the company could get the mine up and running on provincial permits alone, as well as generate some cash flow before expanding the operation.

According to the PEA by P&E Mining Consultants, development will be phased starting at 540 tpd, increasing to 800 tpd in 2020 and jumping to 1,400 tpd by 2021 as resources in the nearby Middle Zone are incorporated into the mine plan. The gravity circuit allows most of the gold to be processed into doré bars on site, but the sulfide concentrates from flotation require processing elsewhere for now.

“We have to ship the concentrate to a third party (Glencore’s Horne smelter in Rouyn-Noranda, Quebec), so we want to get a (federal) permit to expand to 1,400 tpd and add a cyanide circuit,” said Roman. “But if we had tried to do that from day one, the process would have taken more than five years.” 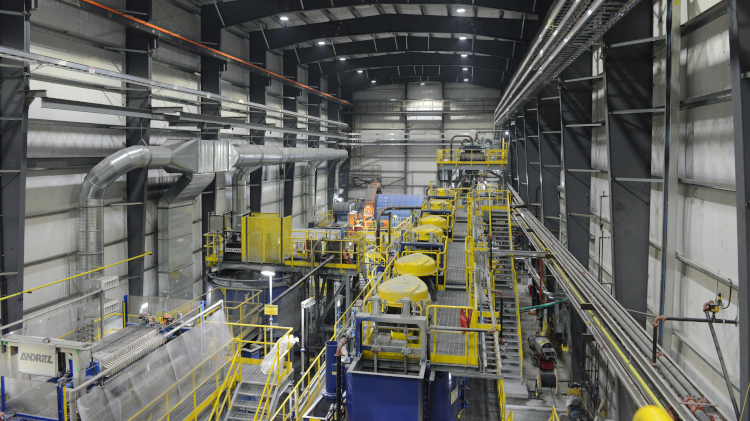 Gold that is not recovered in the gravity circuit at the mine is trucked as a concentrate for further processing at the Horne smelter in Rouyn-Noranda, Quebec. Courtesy of Harte Gold

Securing impact and benefits agreements (IBAs) with First Nations groups in the area also dragged on. “The government has opened a Pandora’s box and there are no rules for us to follow,” said Roman about the industry’s obligations to Indigenous groups. “The structure needs to be updated with some sort of guideline to reflect what companies and First Nations are trying to achieve. Put a time limit on it so that contractors and employees are not standing by.”

In May 2018 Harte signed an IBA with the Pic Mobert First Nation that provides a four per cent net profits interest as well as options to purchase 500,000 common shares of Harte at $0.40 for a period of five years. The company has a separate agreement with the Pic River Nation to provide environmental monitoring.

Sugar Zone has a mine life of 11 years and employs about 200 people from the nearby communities of White River, Hornepayne, Matheson and Wawa. The company has built temporary housing with a central kitchen in White River and buses those employees to and from the site 25 kilometres to the northeast.

Related: Monarques Gold to try a different approach at its Wasamac deposit

Harte has chosen to use longitudinal longhole retreat stoping at a total operating cost of $128 per tonne processed. The company is targeting the lower grade Sugar Zone North and South ramp stopes first before reaching the higher grade stopes below, so the average diluted grade over the first 18 months of production will be 5.5 gpt.

Sugar Zone is a mesothermal gold deposit located in a shear zone within the Dayohessarah greenstone belt. Gold is associated with silica-sulfide-potassic alteration and occurs in quartz veins and stringers predominantly associated with porphyry sills, contact zones and mafic metavolcanics.

Harte will release a new resource estimate for Sugar Zone early next year and will continue exploration to extend known zones of mineralization and look for new pockets along the 83,850-hectare land package that straddles the belt. The company has recently started drilling about 1,500 metres below surface – 500 metres below Sugar Zone’s current inferred resources – to test continuity of mineralization down dip.

Roman likens the geology of Sugar Zone to the Hemlo deposit and other deposits in the western Abitibi, where operators started mining mineralized shoots at surface before finding higher grade ore much deeper underground. “It’s expensive to drill deep holes, but we’ll see what we can do to minimize the cost by using downhole [induced polarization] and structural geology.”

Sugar Zone will provide a much-needed economic boost to northern Ontario and has the potential to expand significantly in the coming years, but its path to development required exceptional levels of perseverance. When Harte finally opened the mine on Oct. 24, 2018, Premier Doug Ford called the event a “signal to the world that Ontario is open for business,” but for Roman it is just one hard-won milestone on the road to bringing the project to its full potential.

The company plans to release an updated resource estimate in early 2019.