OceanaGold writes the latest chapter in the long history of South Carolina’s Haile mine
By Ryan Bergen
August 25, 2017 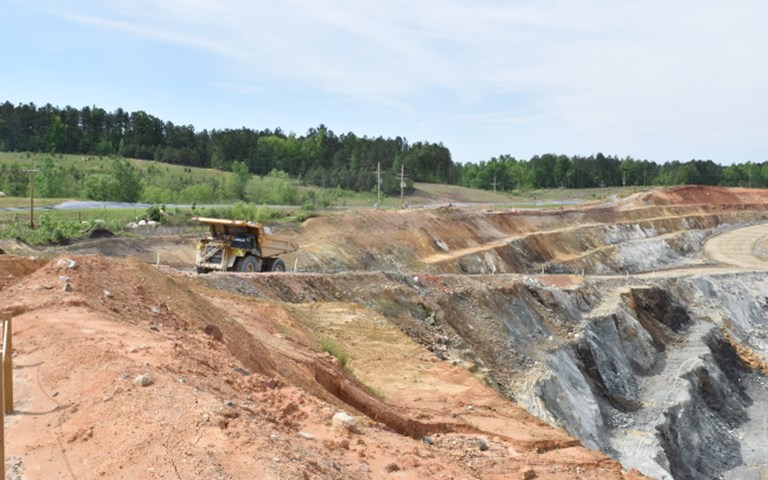 The results of the recent optimization study with a higher gold price means the size of the eight planned pits will expand. Ryan Bergen

Located a few minutes from the small town of Kershaw, South Carolina, Haile has the distinction of being the only gold mine in the United States east of the Mississippi River. More to the point, unlike many new operations it is, if traffic cooperates, just an hour and a half from both an international airport and a domestic hub for air cargo. It also has the advantage of a deep labour pool nearby and easy access to power and roads, which helped OceanaGold build the 6,300- tonnes-per-day operation for an estimated US$400 million.

Gold was first discovered in the area in the 1820s by tenants clearing the land owned by Benjamin Haile. The first placer operations evolved to include a stamp mill, and the gold extracted helped fund the losing Confederate effort in the American Civil War. Legendary Union General William Sherman made a point of destroying Haile’s mine facilities as he and his troops returned north and operations only resumed in the 1880s when New York investors brought it back into production. The mine eventually hit its stride once the German engineer Carl Adolf Thies introduced the barrel chlorination process at the operation and brought the recovery rate from the sulfide ore up to near 90 per cent, from 40. That successful run came to a tragic end with the explosion of a boiler in the stamp mill in 1908. Gold prices rose in the 1930s and Haile was briefly brought back to life before President Roosevelt ordered gold mines – considered a non-strategic resource – to be shut. The emergence of heap leaching in the 1970s gave Haile a few more years of life.

The mine’s latest incarnation began in 2007 when Romarco Minerals picked up the property and began exploration and development, securing all of the permits by November 2014. Several months later, OceanaGold, which operates two mines in New Zealand as well as Didipio in the Philippines, took its big step into North America when it acquired Romarco Minerals for $856 million. And now that OceanaGold has its foothold on American soil, its ambitions have found a home. “We want to build the best, safest and most environmentally responsible gold mine in North America,” said Mark Cadzow, executive vice-president and chief development officer for OceanaGold when CIM Magazine visited the site in late April. Cadzow took over as project lead in late 2015, with the earthworks already begun.

RELATED: Razed by Union soldiers and blown apart by its own boiler, the Haile mine has a storied past

In the long term, the OceanaGold team is making the case for itself. The company announced in late June that as part of its optimization study it had expanded the mineral reserves at Haile by 70 per cent to 3.46 million ounces, added two years to the mine life of the open pit operation and conceived an underground development called Horseshoe that would have a six-year mine life and produce an estimated 440,000 ounces. These figures are based on Proven and Probable Reserves of 55 million tonnes with a grade of 1.71 grams per tonne, and a cut-off grade of .45 g/t for the open pit and 3.12 million tonnes at 4.38 g/t at a cut-off of 1.50g/t for the underground operation. Initially, the mine plan called for the processing of three million tonnes per year over the mine’s 14-year life. That figure is now up to four million. 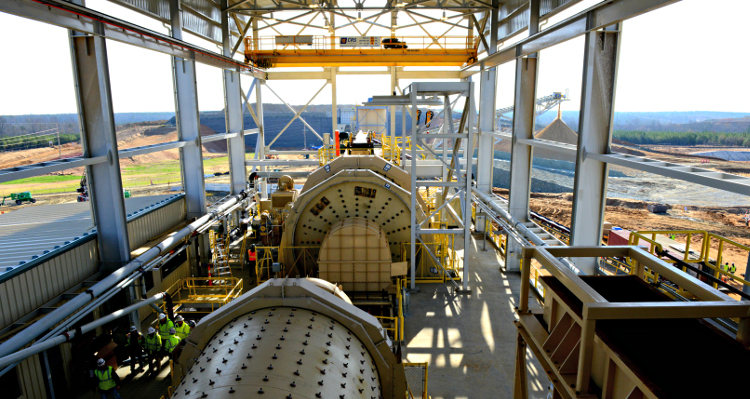 “Very shortly we will commence the permitting process and work closely with the regulator and all stakeholders to advance the Haile expansion project to construction,” said OceanaGold’s CEO Mick Wilkes in a statement accompanying the June announcement. “We continue to ramp up operations and drill targets at depth and along strike to further add to the already significant resource base. These targets include Palomino and beneath the Snake pit, both of which were not included in the study and represent potential additional value of the asset.”

On the same day, however, the company also declared that Haile has struggled to reach commercial production. The poly-urethane liners of all eight carbon-in-leach tanks delaminated and will have to be reapplied, one tank at a time so as not to disrupt production. The operations team also discovered gold-bearing slurry from the carbon-in-leach tanks was being sent to tailings after it “identified the CIL piping system was under designed.” OceanaGold also noted improvements to be made in the SAG mill and slurry feed to the fine grinding circuit, as well as to the plant’s process control system. “Although disappointed with the delay,” stated Wilkes, “I am highly confident in the team and with their ability to deliver this plant to meet our expectations for production and cost.”

The upgrade of the control system will be completed in stages and will feature a real-time monitoring system to analyze the sulfur content in the mill feed as well in the slurry further along the process circuit. “If you know how much sulfur you have in your feed then you can tailor the amount of reagents or the amount of physical material which allows you to streamline your process, saving money on reagents by not having to put in as much as you would’ve for a ‘just-in-case’ scenario.” explained Cadzow. The technology, manufactured by Sabia, relies on prompt gamma neutron activation analysis (PGNAA), which irradiates the feed and identifies its elements through the unique gamma ray that each emits. There are smelters in Sudbury nickel operations that use the same technology to analyze the sulfur in the smelter feed, but, according to Cadzow, this is the first time it will be put to use at a gold operation.

From mine to mill

The Haile deposit is part of the Carolina terrane, once known as the Carolina slate belt, which runs northeast from Alabama into Virginia. The host rock, formed 550 million years ago off the west coast of Africa, contains some of the world’s oldest epithermal deposits. Haile’s low sulfidation epithermal mineralization is one of three types of gold deposits in the terrane, which also includes a high sulfidation mineralization that kept the Brewer gold mine 10 kilometres northeast of Haile operating off and on between 1828 and 1995, and a shear-zone orogenic style, the source of gold for the Howie mine in North Carolina that shuttered in the 1940s.

Multiple generations of flooding added gold-rich sediment to the Haile deposit where now the ore body, a combination of pyrite and electrum, is contained in hard and soft rock.

Once ore is mined from a series of open pits, it is reduced to less than 15 centimetres by the primary jaw crusher before heading to the SAG then ball mills prior to flotation. Concentrate from the flash and rougher flotation is reground in six Metso stirred media detritors so that 80 per cent is 13 microns or less before it heads to the carbon-in-leach stage. The flotation tailings and the discharge from the concentrate leach tank are combined in the additional seven CIL tanks before passing through cyanide recovery thickener, with the tailings heading to a storage facility lined with sheets of high-density polyethylene. 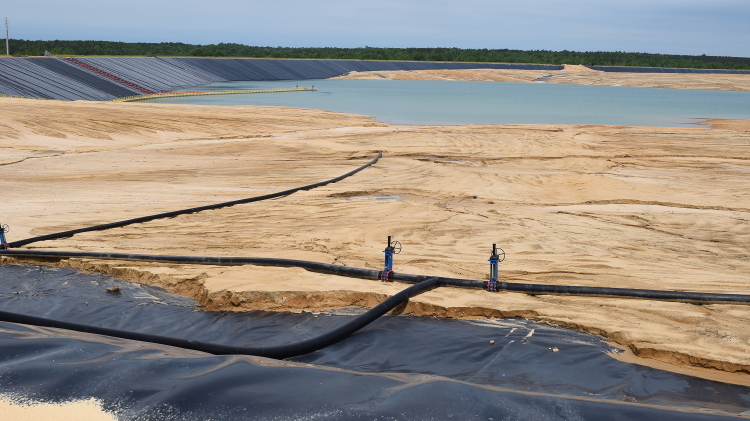 The tailings storage facility is lined with and HDPE geomembrane. An crossing was built over a local highway to ease the construction process and to transport the tailings from the process plant. Ryan Bergen

With its mining past, South Carolina has also inherited its liabilities. Two past-producing gold mines in the state are among the Environmental Protection Agency’s sites identified as areas contaminated by hazardous waste and in need of clean-up at taxpayers’ expense. Obtaining the federal wetlands permit – one of more than two dozen from federal, state and county regulators – from the U.S. Army Corps of Engineers for the mine proved a long process, due both to the scale and the regulators’ lack of experience with such a project. The permitting, which allowed for 120 acres of wetlands to be filled in, took three years and requires the preservation of wetlands through the classification and storage of the overburden with the potentially acid-generating material stored in a lined facility where the drainage is collected and treated at the site’s water treatment facility.

Up to the challenge

For his part, Cadzow, who is a veteran of several OceanaGold projects including the construction of its Macraes mine, the installation and commissioning of an autoclave there as well as the lead for the development of the mine infrastructure at Oceanagold’s Didipio operation in the Philippines, is confident in the talent working to bring Haile up to capacity. “Every ore body is different, but is the processing more technically challenging than other ore bodies we’ve got? No. We’ve run more complex ones and we’ve run less complex ones.” He did, however, concede that there was an aspect of the project that did give him pause. “I would say that I was a little bit worried about the safety culture. I think people tend to take risks without thinking about their own personal risk and potentially the risk to others. That would certainly be one of the biggest challenges here.”

That concern informed their hiring process which did not necessarily move applicants with mining experience to the front of the line. “We like to get local people who don’t have a great knowledge of mining so that we can train them the way we want them, rather than potentially have them bring bad habits with them, and our training techniques are well-proven with mines in New Zealand and the Philippines,” explained Cadzow. And, according to data from the U.S. Mine Safety and Health Administration, that approach has paid off. There have been no fatalities at the mine and the site’s lost time injury rate has been consistently better than the national average for metal mines.

Cadzow tipped his hat to the Romarco team who got the project underway. “They did it the right way, and got a lot of community engagement and the community has been very excited to see the progress.” And the change of hands has been a smooth one. “People here have been very impressed with the professionalism of Haile. We are very transparent – you can see what we’re doing, and that we are doing the right thing. It’s part of our culture.”