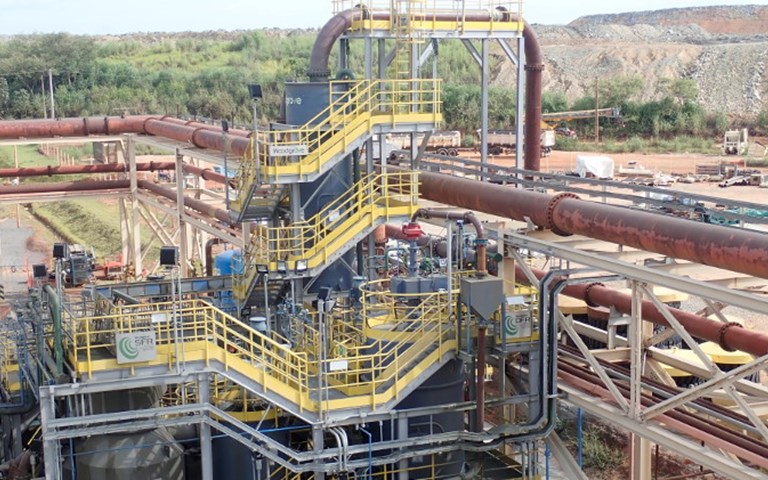 In mid-February, Woodgrove Technologies’ co-founders Glenn Dobby and Glenn Kosick (aka the Glenns) hit a new milestone: four pilot plant campaigns operating in four countries in one day. By year-end, the 2017 Canadian Mineral Processors of the Year award winners aim to have revenues in the nine digits and a staff of nearly 80, up from eight employees just two years ago.

With an eagerness to innovate that is as fervent today as when they first started to collaborate 30 years ago, Dobby and Kosick possess deep insight into the industry’s processing needs and the juggling skills required to develop technologies while simultaneously managing a rapidly growing company.

“It’s all about identifying and presenting the need in such a way that the client can recognize it, and then coming up with the financial justification for change,” said Kosick, who founded the flotation equipment and consulting firm

MinnovEX in 1988 after working as an engineer at Cominco’s Polaris lead-zinc mine in the Arctic. “You do it step by step so that risk is managed. In the end, if you can’t sell the technology, then the need is not great enough.”

Woodgrove’s breakthrough technology, the staged flotation reactor (SFR), is a case in point. As long as they have been working together (Dobby left his job as an engineering professor at the University of Toronto to join MinnovEX in 1993), the Glenns have been bothered by the limitations of flotation, such as its large footprint and inefficient particle collection. So a few years after selling MinnovEX to SGS in 2005, Dobby approached Kosick with a proposal to separate flotation’s three phases so they could iron out the bugs within each one.

Working out of a garage and with their own money, they began building a machine that optimized the phases of particle collection, bubble separation and froth recovery. The result was the SFR, a flotation cell that reduces operating costs, power consumption, and floor space by up to 50 per cent, and cuts air consumption even more.

Around the same time, Anaconda Mining needed help with its concentrator at the Pine Cove gold mine in Baie Verte, Newfoundland. Instead of merely offering advice, the Glenns bought shares in the company and took seats on the board of Anaconda so they could pilot test their SFR prototype as part of the new grinding and flotation circuit they would build on a shoestring budget. The results were encouraging, leading Woodgrove to build a full-scale SFR unit, still operating today, that provides the fourth stage of a four-cell rougher flotation plant at Pine Cove.

They went on to prove the concept on a larger scale at the Chelopech copper-gold mine in Bulgaria, where owner Dundee Precious Metals was keen to try out new technology, first testing the SFR as the second cleaner in the copper circuit, later replacing both the third and fourth cleaner sections, and finally building a greenfield circuit that recovered gold-bearing pyrite in the copper circuit tailings in 2014.

But does it scale?

Despite the company’s early successes, Woodgrove had yet to convince the majors that it could scale up SFR technology by the 100 to 200 orders of magnitude needed to tackle large mine operations.

The solution was to establish a consortium to test the technology, posing limited individual risk in exchange for potentially large rewards. During the industry downturn of 2012, Toronto-based Woodgrove convinced nine majors to join the consortium, with Vale as the lead company hosting SFR flotation cells at its Sossego copper mine in Brazil.

“We knew there was something wrong with conventional flotation as it exists and that we had the solution,” said Dobby. “And we knew we could provide a major reduction in capital and operating costs. Our timing was good because costs were going through the roof and projects were being shut down as a result. The industry knew it had to do better.”

While the SFR plant at Sossego was proving its worth, the Glenns built a portable pilot plant they could take to other mine sites as a metallurgical evaluation tool against existing operations. It was not all smooth sailing – they almost failed at BHP’s Spence copper project in Chile’s Atacama Desert until they experimented with turning the washwater on in the roughing circuits to disperse the clays interfering with flotation – but they eventually succeeded in proving up the technology on a large commercial scale.

Related: Buoyed by pressure to cut costs and improve recovery, new flotation technologies are on the rise

“BHP shook us by the ankles with their due diligence,” said Kosick. “But we ended up meeting their expectations in metallurgical performance and that had a huge impact on our company.” By the fall of 2017, Woodgrove had signed a contract to supply 78 SFR cells to Spence as part of BHP’s US$2.5-billion expansion that will extend the mine’s life by 20 years.

Kosick and Dobby said they believe establishing the consortium was key to their success; it spread out the risk of testing a new technology, allowed SFR to reach large-scale commercial status in a single year instead of five or ten years, and provided some reassurance to process engineers at geographically diverse mining operations who had the opportunity to collaborate and share their findings during the test phase.

In 2016, Woodgrove merged with Portage Technologies – run by former MinnovEX colleague Michael Schaffer – to provide advanced process control for flotation circuits, as well as all other unit operations of mineral processing. The merger allowed Woodgrove to provide a complete flotation package from design to commissioning and control from its offices in Canada, Brazil, Chile, Mexico, and South Africa.

But as successful and widely adopted as SFR technology has become, the Glenns say what they are working on now – “direct flotation” – could be another step change. They contend the innovation will revolutionize the industry by removing the chemically complex froth layer – where the bubbles attached to the valuable particles often burst and lose their payload – from the flowsheet. Woodgrove is piloting the technology and has already built its first commercial unit in Brazil.

“We are capturing the bubbles before they become froth,” said Dobby. “We believe the flotation plant of the future will look more like a chemical processing plant and the atmosphere will be better because there will be fewer off-gases.”

Woodgrove has taken on the global flotation sector and is still very much on its feet, thanks in large part to the drive and dedication of its co-founders. For Kosick, he said the necessary perseverance that has allowed him to develop innovative technology solutions today was cultivated early in his career at Polaris, where a 10-week-on/two-week-off rotation with 12-hour days tested the limits of even the toughest miners. “There are some people out there who are resistant to change, so you just have to put your head down and push through the barriers.”