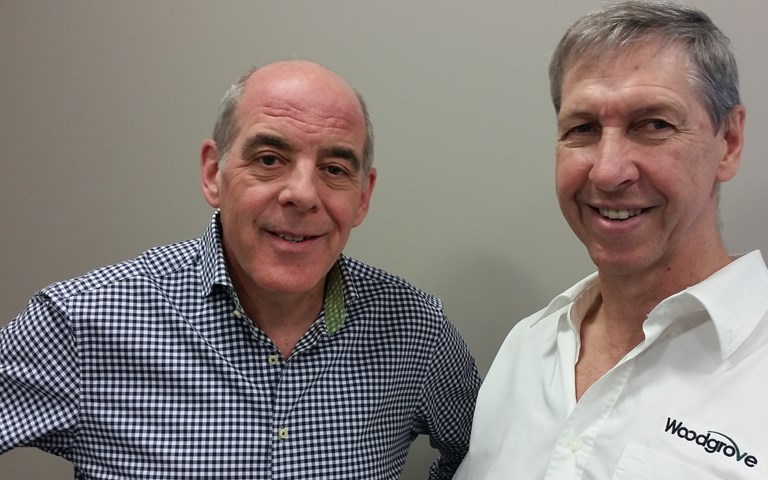 “When you develop technology of this magnitude to displace existing technology in a very mature industry, it’s not really for the faint of heart,” said Glenn Kosick of Woodgrove Technologies. Kosick and his partner Glenn Dobby launched Woodgrove in 2009 to develop and promote their Staged Flotation Reactor (SFR), a new approach to flotation equipment for the mineral processing industry. The two have been developing innovative technology together for nearly 30 years.

SFR is their response to the challenge of processing for increasingly large-tonnage operations. “The trend has been to just build bigger and bigger, to the point where today [flotation equipment suppliers] are making 600-cubic-metre tank cells to try and reduce infrastructure and costs; but it’s not nearly enough,” said Dobby. The two saw an opportunity to deal with the large inefficiency that occurs when moving from the laboratory to full-scale operation. SFR separates the stages of the flotation process into its three core components: particle collection, phase separation and froth-recovery. The new technology results in around 50 per cent savings on operating costs, floor space and energy consumption, along with lower installation and maintenance costs. “It really is a paradigm shift in flotation,” said Dobby.

Their first full-scale installation was at Anaconda Mining’s Pine Cove gold mine in Newfoundland in 2010, followed by three projects with Dundee Precious Metals at their Chelopech mine in Bulgaria, for both copper and pyrite recovery.

Concurrent with the Dundee projects, Woodgrove assembled a consortium of nine major copper producers for a large-scale demonstration plant in Brazil, hosted by Vale at its Sossego mine. That testing, which finished up in March 2015, was such a success that Vale immediately installed four SFR units at Sossego’s sister copper plant at Salobo.

“We’re at the point now where we’re getting so much awareness and contact from engineering companies and projects around the world that we haven’t even been actively marketing,” said Dobby. “It’s now coming to us.”