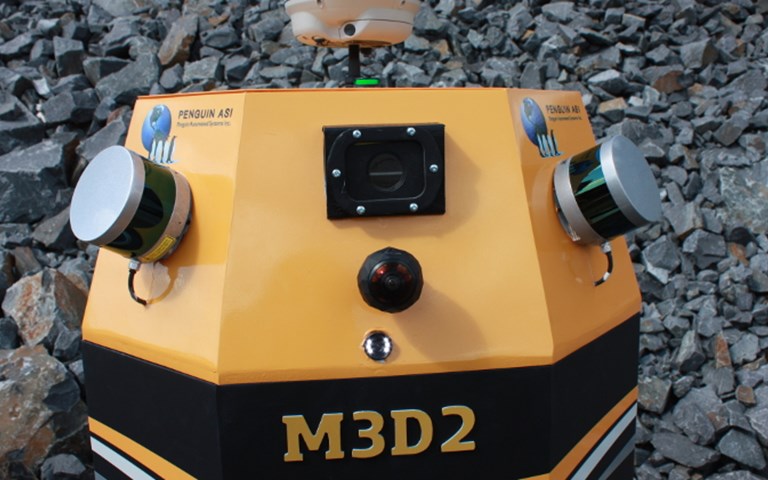 Automated equipment designed for mining applications is being built to take on a range of tasks above and below the ground, from automated haul trucks and trains to robotic drills. These technologies can increase efficiency and save money, and they also offer enormous safety benefits. In an underground mine, robots can remove humans from hazardous situations altogether, where falling rock, blasting and poor air quality are all common risks. But before robotic underground miners become an everyday occurrence, some challenges involving navigation and communication need to be overcome.

Greg Baiden, chairman and chief technical officer of Penguin ASI, has been developing robot technologies for mining for over 30 years. Baiden joined nickel mining giant Inco Limited in Sudbury, Ontario, in 1986 as a young engineer responsible for managing the introduction of automated driverless truck technology on site. In this role, he saw the need for telecommunications systems and began to work on computer networking systems to automate mining equipment.

“I noticed there was no way to do underground positioning automatically, like you would on the surface or in an airplane. So, we began to focus on telecommunications systems and GPS [Global Positioning Systems],” said Baiden, who went on to build a factory-scale communications system for robotics during his PhD at McGill University in the early 1990s.

“At the time, broadband technology was just coming out of research labs. Nobody knew what broadband meant, or what networks were,” said Baiden. “When we started installing broadband, I pointed out that if we build the right network, a control center computer on the surface can be linked to a wireless radio onboard a machine underground and thus, you have a robot.”

Adapting to the underground

Unlike their above-ground counterparts, which use GPS satellites and Wi-Fi to position themselves, underground robots must calculate their position within solid rock, without access to these communications. Just as an aeroplane needs to know which way is north and where the wings are pointed as it moves forward through the sky, a robot digging a tunnel underground needs to know its velocity, direction, location and which way its ‘limbs’ are angled, particularly any drilling arms or limbs designed to place explosives.

Baiden created the Mapping 3D Droid (M3D2), a geospatial mapping system, in 2008. M3D2 uses a position location and navigation system adapted by Baiden and his team from current United States military tank technology. The technology’s first purpose was to direct weapons on tanks when the GPS would jam, but Baiden adapted the technology to solve surveying and positioning problems underground.

Related: Drone manufacturers are confident that demand will soon explode for their cost-effective eyes in the sky

“We figured out not just the location of the robot itself, but which way it is facing, how far it can reach, how far away the rock is, and all those aspects of the environment needed to tunnel through the solid rock in front of it,” said Baiden. “M3D2 can map an entire mine and create a 3D game space, similar to a PS4 game.”

A solid foundation for multiple applications

M3D2 was first tested underground in Onaping, Ontario, in 2010. Based on the promising results of those trials, Chilean copper giant Codelco asked Penguin ASI to develop a solution for removing hang-ups, the rock blockages in tunnels that are hazardous and potentially fatal when they fall. Baiden and the team at Penguin ASI installed M3D2’s positioning technology in a new robot, the Hang-Up Assessment and Removal Telerobotic System. Using laser scanners and the adapted military technology, this robotic vehicle drives autonomously to the location of the hang-up, where a remote operator directs a robotic arm precisely into the blockage of rock overhead, drills a hole and loads explosives to clear the blockage.

“The robot surveys the area using laser scanners, and then uses the military technology that we worked on, and continue to work on, to position the unit as if you have a GPS,” said Baiden.

More recently, the M3D2 technology was deployed by the Minnesota-based potash producer The Mosiac Company. At the recommendation of a colleague familiar with Penguin ASI’s technology and applications, Monica Tochor, senior production geologist at The Mosaic Company’s K3 potash mining operations in Saskatchewan, connected with Baiden in 2013 to discuss deploying the technology at a Mosaic project. 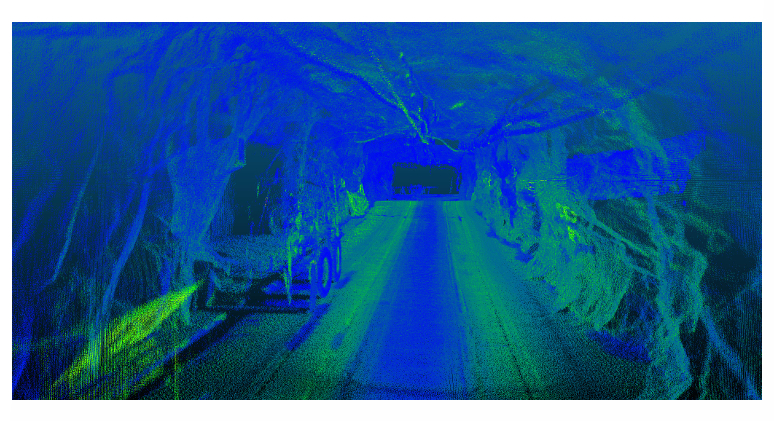 A laser scan of an underground environment created by the surveying robot (above) can be used for the positioning and navigation of autonomous equipment. Courtesy of Penguin ASI

“We agreed to collaborate and test the M3D2 in a slightly different application to see if we could remotely evaluate vertical mine shafts,” said Tochor. “The first deployment was completed at our Carlsbad facility [in New Mexico] in 2015.”

Mosaic was looking to collect spatial data representative of the conditions in a ventilation shaft, which is critical to the operation but difficult to assess since access is limited due to physical restriction and time constraints. Tochor said she believes that the development of autonomous systems will increase data reliability and evolve the workforce by removing people from the least favorable environments.

“Current standards require manual inspections be completed at a specific rate of frequency, but a person can only see what they can see,” said Tochor. “Access, lighting and complacency are limiting factors in a current inspection process. By developing and implementing complementary technology, the data collection process becomes more complete and lends itself to thorough review by making inspections safe and repeatable.”

Baiden has also joined forces with Phil Keele, president and CEO of Braveheart Resources Inc., and a colleague from Queens University to field-test another robot from the Penguin ASI stable. RoboMiner is a patent-pending robotic system that combines artificial intelligence techniques with Penguin’s positioning technologies to enable the mining of narrow-veined ore bodies using tele-autonomous grade control. The system uses a vein-following technique called shrinkage stoping, which is ideal for narrow, steeply dipping ore bodies.

“Shrinkage mining is an older mining method that was done strictly by hand with a jackleg drill,” said Baiden. “Shrinkage mining has been all but outlawed because of how dangerous it is.” However, use of the RoboMiner enables high stoping rates and unprecedented safety by removing the miner from the active mining area.

Keele partnered with Baiden to submit the project to Disrupt Mining 2018 because he is interested in using Penguin ASI technology at Braveheart’s Alpine project, a past-producing gold mine near Nelson in southeastern British Columbia. Alpine’s underground operations produced about 11,500 ounces of gold between 1938 and 1948, along with silver, lead and zinc, recovered from quartz veins just one to 1.5 metres thick. Although the project was not short-listed for the competition, Keele said he still sees Alpine as a natural proving ground for the RoboMiner.

“There is probably a substantial number of small, narrow, thin veins of high-grade metallurgy that have not been mined just because they are too narrow,” said Keele. “It’s a whole new perspective on those ore bodies that have been left behind.”

Keele acknowledges the productivity benefits of robotic mining that eliminate the time lost during production due to meal breaks, shift changes and shutting down the machine between shifts. Alpine has not yet restarted operations. Braveheart announced an updated resource estimate in January 2018. However, Keele said he hopes to use M3D2 to safely explore and map the collapsed tunnels and adits on the property from the old mine workings in 2018, and start to test RoboMiner on the property in 2019.

“Safety is paramount,” said Keele. “You either remove the hazard or remove the person from the hazard and robotics allows you to do that for a significant improvement in safety.”