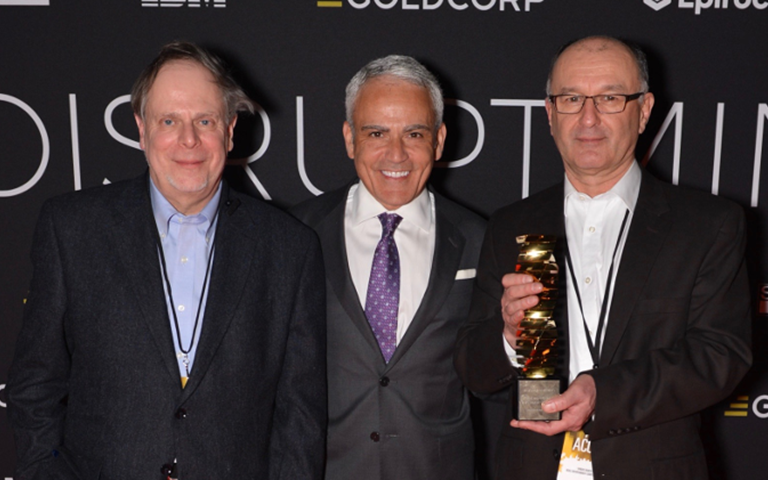 Acoustic Zoom was named the winner of Disrupt Mining on Sunday night, coming away with a $1 million investment from competition founder Goldcorp.

The goal of the technology is to make mineral exploration simpler. “If you do this with every drill hole, this tells you what the true geology character is, and where you should be drilling to infill,” he said. The company has done a couple of pilot projects, including one with Marathon Gold.

Guigné said the technology was necessary because traditional seismic practices are expensive and have typically not been picked up by the mining sector, and drilling provides a small sample but “doesn’t have spatial or lateral information.”

Acoustic Zoom was among four finalists who took part in the live “Shark Tank-style” finale at the Rebel Entertainment Complex during the annual PDAC convention.

Related: Handheld and on-site geochemistry and mineral analysis tools are evolving to be faster, more precise and more connected than ever before

LlamaZoo Interactive, also from B.C., pitched its MineLife VR software, which visualized mine development in 3D, from resource management to mine planning and reclamation. The software is currently being used by Teck Resources at one of its sites.

Open Mineral AG, from Switzerland, created an online platform for buying and selling concentrates, eliminating the need for a “middle man.”

Early on in the evening Acoustic Zoom emerged as the clear favourite. During the five-minute question-and-answer session, Salamis asked Guigné and Acoustic Zoom vice-president of marketing Gary Dinn if they would test out the technology on Integra’s DeLamar mine in Idaho.

While Acoustic Zoom walked away with the big prize, White told CIM Magazine that Goldcorp may work with other finalists in the future. This was the case last year: while Roy Slack of Cementation claimed $650,000 for his presentation of an injection hoisting system, ultimately it was Kore Geosystems, one of the semi-finalists, who inked a $1-million deal with Goldcorp to further develop its solution that combine real-time monitoring and data analytics to support mineral exploration and production.

Goldcorp also became a shareholder in Tradewind Markets, another 2017 finalist, which used blockchain technology to modernize the experience of trading and owning physical gold bullion.