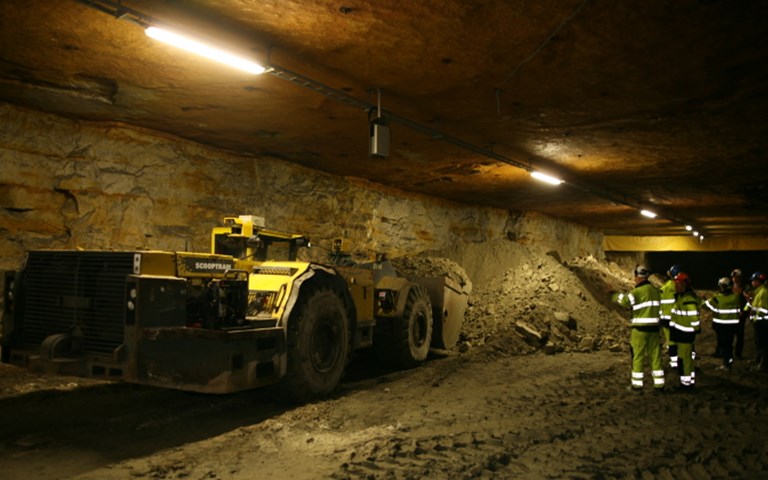 Load-haul-dump (LHD) machines today are capable of performing two of their eponymous functions autonomously. But until now, no one has figured out a system for LHDs to effectively and consistently load without human direction. The primary reason for this is frustratingly simple: with every dig to load a bucket, the rock pile moves and changes. And in dark and dusty underground conditions where it is difficult to employ video cameras, autonomous loading is particularly challenging.

“Digging is something that uses a lot of human judgment,” said Joshua Marshall, an associate professor with Queen’s University’s Mining Systems Laboratory. “Trying to get a machine to do something a human does very well is hard.”

For years, researchers have looked for solutions, with most taking a traditional intelligence approach. In essence, they collected data to try to replicate human judgement and train the machine to load. “For example, you can have an operator dig a whole bunch of times and try to use fancy learning networks to teach the machine to dig well,” said Marshall, “but at the end of the day no one came up with a system that was commercially viable.”

In early 2017, Atlas Copco plans to launch a new loading system for underground LHDs. The technology originated from a research project by Andrew Dobson – a post-graduate student at Queen’s University at the time – based on a 2008 research paper by Marshall, his advisor.

“When you’re controlling a digging robot on the Moon from the Earth, the time it takes your commands to reach the robot are just too long to dig effectively,” said Dobson, who now works for Clearpath Robotics. “So if you can automate the high frequency commands necessary for digging, you can dig on other planets more effectively and dig on Earth more efficiently.”

The new system is based on Marshall’s radical new approach to autonomous loading using admittance control, which “views the problem in a reverse way to how most robotics people have thought about it,” said Marshall. “Admittance control views robotic loading from the perspective that we have to modulate the admittance – the force/velocity relationship between the loader and the muck pile.”

Rather than try to replicate complex human intelligence, Marshall’s solution empowers the machine working in a dark, dusty environment with another human quality. “It’s very tactile, kind of like you trying to use a spoon to dig through a jar of Smarties with your eyes closed and you have to feel your way in with your hand,” said Marshall. “That is what we do. The feeling is done by the existing sensors in the machine’s hydraulic cylinders. As the bucket moves in, forces push on it and the pressures change on the cylinders and we use those pressure signals to tell us about the level of bucket/rock interaction.”

In 2012, with the help of Clearpath Robotics, the team at Queen’s retrofitted a Kubota R520S one-tonne loader to enable automation and added its new software solution. They brought in a pile of rocks to the university’s Mining Systems Laboratory, where they conducted successful field studies. It was around that time that Marshall bumped into someone from Atlas Copco at a conference and told them about the project.

From the university lab to commercialization

Atlas Copco sent Ola Pettersson, the company’s group manager for LHD applications based in Sweden, to Kingston, Ontario, to see what all the excitement was about. He was impressed with Marshall and the project.

“When I got home, I said we must have a research project together with these guys,” said Pettersson. In late 2013, Dobson travelled to Sweden to work with Atlas Copco on adjusting the code for a full-scale 14-tonne Atlas Copco ST14 LHD. Marshall followed a short while later to help with fine-tuning. Within a few months, the research project was completed and Atlas Copco acquired the intellectual property from Queen’s University.

With the software to build an LHD machine that could finally haul, dump and load autonomously, Atlas Copco began discussing commercialization – and that is when the project hit a common glitch in mining: resistance to change. “When you look at the business case, it seems that very few totally autonomous machines are sold,” said Pettersson. “It is often difficult to convince clients to go for autonomous equipment. So we actually tweaked the project and decided a better path for us was to do something different and make it a load-assist function that can be added to any loader. We think this would be especially good when you run your loader with a radio remote controller.”

Today, for safety, operators in an underground mine using LHDs have to fill the buckets remotely, often without a good view of what they are doing. “Our load-assist function for manual machines being remotely operated can help you fill the bucket efficiently and safely autonomously, and then you can run the machine manually,” said Pettersson. “As long as you have your hand on the joystick and [command it to dig], then it digs autonomously. As soon as you drop your hand off the joystick, it stops digging. That’s why we call it load-assist. You never give authority to the system. We don’t need to add any new sensors or a safety system because it’s basically the same as remote.”

In addition to a consistently good auto-dig, the Atlas Copco system, which will be available as a software upgrade for all of the company’s LHDs, will include the capability to collect data on each dig so operators can compare the difference between manual and autonomous digging. “I think they need facts before they buy into fully autonomous machines. This is what we have seen with autonomous surface drills as well,” said Pettersson. “When they have the data, they are pretty quick to jump into business and say, ‘Yeah we want this and we want it now.’ But it takes time to convince them.”