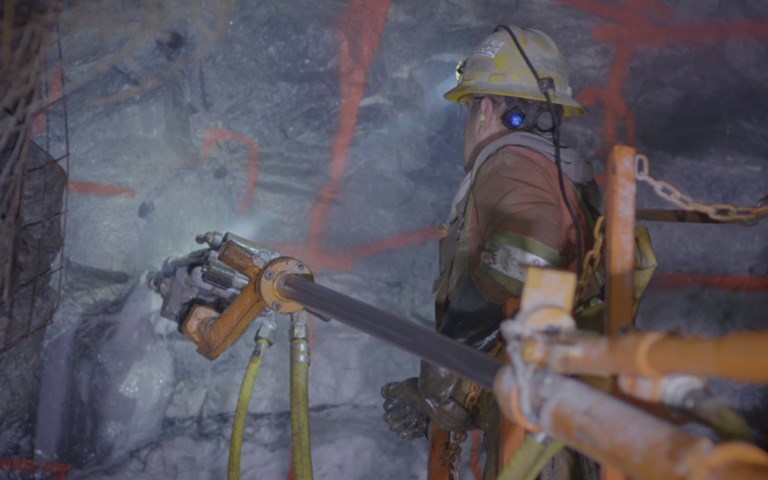 An operator drills off the first round from the SAMS platform. Courtesy of Minrail

While miners have used the room and pillar method for deposits from level to 15-degree slopes, or the cut and fill and longhole stoping methods for those within 45 and 90 degrees, mining dips that fall within the 15 and 45 degree window have traditionally been tough, dangerous and often prohibitively expensive. That’s where Minrail Inc.’s CEO Marc Beauvais feels the company could fill a void.

Minrail’s technology – known as a shallow-angle mining system or SAMS – hangs from the ceiling. And while its productivity is yet to be measured, its founder says it represents a major step forward for underground mining.

“It’s an integrated system that allows you to undertake every phase of the mining cycle related to ore extraction in a given stope,” explained Beauvais. The system – which is suspended from the roof of a draise (part drift, part raise) – will increase safety and cut down on capital expenditure costs in a major way.

Jean-Marc Lacoste, president and CEO of Monarques Gold, said he feels that the technology could allow companies like his to reopen mines that currently do not make economic sense. “It would allow us to go after lower grade, shallow angle deposits that were uneconomical to mine before,” he explained.

The system could also be good for other Monarques properties like its Croinor gold property in Val d’Or, Quebec, an advanced gold project that is currently at the prefeasibility stage, Lacoste said.

At its Beaufor mine, Monarques has given Minrail the task of extracting 1,000 tonnes from a test stope to fine tune its system and measure its efficacy. “We basically said ‘go and have fun there. Whatever you bring out, we’ll bring to the mill,’” Lacoste said. “They need to figure out all the glitches. But the system is safe, and they like what they are seeing.”

Monarques does not have a financial stake in Minrail. But as Minrail moves to commercialization, Lacoste said his company is hoping to gain one. “With the right financial backing and the right momentum this could be a big thing,” Lacoste said.

After a niche and draise are excavated using conventional methods, workers begin installation of the system.

Made up of a series of modular units – an energy block, a pneumatic drill for development, a longhole drill for production, a turret, a platform and a scraper/excavator – SAMS is designed to carry out the various tasks of the mining cycle. The units are suspended from a rail system that is bolted to the ceiling. Drill operators stand on a platform and use a remote control system to operate the drill, which is directly in front of them.

After the ore body is drilled, explosives are placed. The blasted material is brought down to the sill drift using the excavator module in combination with a slusher. For stopes that are 3.5 metres high or less, a single drum slusher unit will suffice to pull the material down. A double drum unit and transfer and guiding pulleys are required for higher stopes.

In early January, the Canada Centre for Mineral and Energy Technology (CANMET) released an audit of phase one testing of the system, which looked at the logistics of setting it up. During testing, it took a three-person team 20 hours to install the bearing rails and main module, but the company says that with experience workers will be able to set it up in 10 hours or less and that the technology will facilitate efficient work cycles.

Over the lifetime of a system – which Beauvais said will be around five years – it will be able to help miners save on capex. Beauvais said a narrow vein (1.2 to 1.5 metres) will cost around $40 or $50 per tonne to mine using the technology, while larger ones (five to six metres) will cost between $16 and $20. “With other mining techniques, we’re talking about $80 to $120 per tonne. That’s the difference,” said Beauvais.

Because the system hangs from the roof, workers can stand on a platform, allowing them to inspect both the roof and ground for danger. “If you’re hanging on the roof you’re always in a position to judge the rock positions,” explained Beauvais. “You’re seeing the roof with your own eyes — at any moment you can assess the rock conditions, to see if there is any loose rock, or if you have to repair something,” he said.

How it came to be

The made-in-Quebec system has a long history and many iterations. In the 1980s, Richmont Mines, with the assistance of the Centre de recherche industrielle du Québec (CRIQ), developed the first underground mining system to use a platform. Situated on the ground rather than the ceiling, it proved difficult to move and was eventually shelved.

In the ‘90s the Société de recherche et développement minier (SOREDEM) and the CRIQ developed a second version that would hang from a monorail system. The system was tested at the Sigma mine in Val d’Or. But after around 57 hours of use, it was shelved because the telescopic boom was too slow. Engineers, however, did note that using a horizontal system offered big advantages, as it increased safety and allowed for better bolting work.

A mining engineer, Beauvais decided to revive the project, as he feels it holds tremendous potential. He went about acquiring the relevant patents and founded Minrail Inc. in 2012.

CANMET tested the Minrail system over the course of 11 weeks last year. According to the miners who used it, the technology offers safety advantages. The miners also said using the technology was less exhausting than other forms of mining and the equipment was reliable. But they did note some negatives, like drilling problems with the long-tom, that the platform was too small for two people, and that the winches used to hoist the rails were too slow. Beauvais said those concerns have been addressed in an updated design of the SAMS.

Marc-André Lavergne, vice-president and chief operation officer Monarques Gold Corp., said that while he sees promise in the system, he wants to see its productivity tested. “It’s safer for the worker, and we hope that it will be more productive than how we mine now,” he said.