The latest hardware and software for ground condition monitoring
By Cecilia Keating
September 25, 2018 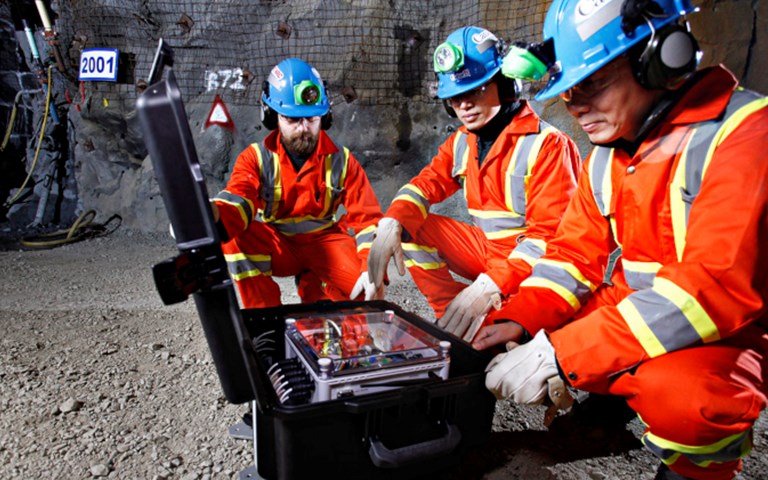 A suite of technologies – including real-time data collection from sensor-equipped rock bolts, shown above – are making ground condition and support monitoring simpler and more effective. Courtesy of National Research Council of Canada

Since the 1950s, scientists have been working to demystify the complex field of rock mechanics (the science of rock stress and how it is impacted by micro seismic events and mine activity). Over the past couple years, advances in machine learning and improvements in sensor and scanning equipment have driven the emergence of new forms of ground monitoring technologies.

The development of long-term hazard monitoring systems is critical as mine companies turn to deeper deposits, said Mira Geoscience president John McGaughey, because “with increased depth comes increased rock stress.” He added that while some pillars of ground control, such as mine design and support design, are “reasonably well understood,” hazard monitoring is “an area that is crying out for innovation.”

In late 2017, Mira released Geoscience Integrator, a data management software that computes the risk of a future ground control incident, such as a rock burst, by pulling together and holistically analyzing disparate data sets and variables already being collected on a site. These include rock mass quality, mine infrastructure and design, and geological and seismic data.

Typically, explained McGaughey, ground control engineers rely on “one or two data streams ­–predominately microseismic data and stress models in rock-bursting mines” – forsaking quantitative integration with other variables like geological structure and the particularities of the rock they are mining. Important data streams are often isolated within different departments in the mine operation or divided up between separate databases and software systems.

Geoscience Integrator remedies this disconnect. In order to be able to accurately assess the risk of  future hazard occurrences, it measures a “couple of dozen” data types and variables – some of which evolve with time, some not – continually in order to create a near real-time hazard risk assessment.

Each data set crunched by the software is initially weighted and analyzed using a “knowledge-driven” formula – one that combines the expertise of mine staff with expertise gained through decades of industry research into how different criteria relate to ground hazards.­ Once more data is collected at a particular site (especially after the occurrence of rock bursts or other hazards), the mathematical model will become more sophisticated, using “data driven” machine learning algorithms. Depending on the mine operators’ preference, the software will generate daily, weekly or monthly reports.

The software was borne out of a 10-year, $6.7-million multi-discipline, multi-institution research project called Smart Underground Monitoring Integrating Technologies (SUMIT), which aimed to prevent and reduce the hazards of rock bursts in Canadian hard rock mines. The group was led by the Centre for Excellence and Mining Innovation (CEMI), which partly funded Geoscience Integrator through four separate projects, starting with SUMIT and continuing under the Ultra-Deep Mining Network (UDMN) umbrella. The software has since been deployed successfully in two operations – a Russian phosphate operation with three mines and a miner in Western Canada that is also initially deploying at three mines. Proofs of concept have been completed in half a dozen other mines around the world.

“People have struggled long and hard to combine these data sets in a quantitative way. Now we’ve shown it can be done,” said McGaughey. “Over the next decade, any mine that has a serious geotechnical hazard problem will want a system like the one we have developed.”

“When rock fails, it doesn’t just fall or burst. It tends to let go slowly at first, making tiny precursor movements. The rocks slowly deform, before accelerating until they either burst or fall out of the ceiling or off the pillar wall,” explained Norbert Maerz, geological engineering professor and director of the Rock Mechanics and Explosives Research Center at Missouri University of Science and Technology (Missouri S&T).

Light detection and ranging (LIDAR) is a tried-and-true technology borrowed from the surveying industry that delivers highly accurate measurements of rock displacement by measuring the time it takes for a laser beam emitted from a scanner to bounce off the wall and back and comparing that with previous readings. While precise, this approach is not cost-effective for mines – a medium-range LIDAR laser scanner can cost anywhere between $40,000 and $500,000 and can monitor only one area of the rock surface at a time. They are manually operated, so a miner must physically lug the scanner to a different location in the mine if a new area needs to be investigated.

But thanks to a new class of inexpensive LIDAR scanners, Maerz and his colleagues at the Center have, with support from the National Institute for Occupational Safety and Health, successfully created a prototype for a low-cost hazard detection network that can pick up on rock displacement as low as 0.3 millimetres. 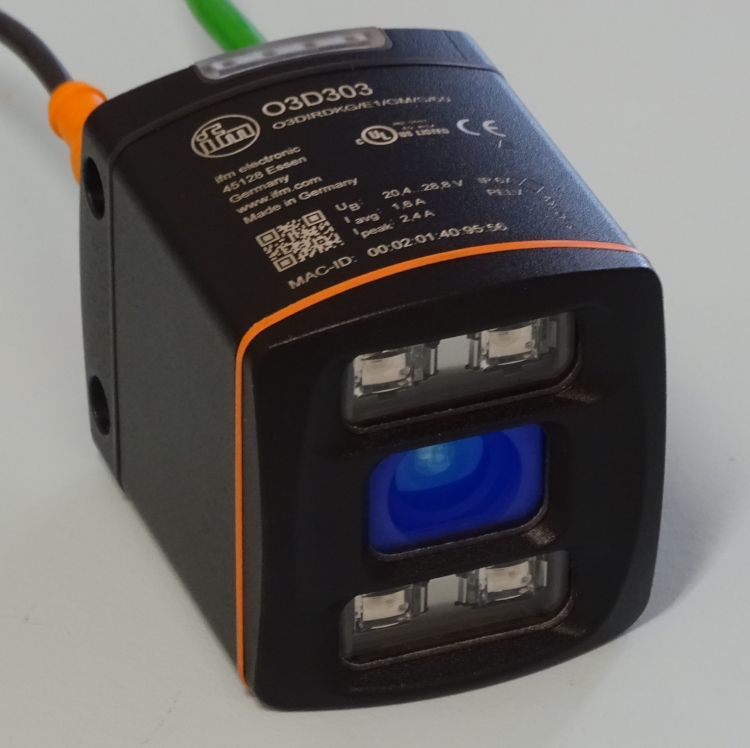 The system uses a network of mesh radios honeycombed throughout the mine to transmit data received from the low-cost LIDAR scanners to the surface. The system is completely automated, with each scanner fixed in place and “measuring more or less continuously,” explained Maerz.

The scanners are cheap, so miners can invest in many and dot them across at-risk areas. “You can get 75 to 300 inexpensive scanners, depending on model, for the price of a moderately priced surveying scanner,” said Maerz.

The Xbee radios, used to transmit the data, cost about US$46, and their batteries last roughly 180 days before needing a replacement. One dead radio does not debilitate the whole system ­­– “as long as the radios are spread out in the mine, they will find their own pathway to get the signal to where it needs to go. If one breaks or runs out of battery, the network will reroute itself to get that signal out,” said Maerz.

The prototype is being tested in two Missouri mines this summer and the Missouri S&T researchers will be able to monitor the results remotely. For one mine, they will do this by logging into the mine’s computer network, and at the other, the signal will be transmitted to a cellular modem at the surface.

Engineering consulting firm RESPEC has been developing applications for video monitoring technology in underground mines for years by repurposing a video measurement tool called Video Gauge that was initially designed by U.K. firm Imetrum for the monitoring of bridges. Having successfully applied the technology to monitor the stability of underground mine equipment like conveyors and to measure the deflection of underground structures like bridges, the company is now working to incorporate the technology into a long-term ground hazard warning system to predict areas susceptible to roof falls. 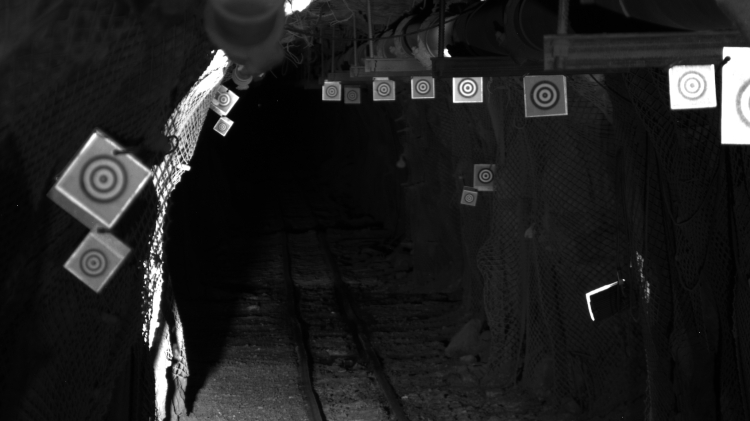 Amy DiRienzo, a RESPEC engineer based in South Dakota, said Video Gauge is “cheaper and easier” than other ground control monitoring systems. “It’s a way to make a lot more measurements than conventional instrumentation like extensometers. It is also a lot less obtrusive.”

Dust- and moisture-resistant cameras, each one around the size of a pack of cards, are permanently bolted in a stable position across from each LED-illuminated surface that needs to be monitored for displacement. The cameras are set on a timer, and measurements are taken at pre-determined intervals and sent in to the camera controller via ethernet cables laced throughout the mine. The data is then processed in real time by the Video Gauge software, which correlates the sequential digital images it receives to calculate displacement. An alert is sent if the software detects displacement beyond the threshold set by the mine. The system can detect movement as small as 0.1 mm from 100 metres away.

The software focuses on regions in the video image, or “target positions,” instead of the whole picture, meaning despite the cameras being low-resolution, the technology can make high-resolution measurements. This also means that the images can be processed quickly. The data are stored in the cloud and can be accessed through a website.

If one of the defined targets measures high displacement, new targets can be added remotely, provided that they are in the camera’s sightline, and the recorded video can be post-processed to focus on those new targets. This “keeps the long-term data set manageable and saves on set up time, but still provides the ability for specific monitoring of precursor movements,” said DiRienzo.

The technology is currently being tested at the Sanford Underground Research Facility and at a potash mine in New Mexico.

While RESPEC and Missouri S&T’s efforts are focused on measuring displacement on the rock surface, the National Research Council of Canada’s (NRC) new rock bolt monitoring technology sheds light on what is happening in layers of rock beneath the surface.

The group has developed a new range of instrumented rock bolts equipped with ultrasonic sensors it has dubbed RBS, and is currently testing them at Agnico Eagle’s LaRonde mine in Quebec. The sensors measure the total stress load and condition of the bolt. In addition, they can also determine which sections of the six- to 10-foot bolt are under stress. This allows ground control engineers to know when and where the bolts have deformed or broken without having to manually pull them out to check. While the sensors do not take direct measurements of the rock, monitoring the stress load on the rock bolt in its different sections provides an interesting snapshot of rock activity beneath the surface.

“When blasts or microseismic events happen, we can now see how far, fast and extensive the change in the rock is and where these changes occur. You can get immediate feedback of local conditions using the signal coming from the sensor,” explained Yves Quenneville, lead business development officer for the project.

For the rock bolt sensors to be able to give a good picture of rock movements, quantity is key ­– which is why the NRC plans to ensure that the finished product will be marketed with a price below $100. “The point of the technology is not to have only a few sensors. Once you deploy dozens or hundreds of these bolts with sensors, you start to have a more complete view of what is going on throughout the mine,” Quenneville said.

The test run at LaRonde this summer has proven that, as hoped, data can be collected manually, using a telescopic perch, and remotely, using a real-time multichannel recorder that collects data from up to 16 sensors and sends the information to the surface via Wi-Fi or LTE. Both recording systems allow data to be downloaded, viewed and integrated with other rock surface monitoring instruments such as LIDAR and video monitoring.

The NRC is currently talking to potential partners to see how it can integrate the data from its rock bolt sensors with other ground control monitoring data sets. “There’s a lot of interest in correlating what is going on inside the rock and what is happening on the surface, or in relation to microseismic events. Of course, there’s a lot of factors at play, so the association of this complementary information will be very valuable to better understand the geomechanics at work in a mine,” said Quenneville.

“But for now, we have a new tool that is already proving its usefulness in mines,” he said, “and we are looking forward to exploring its application in ground control management.”