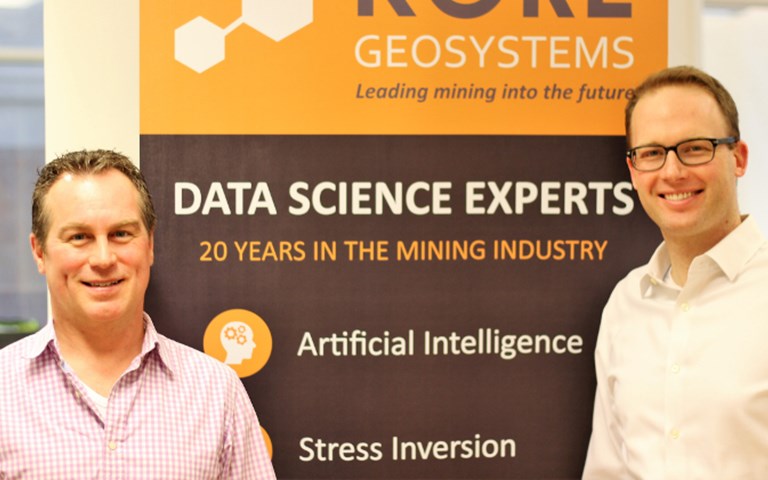 Vince Gerrie does not like repetition. “Doing the same thing over and over again, mundane and repetitive, really frustrates me,” he explained. “I have a passionate need to develop methods to avoid repetitive tasks.”

The two companies he has founded over an impressive 24-year career in mining services aim to cull tedious tasks on mine sites and improve operational efficiencies. Both KORE Geosystems and DGI Geoscience streamline operations by collecting and analyzing data to mitigate traditionally time-consuming jobs.

Gerrie launched his more recent venture, KORE, in 2015. The company designs hardware, like sensors and data acquisitions systems, that combines data science and artificial intelligence to improve how data is collected and used in mineral exploration. Last year, its smart-drilling technology caught the eye of the judges at Disrupt Mining – a Dragons’ Den-style competition at PDAC that celebrates mining innovation – who crowned it co-winner of the event, and in September the company negotiated a $1-million investment from Goldcorp, the lead competition sponsor. The technology captures and analyzes drill hole data right at the drill rig or immediately after drilling, curtailing the need to dispatch rock samples to a distant laboratory, an expensive and time-consuming process.

According to Gerrie, Goldcorp’s investment will help ideas become reality. “The big thing at the moment is the acceleration of technology development,” he said. “It gets frustrating when you have all these great ideas but don’t have the resources to execute them. Now it’s execution time!”

KORE was borne out of discussions at DGI, the drill hole data acquisition, analysis and integration company Gerrie founded in 1997. “After we realized how much value we could extract from data at DGI, we started looking further afield to other data sources that might be useful to clients,” Gerrie explained. The new company was incorporated when they saw “a market to solve problems using data sources above and beyond those DGI provided.”

Gerrie formed DGI in his mid-twenties, fresh out of a geoscience degree from the University of Waterloo, inspired by a formative student work placement in the Geological Survey of Canada’s borehole geophysics department. He had travelled the country collecting valuable downhole rock property information, including density, acoustic velocity, resistivity, conductivity, natural gamma ray and magnetic susceptibility.

Despite this type of analysis being performed routinely on oil and gas boreholes, it was rare in mining. “The industry was spending lots of money on drilling, but missing an opportunity to collect valuable information,” he said. Gerrie saw an opportunity and set off to the Northwest Territories to offer the service to the diamond industry. DGI grew from there.

Although his title remained constant at DGI for 17 years, Gerrie ensured that his responsibilities were constantly evolving with the growth of the company – and expects the same at KORE. “A big motivator for [company] growth for me is not necessarily financial gain,” he said, “but the challenge of solving new problems and taking on new roles and responsibilities.”