Caterpillar’s electric drive LHD test unit to be used at Canadian mine site into 2018
By Kelsey Rolfe
September 15, 2017 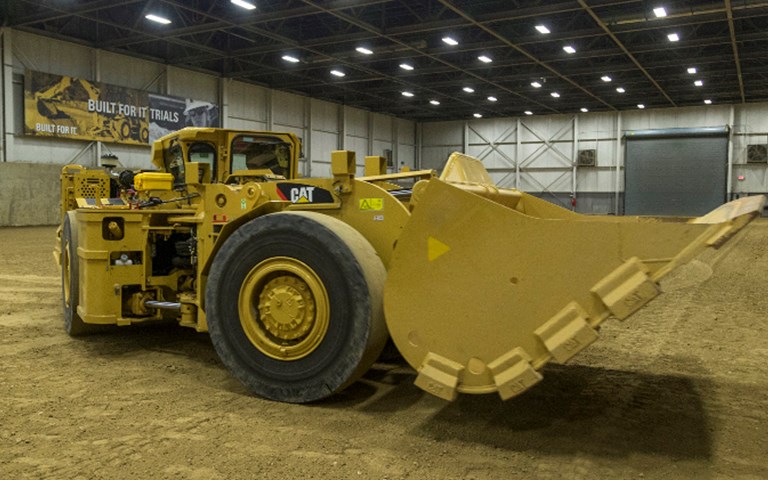 Caterpillar removed the engine, transmission and torque converter and reconfigured the engine end frame to fit the battery boxes and electric motors in its battery-powered test unit (pictured). Courtesy of Caterpillar

Caterpillar has developed a proof of concept battery electric load-haul-dump (LHD) that it will ship to a Canadian mine for testing this month, the company announced at a September 12 press briefing in Tucson, Arizona.

The company modified its R1300G underground LHD loader to include a lithium-based battery, and is developing on-board charging for the machine rather than a battery switch-out, for safety and “inventory management,” Jay Armburger, Caterpillar’s product manager for underground technology, told journalists.

The Tucson event was the first time Caterpillar has publicly discussed its proof of concept.

Armburger emphasized that the company “does not have a product to offer today on the market … what we have is a test bed.” Caterpillar will launch a product introduction program after more design and validation is done on the test machine.

“We’re focused on becoming a significant player for battery charging in the underground mining space,” Armburger said. “We’re investing in this space and we see a lot of opportunities for our customers.”

Because the R1300G is an older model "not equipped with electro-hydraulics," it is not optimized for the best battery life, Armburger said. A future design of the machine would increase battery life through load-sensing hydraulics driven by piston pumps.

He declined to comment on the current typical charging time for the battery but said the company expected to get it to 30 minutes or less.

The company began modifications on the machine in December 2016 and began testing it in May 2017 at its Peoria, Illinois proving grounds. The modifications included ditching the engine, transmission and torque converter, and reconfiguring the engine end frame to fit the battery boxes and electric motors.

The R1300G will move material at the Canadian mine until early 2018. Caterpillar declined to name the company.

Battery-powered electric vehicles have gained popularity as mining companies move to deeper underground mines in search of higher-grade ore and larger reserves. One of the biggest challenges with mining deeper into the earth is ventilating diesel emissions and keeping the tunnels air conditioned for worker safety and comfort.

Kirkland Lake Gold implemented RDH Mining Equipment’s battery-powered electric vehicles at the Macassa and South Mine Complex in 2012, and currently about one third of the site’s equipment fleet is electric. Glencore designed its Onaping Depth site around a planned all-electric mining vehicle fleet to combat ventilation challenges. And last September Goldcorp announced it would work with Sandvik and MacLean Engineering to design its Borden Lake project as an all-electric mine.