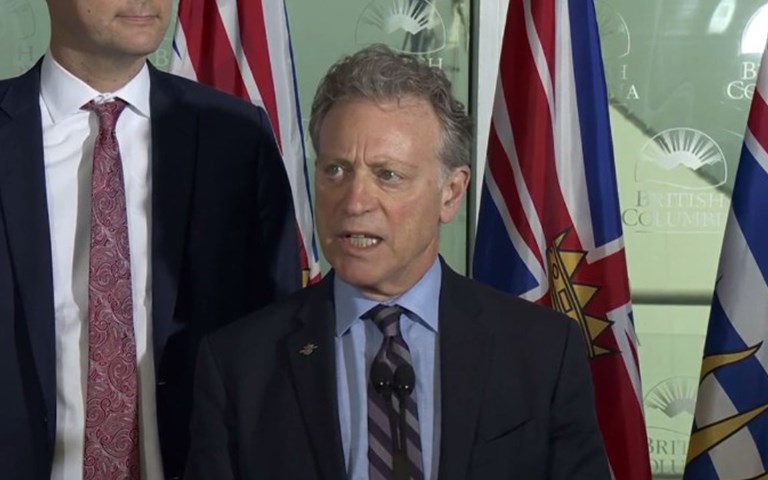 The Trans Mountain pipeline expansion is “simply too great a risk to our environment, our economy and thousands of existing jobs,” B.C. environment minister George Heyman told reporters. Screencap from Global News

Though it is still early days for British Columbia’s new NDP government, mining associations are cautiously optimistic for a good relationship with the new government. However, recent moves could indicate that the government intends to switch up its approach to mining and resource development in the province.

While the Liberals won two more seats in the May election than its closest rival, the NDP, the Green Party signed a cooperation agreement with the NDP to tip the balance and kick off the first minority government the province has seen since 1952. Two policy initiatives in that agreement – ordering a review of the province’s “professional reliance” system and pledging to stop the Kinder Morgan pipeline expansion – indicate that the government may strike a different tone than the former government in regards to resource development.

“This issue of Kinder Morgan is one that was critical to [the Green Party],” Weaver said during a press conference announcing the cooperation.

Cox also pointed out that during a Vote Mining campaign run ahead of the election by the province’s mining, mining supplier and mineral exploration associations, all parties were “strongly supportive of mining and ensuring we had a responsible, strong and robust mining industry.”

Among the candidates who sent replies to questions for the Vote Mining campaign was environment minister George Heyman. His responses highlighted the B.C. NDP’s promises to continue the flow-through share and exploration tax credits and remove the provincial sales tax charged on electricity used in mining operations. But Heyman also announced the government would seek intervenor status in an ongoing legal challenge to the federal government’s approval of Kinder Morgan’s Trans Mountain pipeline expansion, a promise both the NDP and Green Party made during the election campaign. A federal court granted the government that status on August 29.

Former B.C. Supreme Court justice Thomas Berger acted as the government’s external counsel, providing advice during the push to get intervenor status. Despite the legal challenges, Kinder Morgan has committed to begin construction in Alberta in September.

Cox noted the government’s choice to get involved in the lawsuit was not unexpected. “The government’s position on Kinder Morgan has been part of the NDP platform for some time. I am focused on ensuring that we have a strong mining industry in British Columbia for both current operations and upcoming projects,” he said.

An overhaul of the environmental review process – including specifically reviewing the government’s reliance on the opinions of qualified professionals hired by project proponents during environmental assessment reviews – is similar to one of several recommendations included in a 2016 provincial Auditor General’s report on the Mount Polley incident.

The terms of the review are still being hammered out, Cox said, adding that many stakeholders — including professional associations — would need to be involved. “It’s really quite a big, broad potential discussion.”

That auditor general’s report had also suggested establishing an independent unit for compliance and enforcement. At the time, the Liberal government did not fully accept that recommendation and questioned the conclusion that the government was too dependent on qualified professionals. “We do not accept that mere appearances are sufficient to warrant the act of removing compliance and enforcement from MEM,” the then-government said in its response. “Over-reliance on qualified professionals is not substantiated in the context of mining,” it added.

But creating an independent oversight unit is also something the new mining minister, Michelle Mungall, has been tasked with, in addition to establishing a new mining jobs task force. A spokesperson for the mining minister’s office emphasized that it was still very early in the mandate to discuss details about what Mungall may do in the future.

The task force is still in the early stages. Though the terms of reference have not been established yet, “we’re very encouraged by the commitment to have a task force on sustainable mining jobs,” Cox said. “That’s something that the government is structuring as we speak. We’re very excited to be a part of it.”

As the minister responsible for climate change strategy, Heyman’s mandate letter also includes several goals to reduce the province’s carbon emissions and increase carbon taxes in line with the federal government’s goals. During the campaign, the NDP promised to begin increasing carbon taxes sooner and more gradually than the Liberals.

Even as the government pushes toward a lower-carbon economy, Cox said he sees an opportunity for the mining industry. Electric motors generally require far more copper than conventional combustion engines, he noted, which could be a boon to the province’s copper miners.

“When you look at where we’re going as a society – to a low-carbon economy – mining is so essential to that.”