Cobalt Historical Society fundraising to repair the roof of the century-old Right of Way headframe
By Kelsey Rolfe
November 28, 2017 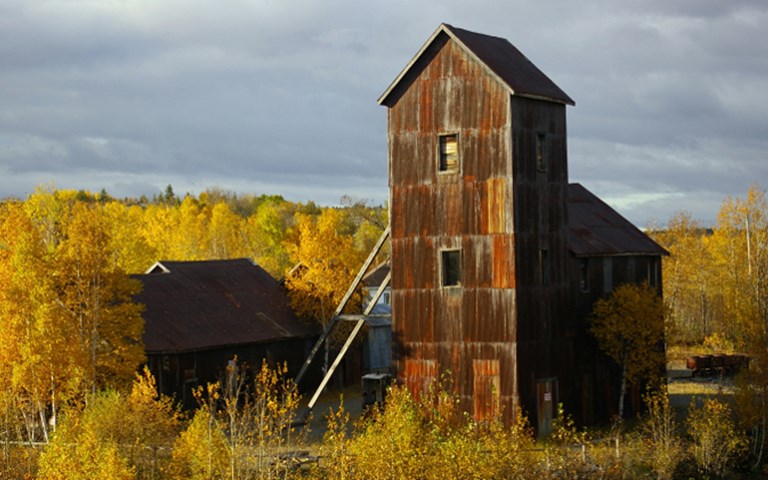 The Right of Way headframe is one of the better preserved headframes in the town thanks to previous restoration work done on its wood interior by the historical society. Photo provided by Charles Dumaresq

The Cobalt Historical Society is calling on the mining community to help repair the roof of the Right of Way headframe, a regional landmark that was erected more than 110 years ago as part of rush for silver in the northeastern Ontario town.

“It’s one of the last headframes standing in Cobalt,” said society board chair Maggie Wilson. “It’s become iconic. You can’t miss it when you come into town. It represents the town and it represents the heritage.”

The historical society has currently raised around a quarter of its $37,000 goal as of late November, said Wilson. It maintains the headframe as part of the Heritage Silver Trail, a self-guided tour through Cobalt and the back roads of the surrounding Coleman Township. The headframe itself can be accessed through pre-arranged tours for special groups.

The Right of Way headframe, located on the easement beside the town’s railway tracks, is one of the better preserved headframes in the town thanks to previous restoration work done on its wood interior by the historical society. Others still stand but they are on more unstable ground and are unsafe to go near.

But now the corrugated steel roof of the headframe has rusted through. “With the holes in the roof, water’s getting in and it’s threatening the interior,” Wilson said. “We really want to preserve the site as a whole because it deserves it.”

Wilson said the roof is the most pressing repair for the headframe, but that the society anticipates it will eventually need to reinforce the support legs.

Wilson said fundraising has been ongoing for about a year and a half and has involved direct mail campaigns and auctions, but is now reaching out to the broader mining community. The Township of Coleman and SMC (Canada) Ltd, the owner of the Penn Mill site in Cobalt, have both contributed. The society is in the process of getting charitable status so it can get discounts for the online fundraising platform GoFundMe and PayPal.

She said the society wants to make the repairs “as soon as possible. The longer it sits, the bigger the chance that the damage will be done.”

The headframe has been standing since 1906 and was refurbished in the 1950s when it became a part of the Cobalt Consolidated Mining Company, later Agnico Mines (which eventually merged with Eagle Mines Ltd to become Agnico Eagle). “Because it was used more recently than the other headframes of its era, it had a better chance of surviving,” said Charles Dumaresq, a geologist who authors the website Cobalt Mining Legacy.

Silver was discovered in the Cobalt area in 1903, and from 1904 to 1920 the area experienced a silver rush that surpassed the Klondike Gold Rush in terms of profit, production and long-term impact.

The Cobalt mining camp, which encompasses portions of the town of Cobalt and part of Coleman Township, was declared a National Historic Site in 2003. The area is regarded as the birthplace of Canadian hard rock mining.

“The headframes are really important as symbols of that history of what it means to be a mining town,” Dumaresq said. “I don’t think it’s an exaggeration to say this is part of our collective heritage as an industry.”