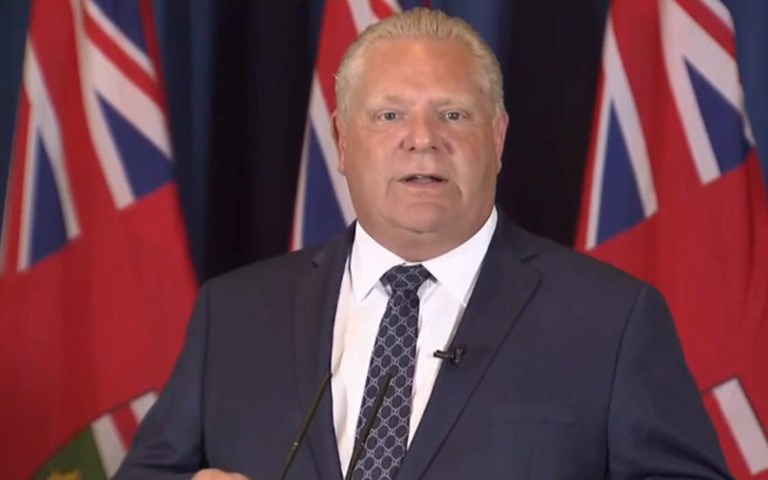 The Ontario Progressive Conservative (PC) party will form a majority government, ending the Liberal party’s 15-year reign in the province.

The PCs received 76 out of 124 seats in the provincial legislature, with the NDP taking 40 and the incumbent Liberals trailing behind with only seven seats, losing official party status. Provincial Green party leader Mike Schreiner clinched his party’s first-ever seat in the legislature with his election in Guelph.

“Tonight we have sent a clear message to the world: Ontario is open for business,” Ford told supporters at his election night party in Toronto.

Chris Hodgson, the president of the Ontario Mining Association and a former Ontario PC mines minister, said the association is "excited to work with the new government and cabinet, and we're confident of their mining background."

During the campaign, Ford was criticized for bucking the tradition of releasing a fully-costed platform. Ontario Premier Kathleen Wynne called the PC’s plan “not coherent,” and NDP leader Andrea Horwath mocked Ford for being “only prepared to write a list of things he might do and put it on the Internet.”

One of Ford’s major promises was to repeal Ontario’s cap-and-trade system, which went into effect in 2017, and take the federal government to court if it imposed its carbon pricing backstop on the province. “The prime minister’s hurting business in this country by giving them an unnecessary tax,” Ford said in February.

Based on an independent legal opinion written for Manitoba, where Premier Brian Pallister is also contemplating suing Ottawa, it is a fight Ford would probably lose. The Supreme Court would be more likely to uphold the carbon pricing plan based on the federal government’s broad taxation powers, Winnipeg lawyer Brian Schwartz wrote in October.

The PCs have also said they will “cut through special interest and bureaucratic delays” around the Ring of Fire. Developing the massive chromite deposit in northern Ontario has been slow as the provincial and federal governments negotiate with the nine First Nations groups in the area.

In August, Wynne announced the government had signed agreements with three First Nations to build an access road to the Ring of Fire, which would also provide all-season access to the Webequie, Nibinamik and Marten Falls First Nations. The road is part of the $1 billion the Liberals pledged in 2014 to invest in Ring of Fire infrastructure. The PCs have not said how much they expect infrastructure development to cost.

The party also promised to “move forward with resource revenue sharing from mining, forestry and aggregates” for northern towns and Indigenous communities, which they pegged as a $30-million per year cost starting in the second year of their mandate. They have not said how much communities would receive.

Hodgson said the association welcomed the revenue sharing. "We've been advocating this for a long time," he said. "We think that is where the impact is, and that's where the majority of the revenue should go."

Mining companies operating in the province can expect a tax break under the new government: the PCs said they plan to reduce the corporate tax rate to 10.5 per cent, down from 11.5 per cent currently.