Canada’s “Diamonds in the Rough” will be the first ever all-female team to attend International Mines Rescue Competition
By Kate Sheridan
May 24, 2018 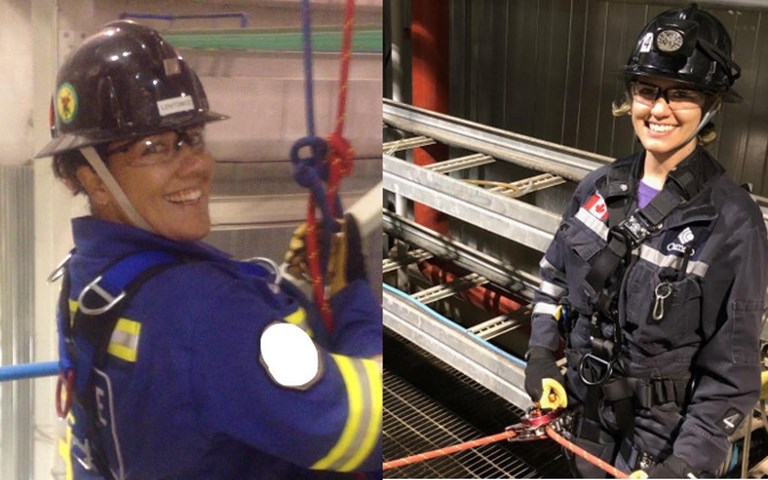 The International Mines Rescue Competition has a few rules. Every competitor must be wearing personal protective equipment (PPE), including gloves. They must be able to perform “long, arduous and physical labour.” And no competitor can have facial hair that might interfere with the seal of a facemask.

The Diamonds in the Rough should not have any problem complying with these rules – especially that last one. Every member of the eight-person mine rescue team, and one of the two coaches, is a woman – a first-ever in the competition’s history.

The team has been ten years in the making. Team coaches Kari Lentowicz, an emergency preparedness and response consultant, and Bruce Coley, a senior safety officer at Cameco and independent consultant, began discussing the possibility of creating an all-female team in 2007.

But even when Coley first approached Naomi Fugle about joining last fall, the idea seemed nebulous – and that did not really change until March. “It wasn't until maybe two months ago that Russia actually accepted us to go into the competition,” said Fugle, an environment officer at Cameco’s McArthur River mine and a member of the team.

More than a dozen teams will compete this year, including ones from Colombia, China, India, Turkey, and Zambia. Diamonds in the Rough is one of two Canadian teams; Kirkland Lake Gold is sending the other. The competition will take place in late September across different mines in Russia’s Sverdlovsk region, an area north of Kazakhstan, and has five components, including a mine rescue simulation in a real underground mine.

That simulation will literally be one of the first tests of the women’s teamwork. The team, which is spread out across Canada, has not met up yet, though they plan to train together in August. “We're going through Facebook to get to know each other and think about what we will be able to do the best,” Fugle said. “It's a lot of visualizing right now.”

Getting the funds to get to the training site – and then to Russia – is another huge part of the team’s preparations. Lentowicz estimated the team will need about $84,000 to train and attend the competition. The team has a GoFundMe page, and has received in-kind support from Impact Marketing and Covergalls, a company that makes PPE like coveralls and gloves that fit women better than conventional equipment. Women in Mining and Women in Nuclear Saskatchewan is currently considering how to assist the team with fundraising. In addition, some of the team members’ employers have given them paid time off to attend the competition, Lentowicz said.

Though financial resources are the latest problem, Lentowicz said that was not the biggest challenge the team faced. Finding enough women who were interested and qualified was very difficult. “There's not many of us and it's this one thing that's really connecting us,” Fugle said. So building the team has also meant building a network between women around the industry. “I may only know of one other girl, but same with the other girls that they'd invited on the team and then you actually start to see that there are more women out there,” she said.

Previous competitions have shown the advantage of having female team members. Some women are small enough to squeeze into spaces where their male teammates cannot go, Lentowicz said. And women may think of different solutions to a problem, Fugle said. Men may favor a strategy that relies on brute force more than women would.

And teams from countries where women generally do not work in mining have previously failed to recognize women in the mine rescue simulation as casualties that needed to be treated. “It was very innocently done,” Lentowicz said. “It was like, well, women don't work at the mine, so why would she be a casualty?”

That might seem laughable, but a “women don’t work at the mine” attitude can influence decisions in Canada too. Lentowicz recalled discussions around a new change facility being built at a mine operated by her former employer. The facility was to offer about a quarter of the locker space for women as it did for men. “I was like, ‘You need to make this bigger’ and they were like ‘Come on, we'll never fill that up.’ And with that attitude, of course you won't.”