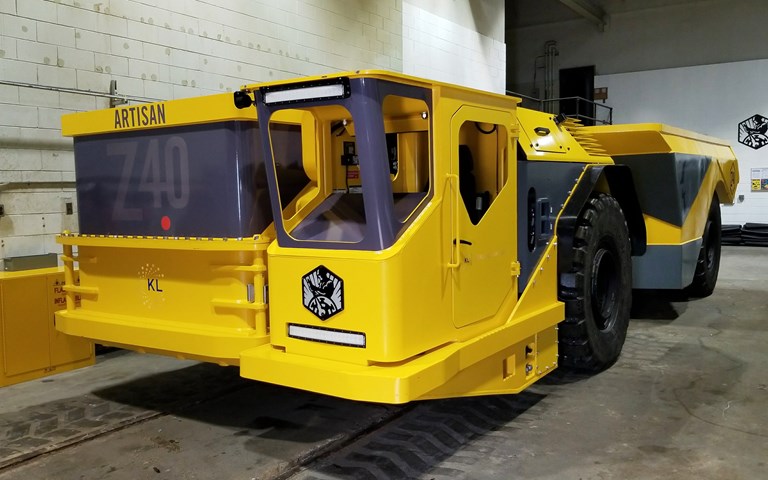 Kirkland Lake Gold expanded its fleet of electric vehicles at its Macassa mine in early March, with the addition of Artisan Vehicles’ Z40 40-tonne battery-powered underground haul truck.

The Z40 is Artisan’s first-ever battery-powered truck. It was delivered to Macassa just a little over two months after Artisan delivered its A4 battery-powered load-haul-dump (LHD) to Kirkland Lake’s Taylor mine near Matheson, Ontario.

Pierre Rocque, Kirkland Lake’s vice-president of Canadian operations, said there are more electric vehicle equipment purchases to come. “In 2018, we are expecting six more pieces of equipment: three Artisan Z40 trucks and three loaders,” he said. “The intent is to continue to increase the fleet size with battery-equipped vehicles.”

According to Artisan, the Z40 has almost twice the peak horsepower of a similar diesel hauler, and generates only one eighth of the heat. The hauler is also the smallest 40-tonne truck on the market, allowing it to operate in spaces meant for smaller trucks, the company said.

Kirkland Lake was an early adopter of battery-powered underground equipment, having used electric vehicles at its Macassa mine since 2011, when an expansion of the mine would have “doubled, or at least increased substantially,” the mine’s ventilation requirements, Rocque said. The mine now has 32 electric vehicles, making up 80 per cent of its fleet, from suppliers RDH Mining Equipment (recently acquired by SMT Scharf), Atlas Copco (now Epiroc) and Artisan.

Related: The move to battery-powered underground mining fleets is gathering speed and opening up miners to a new realm of possibility

Rocque said that since adopting the vehicles, the company had amassed 225,000 hours of operation with them. “That is a solid demonstration that this equipment works,” he said. Other miners have also taken note, with Goldcorp committed to having an all-electric fleet at its Borden project and Glencore doing the same for its Onaping Depth project, both of which are currently in development.

The advantages have gone beyond decreasing ventilation requirements. An electric vehicle fleet produces less heat, dust, vibration and noise, which improves the work environment. “We get better productivity,” Rocque said

Each piece of equipment comes with three batteries. At any given time, one will be in operation, one will be charging and one will be cooling. An average charge lasts two to four hours.

The batteries for the LHDs at Macassa are changed using a crane, but the Z40 will have a different swapping process. Artisan has developed a system for loading and unloading haul truck batteries at the swap station without the need of a crane.

Kirkland Lake has had to make changes to the power distribution throughout the mine to accommodate the power needs of battery charging, but no additional infrastructure was needed.

There are a few downsides to using electric vehicles, Rocque said. Kirkland Lake’s three suppliers have different requirements for charging, something he compares to the difference between Apple and Microsoft computers. “We would like to have one computer that does everything, and you don’t have to worry about the name tag, but we aren’t there yet,” Rocque said.

The cost of electric equipment is also much higher than diesel equipment, Rocque added, and new parts are expensive. But he said that in the long-term, the company is “very confident that we are going to see savings coming from the operation of the equipment itself.”