The next phase of the Canadian Minerals and Metals Plan establishes a vision with six strategic directions for the mining industry in Canada
By Carolyn Gruske
March 02, 2020 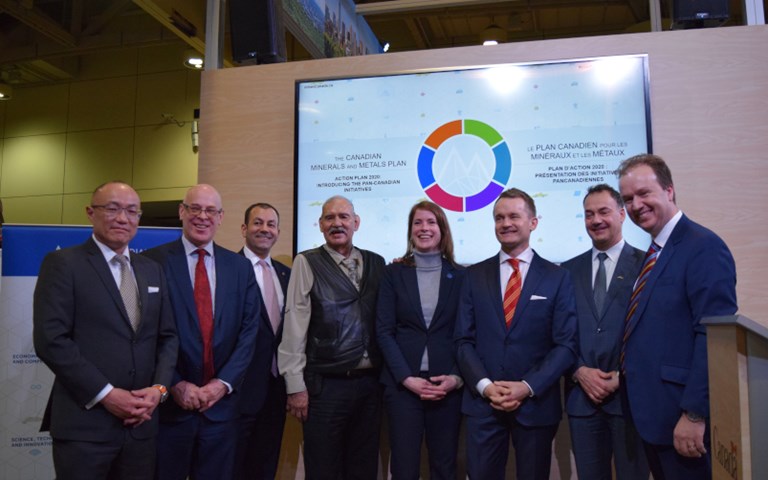 One after another, a parade of political dignitaries and mining industry professionals took to the stage at the Canada Pavilion on one of the PDAC 2020 trade show floors all to show their support of the next phase of the Canadian Minerals and Metals Plan (CMMP).

Known as Action Plan 2020: Introducing the Pan-Canadian Initiatives, it outlines a vision with six strategic directions, though it is still in its preliminary stages. Federal, provincial and territorial environment ministers intend to further develop the plan during their upcoming energy and mines ministers’ conference in July and then issue an updated version.

The action plan proposes strategizing approaches and programs and initiatives to enhance the Canadian mining industry’s economic development and competitiveness, advance the participation of Indigenous Peoples in the mining industry, protect the environment, encourage scientific and technological innovation, deliver benefits for communities located near mining activities and strengthen Canada’s position as a world leader in the industry.

Introducing the Minister of Natural Resources Seamus O’Regan at PDAC, Paul Lefebvre, MPP for Sudbury and parliamentary secretary to the minister, said that “Canada is a mining nation. [Mining] built our middle class. As we move into this new century of clean growth, we are laying the foundations for it to continue to do so.”

O’Regan lauded the CMMP, which was launched at last year’s PDAC conference, and proudly stated that the plan had been downloaded in 96 countries. “That proves to me, once again, that when the world wants to learn about the best in mining, it looks to Canada.”

He also emphatically stated “there is no road to net zero without mining,” and said the industry needs “to play a central role in tackling climate change” – one of the action plan’s goals.

O’Regan explained that for each of the six strategic directions, there are targets and paths laid out that will lead to their achievement. “These will help us capitalize on what I believe is a once-in-a-generation opportunity.”

Related: Joint Action Plan to increase bilateral cooperation and Canadian competitiveness in minerals such as uranium and rare earth elements

According to the minister, the intention isn’t just to have one action plan, but a series of evolving plans addressing different issues and situations. This way technological advances or innovations can be incorporated and initiatives can be measured, tracked and evaluated for effectiveness. Follow-up action plans will be released in 2021, 2022 and every three years after that.

Another key factor is the pan-Canadian perspective: one that involves not just all levels of government jurisdictions but members of the mining industry and even those who aren’t directly involved in mining.

As part of the competitiveness strategic direction, the action plan calls for the creation of a pan-Canadian geosciences strategy to investigate what geoscience innovations are needed to support the industry. It is also intended to look at the geoscience needed for better land-use planning and community understanding. New tools, such as artificial intelligence also fall under this strategy.

For the Indigenous participation focus, workshops are to be held across the country for the sharing of ideas about how to increase Indigenous and local procurement, how to develop Indigenous companies and service providers and how to benefit from best practices developed by other Indigenous businesses.

The environmental strategic direction covers developing new mandates for orphaned and abandoned mines and tailings as well as examining the latest technologies that will ensure reclamation is being done correctly and set high standards.

For the science and technology innovation aspect, the goal is to examine the Canadian innovation ecosystem and work with industry to make it better and stronger, while bringing partners together to tackle some of the big challenges the industry faces such as tailings or water usage. It is expected that NRCan’s Crush It! Challenge will serve as a model for other innovation challenges.

Under the community banner, the goal is to figure out how to communicate to Canadians that mining is a modern industry – that offers all kinds of employment opportunities, not just hard labour underground – to attract new people. Promoting mineral literacy is another goal of this strategic direction.

From an international trade and political perspective, perhaps the key goal is to develop a Canadian brand that Canadian companies and individuals can use as their calling card at trade shows and conferences – one that communicates to the world that Canada is a leader in mining practices, services and technologies, and that the country is the preferred source for responsibly mined minerals.