Quebec and Canada invest in electric mining trucksThe $3.6 million in federal and provincial funding will be used to develop a fast-charging electric vehicle for open-pit mining

The $3.6 million in federal and provincial funding will be used to develop a fast-charging electric vehicle for open-pit mining
By Tijana Mitrovic
November 04, 2020 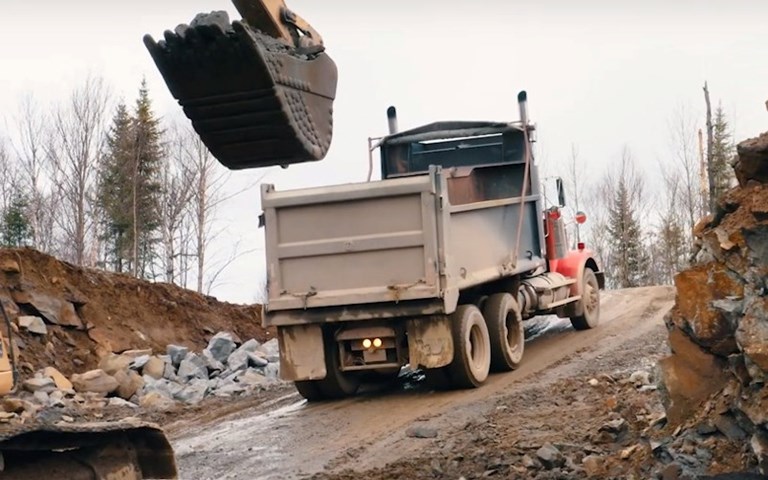 The electric propulsion system will be tested at Nouveau Monde's Matawinie deposit in Saint-Michel-des-Saints. Courtesy of Nouveau Monde Graphite.

On Nov. 2, the federal and Quebec governments announced that they would provide nearly $3.6 million in funding towards developing a fast-charging electric system for open-pit mining vehicles.

Propulsion Québec, the Innovative Vehicle Institute and the National Research Council of Canada – as well as industry members Adria Power Systems, Dana TM4, Fournier & Fils and Nouveau Monde Graphite – are working on designing and developing an electric propulsion system and a fast-charging battery solution to use for a 40-tonne mining truck. Funding will be used to support the project, which, according to Natural Resources Canada (NRCan), could potentially eliminate more than 220 tonnes of greenhouse gas emissions annually per vehicle and reduce operating costs for miners.

Project partners believe that the program is a turning point in the electrification of heavy vehicles in Canada and North America as there are currently no electric-powered heavy-duty trucks that are suitable for open-pit mining. According to the partners, the vehicle’s design will also be adaptable for other heavy mining applications.

The project’s industry partners have a variety of roles in project development. For example, Fournier & Fils will provide a 40-ton Western Star 6900XD truck for the project, and its technical experts will work converting the truck to accommodate its new electrification components. Dana TM4 will work on developing the vehicle’s electric motor, while Adria Power Systems is working on the development of a high-power charging infrastructure and on battery assembly. The project will be tested at Nouveau Monde Graphite’s mine site in Saint-Michel-des-Saints and at a Fournier & Fils quarry in Val-d’Or, both in Quebec.

“With companies like Nouveau Monde working towards all-electric mines and producing the critical minerals we need for advanced batteries, we are positioning Canada's mining industry as a progressive, sustainable global producer of critical minerals needed for the transition to a clean energy future,” parliamentary secretary to the Minister of Natural Resources Paul Lefebvre said.

NRCan is investing $2 million for the project under its Clean Growth Program, following the federal government’s pledge to support the promotion of off-road electric vehicles in mining announced earlier this year. The Quebec government is contributing $1,479,718 in funding from its INNOV-R program, while the Société du Plan Nord is also contributing $100,000 towards the program under the Fonds d'initiatives du Plan Nord.

According to Nouveau Monde Graphite, the program will conduct its first real-world test run in spring 2022 at the earliest.