Over 6,000 attendees gathered in Vancouver to discuss the challenges of finding new ore deposits, raising capital for exploration, and building strong, inclusive relationships with Indigenous Peoples
By Kylie Williams
January 28, 2020 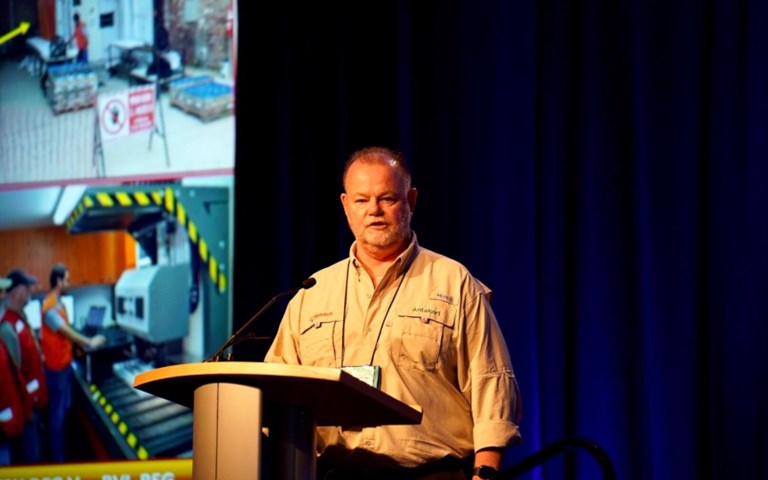 First speaker at the Seeing the Unseeable technical session Kevin Heather, Chief Geological Officer at Regulus Resources, presenting on hyperspectral scanning of core at their project in Peru. Courtesy of AME/Velour Productions.

Supplied with the 2020 conference theme “Lens on Discovery”, Dr Craig Hart, director of the Mineral Deposit Research Unit at The University of British Columbia, gathered a diverse mix of presenters working toward ‘Seeing the Unseeable’ for the B.C. Association for Mineral Exploration (AME) 37th annual Mineral Exploration Roundup conference’s theme technical session that he chairs each year.

“Every company is looking for a competitive advantage,” said Hart, “They want to know what’s new, what’s hot. They want to be the first ones exploit the opportunity.”

Over the past year, Hart sought out some of the “first movers” in the industry who are transforming methods, strategies, technologies and techniques into functional applications that are allowing explorers to see through the barriers to mineral exploration, such as deep cover.

“The cryptic part is that an ore deposit is only so big, but it has this footprint or halo of other components around it,” said Hart, “We’re looking for detectable features. The power of exploration is actually being able to predict and then detect where those ore deposits could be.”

The session highlighted different ways of remotely and indirectly detecting deposits, from using genomic tools to map the microbial communities that live in cover sediments above ore deposits, to installing sensors that measure cosmic radiation travelling through rocks to highlight variations in rock density.

“Most mineral deposits are associated with very dense minerals,” said Hart, “So, you can essentially map the edge of an orebody, if you can get underneath it.” The new technology, known as muon tomography, is being developed by CRM GeoTomography Technologies and has been tested by several mining companies, including Teck Resources at the Pend Oreille mine in Washington, U.S.A.

One challenge, said Hart, is managing the huge volumes of data these technologies generate. He cited the example of Regulus Resources who are now using Corescan’s hyperspectral scanners as standard operating procedure on all drill holes. The scanners can map millions and millions of individual crystals within a metre of core but generate up to 60 gigabytes of data per metre.

Hart also acknowledged that however difficult it may be to find an ore deposit, it is only the first step in making a mine.

“It’s not an asset until you find somebody who lets you mine it,” said Hart, “You need to get the approval of various landowners, from governments, taxpayers and First Nations before it actually has any value.”

Several Elders and leaders in First Nations associations praised the work that members of the B.C. exploration community were already doing to include affected First Nations in joint decision making on mineral resource projects around the province.

Related: New money and new people are flowing into the province’s mining regions

B.C. is the first province in Canada to adopt UNDRIP and the legislation sets out a process to align B.C.’s laws, including resource development legislation, with the declaration.

“We are really proud of the ‘reconciliaction’ AME members are already taking,” said AME’s new president and CEO, Kendra Johnston, “There has been a generational shift in our industry. Over my 15-year career in mineral exploration, I cannot remember a time when conversations with First Nations were not a normal part of a mineral exploration project.”

At the conference opening ceremony, the BC Minister of Energy Mines and Petroleum was Michelle Mungall, but by conference end, it was Bruce Ralston, following a mid-week cabinet shake-up announcement by Premier John Horgan. AME stated in a January 22 news release that the association is “looking forward to working with Minister Ralston in moving forward key initiatives and priorities for the mineral exploration industry”.

AME will also continue its relationship with Minister Mungall who was appointed to the role of Minister of Jobs, Economic Development and Competitiveness.

“We are also looking forward to continuing our relationship with Minister Mungall in her new role in nurturing a competitive mineral exploration industry that supports economic growth for communities in B.C.,” said Johnston in the release.