The student mine rescue team will host the first mine rescue competition of its kind in Canada
By Tijana Mitrovic
February 07, 2020 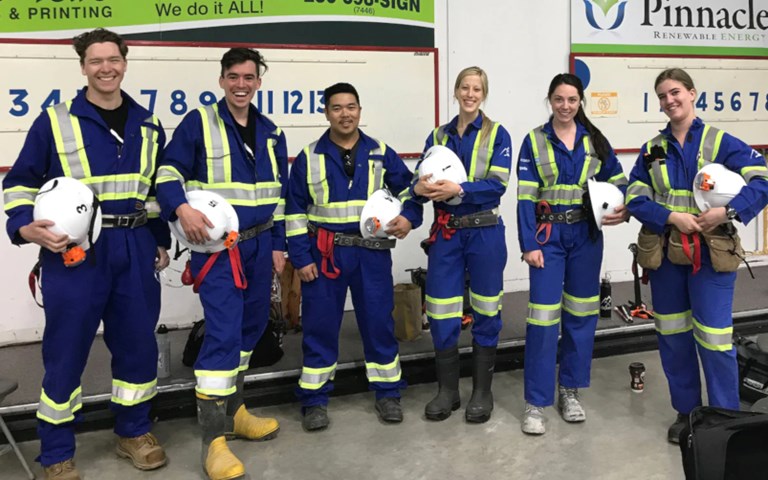 The University of British Columbia's mine rescue club. Courtesy of UBC Mine Rescue.

Mining engineering students from the University of British Columbia’s (UBC) class of 2020 are looking to make a little bit of history this month. The school’s mine rescue club is hosting a student-led competition that will be the first of its kind in Canada. The Canadian Inaugural Mine Rescue Competition will take place Feb. 21 to 22 at UBC and challenge student teams from four universities to work together in five mine rescue tasks.

According to Jill Newell, the project lead for the competition, the UBC mine rescue team has been discussing the idea of this competition for years. “It's hard when you're a full-time engineering student to actually take the leap of faith and go,” Newell told CIM Magazine in an interview. “This year I thought 'it's my final year at UBC, why not do it?' It's the off-year for the Colorado International one so I thought this was the best time to do it.”

UBC Mine Rescue hopes that its competition will inspire students at other universities to organize their own mine rescue teams or competitions. The team formed in 2011 and is currently one of only three competitive student mine rescue teams in Canada. After competing in the U.S., where mine rescue is more common to a mining engineering curriculum, the team was inspired to organize their own competition modelled after the biannual Intercollegiate Mine Emergency Response Development held by Colorado School of Mines.

When the team first began organizing the competition, Newell reached out to the industry’s safety and rescue companies for support such as Dräger Canada, Ontario Mine Rescue and Dynamic Rescue Systems. “Then I started reaching out to schools to make sure we actually had people to compete, and after that it was then reaching out to the industry to get financial backing,” Newell explained. “Once we had all that in place it's just been getting everything lined up, getting everybody communicating with each other and getting everything sorted: equipment to forms, to insurance, to everything.”

Mine rescue teams from UBC, the University of Alberta, Laurentian University and the Colorado School of Mines will be competing over the weekend in several challenges, which include an underground obstacle and recovery task, triage first aid, firefighting skills, a BG 4 – a Dräger closed circuit breathing apparatus – technician task and a written exam. The task-based challenges will focus on the four main priorities of mine rescue: safety, rescue of trapped workers, putting out any kind of fires and rehabilitation of mines.

“It's teaching you how to face problems that you've probably never faced, work together and have leadership,” Newell explained.

Each challenge will be hosted and judged by an industry partner on a merit-based approach. “We want to congratulate the teams on how they're approaching [the tasks]”, Newell said. “We're really gonna be sure they're judged based on what they do versus what they might not do, to stay positive.”

Newell knows first-hand that teams will have to train hard and work together to take on the competition’s practical challenges. “One of the biggest things is teamwork and communication… That's what will win you the competition – being able to work together and keep communication open so everyone knows what to do” Newell explained. “We're hoping that more students and more universities will take on the initiative and be a part of [mine rescue events].”