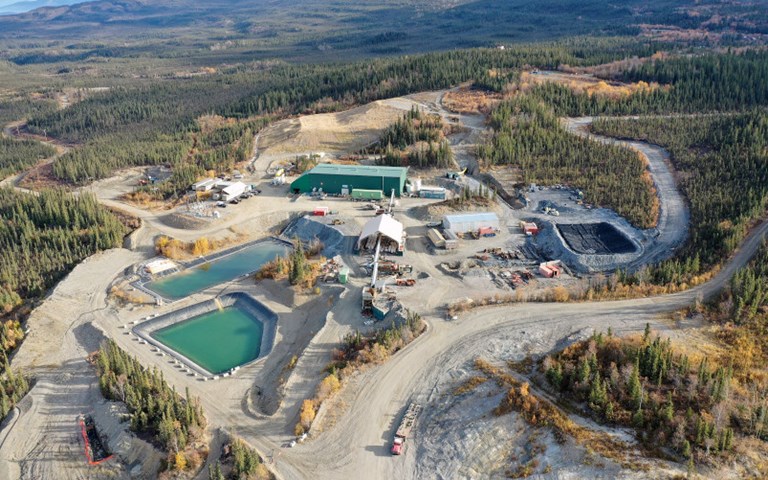 Alexco announced that it has received the final water use licence for its Keno Hill Silver DIstrict project in the Yukon. Courtesy of Alexco Resource Corp.

Welcome back to your weekly mining news recap, where we catch you up on some of the news you may have missed. This week’s headlines include Teck Resources testing copper alloy to reduce germs on Vancouver public transit, the benefits of addressing human rights impacts early and Vale working on a hard-rock cutting project at its Sudbury Garson mine.

Newmont has committed to reducing its greenhouse gas emissions by 30 per cent by 2030 and reaching net zero emissions by 2050. The new targets build on the company’s existing reductions target of 16.5 per cent by 2020 and will work towards meeting the Paris Agreement objectives. The company plans to implement a new energy and climate investment strategy in order to ensure project decisions such as the selection of production equipment are in line with the new targets.

Two employees have tested positive for COVID-19 at 1911 Gold’s Rice Lake operations in Ontario. According to the company, the two cases are asymptomatic and had limited interaction with other personnel at Rice Lake, where there are currently no reported symptoms among the workforce. The company has temporarily suspended operations and all travel to the site.

When the COVID-19 pandemic first emerged, mining companies introduced new health and safety measures and changed the way work is done. In the face of the ongoing pandemic, mining companies have continued to evolve their safety and health protocols in order to protect employees and vulnerable populations and maintain production. Companies are implementing measures, such as staggered shifts and employee screening, and collaborating with fellow industry members and government officials to move forward.

Teck Resources announced that it will test copper alloy surfaces on high-touch areas in a pilot project on public transit in Vancouver. Copper alloy surfaces are naturally antimicrobial, self-sanitizing. The company will fully fund the project under its Copper & Health program and will test the effectiveness of various copper surfaces in reducing germs throughout four weeks on two high-traffic buses and two SkyTrain cars.

Human rights impact assessments are critical to gathering local data and building trust with communities, but many Canadian mining companies conduct these studies during or after project construction. While doing these assessments early might increase upfront costs and extend project timelines, they also help companies avoid later lawsuits, reputational damage or even human rights abuses. Edie Hofmeister writes that mining companies should address human rights impacts early in their projects, beyond simply conducting due diligence, in order to improve ESG risk management and establish a social licence to operate.

Geoscience BC has published a new report assessing the potential for low-carbon mining in British Columbia at operations such as FPX Nickel’s Baptiste project. The report illustrates the carbon mineralization potential of rock groups throughout the province and, according to Geoscience BC, supports further research into combining these rocks with resource development to help decarbonization. UBC researchers are currently conducting a field test of the carbon-capture potential of rocks at the Baptiste deposit, and the company will report the preliminary findings in the first quarter of 2021.

Vale has teamed up with Komatsu and the Canada Mining Innovation Council to conduct a hard-rock cutting project at its Garson mine in Sudbury, as reported by International Mining. Vale will use a new Komatsu hard-rock cutting machine to try and access the mine’s McConnell orebody and test out the health, safety and environmental aspects of the mechanical rock excavation process. According to the company, the machines will be sent to the mine in early 2021 and underground cutting will start in April 2021.

Industry associations and analysts at the Conference Board of Canada and C.D. Howe Institute believe that Canada’s resource and energy exporters will benefit with Joe Biden as president of the United States, as reported by Business in Vancouver. According to the conference board, president-elect Biden is likely to pursue a trade policy that favours strategic allies such as Canada. Analysts believe that this will solve some ongoing U.S.-Canada trade disputes, such as aluminum exports, and improve Canada’s business investment environment.

Tamarack Mining Services is a new company aiming to build purchasing power among junior and mid-tier mining companies in order to improve their collective buying power, as reported by Timmins Today. As a group purchasing organization, the company negotiates contracts with suppliers on behalf of its companies for mining items and services such as explosives, fuel and personal protective equipment. Since its launch on Sept. 1, the company has already signed up 11 mining companies, including Wesdome Gold Mines, and has generated over one billion dollars in annual procurement.

Harte Gold announced its third quarter results for 2020, reporting production of 6,218 ounces of gold, compared to 6,069 ounces of gold produced in last year’s third quarter. The results follow the restart of operations at the company’s Sugar Zone mine on July 17 and process plant on Aug.5. Alexco Resource Corp. also announced in its third quarter results that it received the final water use licence for its Keno Hill silver district and was on track to finish the mill commissioning and begin producing silver concentrate in this year’s fourth quarter. In its Q3, Dundee Precious Metals reported the production of 79,844 ounces of gold in concentrate. Last year the company produced 65,642 over the same three months. Its all-in sustaining cost per ounce of gold was down US$100 to $640/oz as compared to the same period in 2019.