PDAC reveals 2022 award winnersWinners will be honoured for their work in prospecting, finance and sustainability

Winners will be honoured for their work in prospecting, finance and sustainability
By Olivia Johnson
December 16, 2021 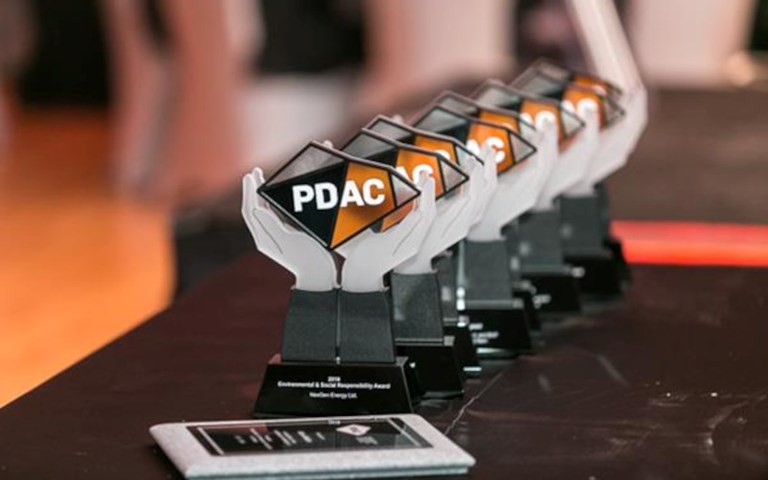 The 2022 award winners will be honoured during the PDAC 2022 convention in March. Courtesy of PDAC.

The Prospectors & Developers Association of Canada (PDAC) will honour six recipients from across Canada for their work in the mineral exploration and mining industry. Recipients will be honoured during the annual PDAC Convention in Toronto in March 2022, marking the 44th year of the awards showcase.

Geologist and president of C.J. Greig & Associates Charlie Greig will receive the 2022 Bill Dennis Award, recognizing his contribution to the prospecting and exploration industry or a significant mineral discovery.

Greig, then vice-president of exploration at GT Gold, and his fellow explorers drilled soil anomalies at the Tatogga Project in 2017, intersecting high-grade gold. They made two discoveries in the Golden Triangle region of British Columbia, the Saddle North gold-rich copper porphyry deposit and the Saddle South gold-silver zone vein.

The team also launched a separate drill program at Tatogga and, in September 2018, they intersected 430 metres of 0.7 grams per tonne gold and 0.4 per cent copper. Newmont eventually invested in GT Gold, raising its stake from 10 per cent to 15 per cent through an $8.3 million private placement and eventually acquiring full ownership of GT Gold for $393 million in 2021.

The 2022 Distinguished Service Award goes to Keith N. Spence, CEO of Global Mining Capital. Spence, an expert in geology and finance, will be honoured for more than twenty years of dedication to PDAC.

Spence earned a BSc in geology from the University of Western Ontario and completed his MBA at Western’s Ivey School of Business. Eventually, he graduated from Harvard University’s Global Management program.

In 1999, following the fallout of the Bre-X scandal, Spence acted as co-chair for the CIM committee that developed the Valuation Standards and Guidelines for Mineral Properties (CIMVAL), which ensure a qualified person conducts valuations and discloses all relevant information when valuing mineral properties.

During his two decades with PDAC, Spence has helped shape policy and programming direction. He has served on the board of directors, the convention planning and securities committees and the international affairs committee. He has furthered PDAC’s international reputation by acting as a representative in China, served as the chair of the Mineral Economics Society and acted as a member for CIM.

Related: A prolific company builder, a powerful regulator, an influential metallurgist, a founder of an important mine and a legendary prospector will be inducted into the Hall of Fame in 2022

Colin Webster, vice-president of sustainability and external affairs for Alamos Gold, will receive the Skookum Jim Award, which recognizes members of Indigenous groups who have made valuable contributions to mining in Canada. An Algonquin member of Kitigan Zibi Anishinabeg in Quebec, Webster has used his years of engineering experience and environmental management skills to establish trust with Indigenous communities on exploration and mine development projects.

Webster grew up in Kirkland Lake, a small mining community in northern Ontario. He earned a BSc in mining engineering from Queen’s University in 1990 and a diploma in environmental technology from Fanshawe College.

Webster helped build trust with the Marcel Colomb First Nation by communicating the value of sustainable mining in a community that had faced previous mining-industry challenges. He also worked as the vice-president of sustainability for Noront Resources with First Nations communities in the James Bay Lowlands area. He ensured community members understood the mining cycle and business opportunities while addressing concerns about development.

He also co-founded Blue Heron Solutions for Environmental Management to provide expertise for all aspects of environmental management including dealings with industries and First Nations communities.

The Sustainability Award – which honours an organization or individual for dedication to preserving the environment – will go to Sabina Gold & Silver Corp for its initiative to protect caribou in Nunavut.

Sabina’s 2015 application to develop the Back River Project was rejected by the Nunavut Impact Review Board, citing concerns for the caribou herds in the region. Sabina worked with the government, community and other stakeholders to create a caribou protection plan. Inuit monitors scout the region for caribou and operations adjust depending on the vulnerability of the herd.

Other initiatives include investing in hybrid energy systems, funding the restoration of the creek into Bernard Harbour for the char population, investing an initial $4 million into a wealth creation fund to further employment opportunities in Kitikmeot communities, donating microscopes to schools to promote STEM learning and a food security program.

The Viola R. MacMillan Award – an award that demonstrates leadership in management and financing – goes to Lundin Gold for financing and developing the Fruta del Norte mine in Ecuador.

Kinross Gold had previously spent $1.2 billion on the Fruta del Norte deposit, but when negotiations with the Ecuadorian government fell through, Lundin stepped in and made a deal worth US$240 million to take the mine off Kinross’s hands.

Lundin Gold raised $1 billion to construct the mine using a combination of debt, streaming and equity financing. Australian-based Newcrest Mining made a $250 million equity investment. The company’s ability to mitigate environmental and social impacts earned them favour with the community and helped with fundraising.

Fruta del Norte reached commercial production in February 2020 and is expected to produce at least 4.7 million ounces of gold over 14 years.

Rio Tinto will receive the Thayer Lindsley Award for a significant mineral discovery. In late 2017, the Rio Tinto exploration team intersected a copper-gold mineralization covered under rocks and sediments that would eventually be known as the Winu deposit.

Australia’s Paterson Province may be known for gold, but geologists Helke Dalstra and Jennifer Maguire and exploration manager Mawson Croaker estimated that there could also be porphyry deposits. They identified targets, followed up with airborne geophysical surveys and found a shallow EM conductor that coincided with one of their targets.

Travel, extreme temperatures and wildfires made accessing the region difficult. Despite the conditions, Rio Tinto found near-surface copper-gold mineralization and was able to expand the resource to support the development of an open pit mine.