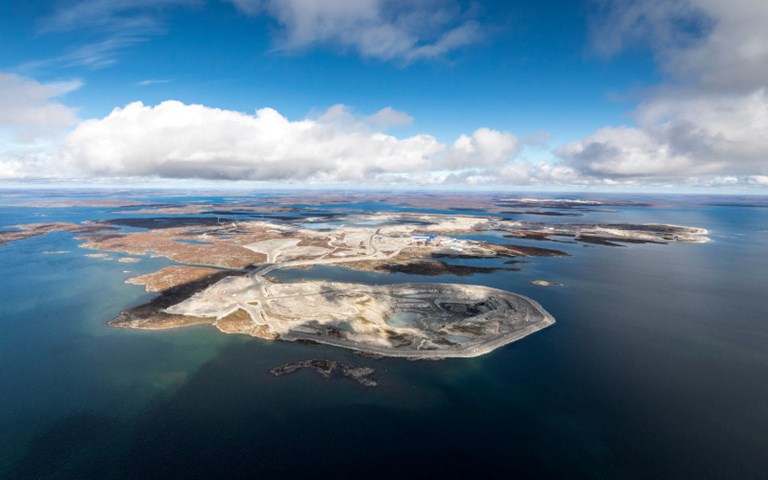 Rio Tinto has become the sole owner of the Diavik diamond mine as a result of Dominion Diamond filing for insolvency protection in April 2020. Courtesy of Rio Tinto.

Welcome back to your weekly mining news recap, where we catch you up on some of the news you may have missed. This week’s headlines include the impacts of heavy rain fall in British Columbia, a new network to help commercialize mining innovations and increased production at a Quebec aluminum smelter.

Heavy rainfalls have caused flooding and mudslides in B.C., and some mining companies are having their operations disrupted as a result. Teck Resources and Centerra Resources have seen their logistics chains between the ports and their operations interrupted, though production at the mines has not been affected. Teck also announced an up to $250,000 donation, split between the Canadian Red Cross and the BC SPCA.

Installing an electric fleet at an underground operation can improve more than just air quality, it can also improve operating efficiencies and automation. Whereas diesel-powered vehicles have a lag between the throttle and the drive wheels, which requires more skill from the driver when filling the scoop,  in electric vehicles the motor is essentially connected directly to the wheels, resulting in less loss of power and a higher degree of precision when loading from a muck pile. This precision is also helpful when trying to solve the challenge of autonomous scooping.

More mining companies looking to become publicly traded companies are turning to special purpose acquisition companies (SPACs) for a fast and simple solution. SPACs produce no goods and offer no services, but instead exist solely as investment vehicles with a mandate to seek out businesses, merge with them and take them public. SPACs can provide easy access to capital through large merger deals and can allow junior miners to quickly grow and begin trading publicly.

Rio Tinto has become the sole owner of the Diavik diamond mine in the Northwest Territories after buying the 40 per cent share held by Dominion Diamond Mines, as reported by Mining.com. Rio Tinto had previously stated that it had no plans to take over the mine, but a 19-month process triggered by Dominion filing for insolvency protection handed the mine to Rio Tinto in exchange for releasing Dominion from its liabilities and obligations for the joint venture. Production at Diavik is expected to end in 2025.

Sudbury’s Centre for Excellence in Mining Innovation (CEMI) has launched a new network dedicated to the commercialization of mining innovations, as reported by the Toronto Star. The Mining Innovation Commercialization Accelerator Network (MICA) will allow members to apply for funding for their projects and will offer them access to several networking opportunities as well. The network will be based in Sudbury and is aiming to commercialize 30 new products and services within the industry.

Canada’s Oil Sands Innovation Alliance (COSIA) has approved a new feasibility study to test the use of geothermal energy to power an oil sands mine over a 30-year life. The study is scheduled to be completed in early 2022, and will trial Eavor Technology’s Eavor-Loop, which uses existing oil and gas drilling technology to build a deep subsurface heat exchanger to collect heat from below the earth’s surface. If successful, the technology is expected to cut emissions by almost 60 kilotons of CO2 per year.

The COP26 talks concluded with a deal to reduce emissions, but key language about ending the use of coal power was given a last-minute change, as reported by CTV News. A change promoted by India, one of the world’s largest users and producers of thermal coal, was accepted to “phase down” coal, as opposed to “phase out” its use. While the agreement might not have passed without the change, officials are concerned that the conference did not achieve enough to fully make progress towards meeting a 1.5-degree Celsius global warming limit.

The global silver market will be seeing demand reach 1.29 billion ounces this year, its highest since 2015, as reported by Kitco News. A new report from the Silver Institute is showing that industrial usage is the main driver behind the increase in demand, with the creation of photovoltaics (otherwise known as solar panels) drawing an increasing amount of the supply when compared to previous years.

The panel gathering public input on coal mining in the Alberta Rockies says its report has been given a six-week extension due to overwhelming feedback from Albertans, as reported by CBC. The panel says it has received over 1,000 emails, 170 written letters as well as materials from meetings held across the province. Work on the report began in March after a public outcry in reaction to the province’s United Conservative Party government announcing it would be removing environmental protections that had banned coal mining in the Rockies.

Rio Tinto will be investing US$87 million to increase capacity at its aluminum smelter in Saguenay-Lac-Saint-Jean, Quebec, by 45 per cent. Sixteen new smelting cells are expected to produce 26,500 more metric tonnes of aluminum per year, bringing the smelter’s overall annual capacity to 86,500 metric tonnes and providing 100 new jobs. Work on installing the cells will begin in spring 2022 and be completed by the end of 2023.