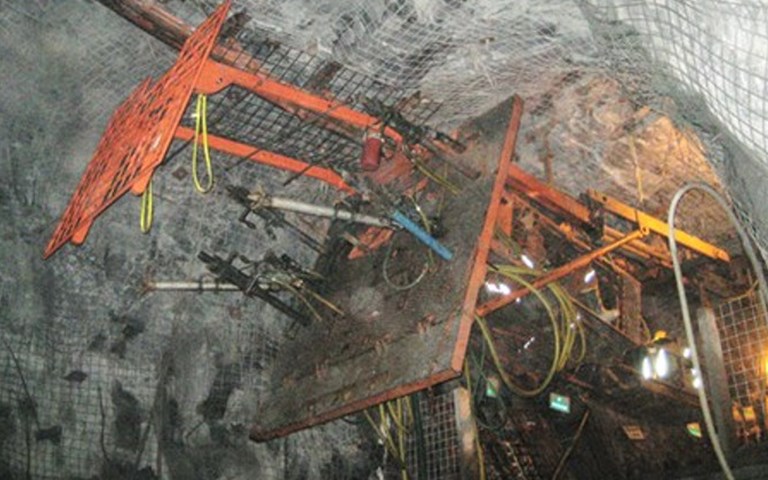 An alimak leaves its nest to climb into a raise | Courtesy of Manroc Developments Inc.

Three-quarters of the way into 2014, it became clear that this was a very good year for Claude Resources. The Saskatoon-based gold miner had increased its year-to-date gold production by 63 per cent over 2013, thanks in part to a successful implementation of the Alimak mining method at its Seabee gold mine in Saskatchewan.

“It’s one of the drivers for our turnaround,” says Brian Skanderbeg, senior vice-president and chief operating officer at Claude Resources. “It’s not the only one, but it’s been one of the key ones.”

Raise climbing, widely known as the Alimak mining method after the company that introduced it, is a variation on longhole stoping developed for narrow-veined, tabular ore bodies. Successful users of the technique have found that it accelerates their path to production by centring development work within the ore body.

In regular open stoping, overcuts and undercuts provide access to the ore along strike. Since drills can only reach so far, the traditional approach demands sublevels about every 25 metres. Alimak mining uses a specialized piece of equipment called a raise climber (or, casually, an “Alimak”) to drive a raise upwards from the bottom level of the stope to the top level, following the dip of the ore body. Eliminating the intervening levels cuts out a good chunk of lateral development time and spending.

That was the main attraction for Claude Resources, which introduced the Alimak method in its L62 zone at Seabee in late-2013. The lens of interest stood 200 metres away from historical infrastructure; with lateral development included, a 100-metre-high stope at Seabee would have taken 16 to 18 months to mine out using longhole stoping. With Alimak mining, it took nine months.

After an external consultant suggested cost-cutting via Alimak, Claude Resources looked to Barrick Gold’s Williams mine in Ontario as an example. Williams had expanded its Alimak production several years earlier with the help of narrow vein specialists Manroc Developments Inc.

Manroc contractors at Williams build a “climber nest” into the hangingwall just outside the bottom of each stope. They blast the first few metres of the raise and then install a climber running on a curved rail from the nest into the raise. The climber holds two to three people and the drilling and blasting equipment they need. Once the top of the stope has been reached, the miners descend again, screening the raise walls as they go. Switching to a new drill, they drive cable bolts up the centre of the raise, grout them in place and drill production holes. After each round of blasting, the broken ore falls down the raise and is collected by a scooptram.

Ken McKirdy, chief engineer at Manroc, says the Alimak method provides benefits beyond ore access. One is stability: Cable bolting provides better ground support from its position in the central hangingwall of the stope, and the broken ore adds support by putting outward pressure on raise walls. The set-up also provides ventilation if miners leave open one of the raises after breaking through to the next level. Avoiding repeat levels has slight time-saving effects during operation because it eliminates the further work, like fencing backfill, needed on each level.

Allison Henstridge, engineering superintendent at the Williams mine, says the Alimak stopes produce higher tonnages: “Once you’ve done all the work to get it, and you blast it, you have a very good ore source there for a longer period of time. Our longhole stopes are approximately 5,000 to 10,000 tonnes, whereas the Alimak stopes are anywhere from 20,000 to 30,000 tonnes. So you put in a lot of work, but you get a lot of ore out at the end.”

The Seabee mine had to adapt to this new cycle. “You’ll end up being very high productivity and then very low productivity,” comments Skanderbeg. “So your backfill cycles are longer and your mucking cycles are longer. You end up creating stockpiles and drawing off your stockpiles, so it’s important, in terms of blending your ore and ensuring your mill is fed, that you properly manage your stockpile.”

Since Barrick-Hemlo and Manroc began full-scale Alimak mining in Williams’ C zone ore body in 2004, they have made several improvements to the method. One of the disadvantages to mining long, straight raises is that it becomes difficult to follow high-grade ore. Williams mine initially designed 180-metre raises but learned that was far too high. “Because the Alimak has limitations on how much you can change the dip as you’re driving the raise up the hangingwall, you’re potentially mining out dilution that you wouldn’t take if you were able to mine a longhole stope,” says Henstridge. Now a typical Alimak stope is 80 or 90 metres high and mucked more often – an improvement for grade and scheduling. Strike length was also reduced from 15 to 14 metres after problems with hangingwall caving and dilution.

Other improvements have focused on the climber end. Manroc, Williams and Orica Ltd. worked together to set up a bulk emulsion loader on the climber and to incorporate electronic caps, which allow a stope to be blasted in one shot. Tinkering with the drill rig set-up allowed an entire ring of production holes to be drilled without repositioning the drill more than once. A new canopy design has provided more room on the climber platform. “Our miners now tend to view it as a safety device instead of an irritant,” remarks McKirdy.

Though Manroc alone has collected a double handful of Alimak success stories, uptake of the technique has been limited since it was popularized in the 1990s. Asked why, McKirdy says, “It’s a relatively new mining method, and we’ve been more or less refining it ever since. Other people have tried it and haven’t had the same success as us.” He thinks unsuccessful adopters probably made one of two basic mistakes: either they skimped on the number of cable bolts or they oversized the stope.

Overall costs are lower, but the method also costs more to run, which could deter some but does not faze its proponents. “It’s marginally higher in terms of cost per tonne, but the difference we’ve seen in terms of productivity per man-hour and development costs per tonne has been significant,” says Skanderbeg. “We have seen significant reductions in all-in sustaining costs.”

Henstridge attributes the higher cost of Alimak mining to reliance on contractors; at Williams mine, that makes it 10 per cent more expensive than longhole stoping. Claude Resources used Dumas Ltd. to smooth its transition to Alimak mining but will go completely in-house as it moves forward. The company has committed to expanding the method beyond its current, relatively small lens.

“It’s been a good process for us,” says Skanderbeg, “and we’ll keep at it and keep using it where it’s applicable.”