The fight to sink the deepest single lift shaft in the United States
By Michael Yang
October 01, 2015 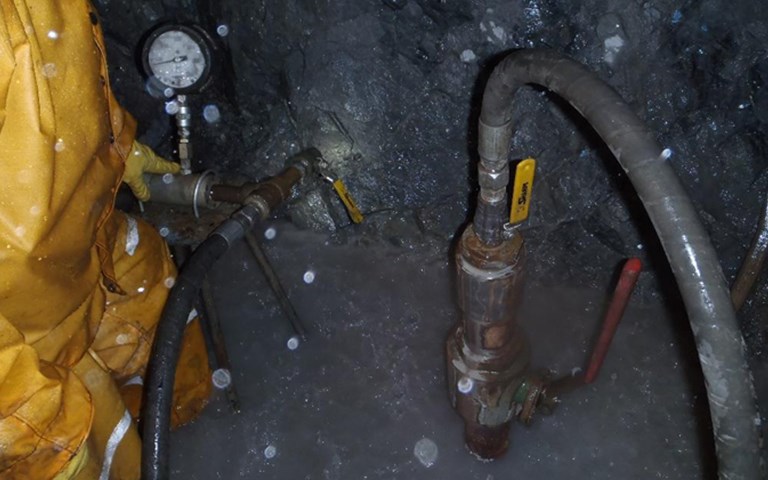 Pockets of water inflows were encountered between 1,770 metres and 1,969 metres below surface, but cumulative flows never exceeded 250 litres per minute until the shaft was sunk deeper. Courtesy of Cementation

A tough group of miners finally reached the planned bottom of Resolution Copper’s no. 10 exploration shaft in Arizona’s Copper Triangle – 2,116 metres below the surface – in mid-November last year. It had taken over five years of hard work and creative engineering in very hot, wet conditions to sink America’s deepest single lift shaft. The record-breaking shaft is the first of six deep shafts that are required in order for Resolution Copper to access one of the largest undeveloped copper deposits in the world. The ore body, seated over two kilometres underground, below the historic Magma mine near Superior, has an Inferred Resource of 1.7 billion tonnes with a 1.52 per cent copper grade. Resolution Copper, a subsidiary of Rio Tinto, plans on mining the porphyry deposit using an enormous panel block caving operation that will produce up to 120,000 tonnes per day of ore during full production.

Shaft sinking officially started in January 2009 with Cementation USA as the contractor. The production cycle called for three-metre rounds and six-metre liner sets, and involved drilling concentric holes, loading, blasting, mucking and then installing ground support, concrete lining and utilities. A double-drum hoist and two 14-ton sinking buckets moved all the materials and equipment up and down the shaft, and an innovative personnel bucket was used to move people.

“We had an overall set-up that was designed to accomplish each of these cycles efficiently,” said Tom Goodell, general manager of shaft development for Resolution Copper, in a presentation last year. “The key to it is the Galloway work stage.”

The Galloway is a 160-ton work stage that has virtually every necessary piece of equipment embedded within its five decks: four pneumatically powered jumbo drilling machines, two vertical shaft muckers, concrete forms for the shaft liner and support tools for utilities. Always remaining near the bottom of the shaft, the stage allowed the miners to complete cycles extremely quickly and work with high levels of automation as the drills and muckers could be operated with an onboard control console.

“During our peak times, we were completing a full cycle per day,” recalled Matthew Swanson, Cementation’s lead engineer on the project. “Everything was moving along very well. Then we hit the hot water.”

In the deep end

Initially, the shaft was expected to encounter minimal water inflows throughout its sinking and very little past 1,200 metres deep. This information was based on the limited data from a single core hole, but “it was generally accepted that this was an exploration project: a large diameter shaft to be sunk to depths beyond what had ever been accomplished in the region,” said Swanson. As such, the existing shaft recovery dewatering system was designed to handle up to 750 litres per minute (L/min) of clean water in the event unexpected water was encountered. During sinking, however, dewatering relied entirely on the hoist to bail the water using the sinking buckets. The sinking refrigeration system was sized based on the expected heat load from the rock mass, no significant heat load from water was expected.

So when hot water, at 80 C, began to flow out of probe holes drilled on the 1,969-metre bench at 500 L/min, everyone was alarmed. Within the next 50 metres, the inflows reached 1,700 L/min, regularly flooding the shaft bottom and bringing air temperatures as high as 45 C with 90 per cent to 100 per cent humidity.

“It wasn’t just handling the water that gave us problems,” said Swanson. The heat and humidity had risen to levels deemed potentially hazardous to work in under both Rio Tinto’s and Cementation’s safety standards. “We had to establish cool rooms on the Galloway and in the stations,” he recalled. These rooms, in conjunction with strict work-rest regimes, helped mitigate some of the risk associated with the heat and humidity.

After multiple pressure grouting campaigns did not sufficiently reduce water inflow, adjustments had to be made to continue sinking under the new conditions. A temporary, makeshift shaft-bottom dewatering system was installed using existing infrastructure. The sinking method was modified so that only half a bench was taken per round. This was a large improvement to safety and production, as the lower side could act as a sump for the water while work took place on the dry, higher ground. However, installation of shaft services or the concrete liner required the work stage to be moved away from the shaft bottom, temporarily halting shaft-bottom dewatering. This would result in the bench flooding and require hours of dewatering before sinking activities could resume. High levels of solids in the water were generated by the sinking cycle, and this led to further difficulties with dewatering, negatively affecting pump performance and reliability.

As sinking progressed, it became apparent that additional controls were needed to continue sinking safely and efficiently. Sinking was eventually paused in September 2013 after progress had stalled out to less than half a metre per day. “If you had asked me five years ago if we could sink a shaft with that much water coming into it, I would have said ‘No way,’” said Goodell.

In the months that followed, work moved to focus on the installation of upgraded cooling and dewatering systems to support the completion of the project. An additional pump station was developed at the 1,987-metre level: a three-metre ring station with two positive displacement pumps that could handle up to 1,150 L/min each of dirty water. Submersible pumps fed groundwater up to this station bottom via existing steel pipes embedded in the shaft liner. The water was then moved up to an existing, permanent pump station at the 1,731-metre level used for dewatering of the old Magma Mine workings. “That became the primary dewatering system while the rest of the staged pumping system became our contingency plan,” said Swanson.

To deal with the heat load in the shaft, which had reached 6.61 megawatts and more than doubled the existing cooling capacity, Resolution Copper decided to finish construction and commissioning of a planned, permanent cooling plant on the surface much earlier than anticipated. As part of these upgrades, Cementation retrofitted 610 metres of two-metre-diameter exhaust duct between the shaft bottom and the main 1,396-metre pump level. They also installed six giant 5,900-kg cooling coils and five 186 kW fans.

Another challenge arose just as the shaft resumed sinking in the summer of 2014 with all systems online. “Fog was forming at the shaft bottom where all of the cold air was interfacing with the hot, humid air,” said Swanson. The visibility would be reduced to the point that it forced work stoppages at times.

Controlling the fog involved continuously varying activities to keep it in check, rather than a static solution. “It was really just a big balancing act where we sometimes reduced the cooling, sometimes limited use of the compressed air equipment, and so on to mitigate the formation of the fog,” said Swanson. “But it got us down to the bottom of the shaft.”

Many of the miners, most locally hired and trained, had stuck through the project since it began with collar construction in 2007. For them, completing the gargantuan task is just the first of six steps in building Resolution Copper’s massive underground operation.

“The work that we did didn’t always involve typical, by-the-book solutions,” said Swanson. “That’s why it was coined brute force engineering. It was a fight – sometimes ugly with lots of hard work – but we got it done, and now there is a blueprint for the future.”