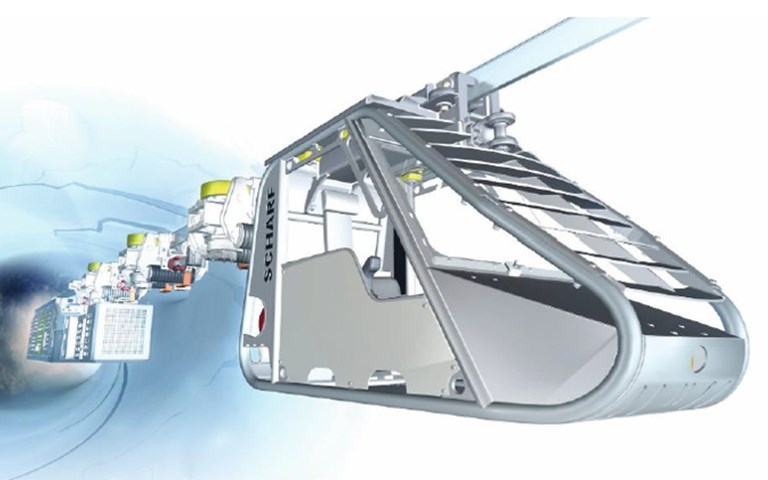 The article was provided by SMT Scharf

It seems mining has reached an inflection point. It has become a unanimous belief among mining companies that they need to become more innovative if they are to survive, succeed and grow. Tony O’Neill, Group Director for Technical & Sustainability at Anglo American, summed it up: “With industry margins being squeezed on all fronts, we have to embrace innovation … mining needs to leap forward 20 years in the next five” (Deloitte 2015).

Innovation, however, does not have to be complicated. In its simplest terms, it means changing the way we do things, either by inventing new technologies or by rethinking processes and systems and applying existing technologies differently. According to Dean Millar, engineering professor at Laurentian University in Sudbury, who developed the concept of the 40 per cent mine – using only 40 per cent of the energy of today’s operation by 2040 – “there are some game changing technologies on the horizon, but…there are plenty of technologies right now, even proven for decades in mines, that we should think about adopting. Not all the technologies apply to every mine, but when we have looked at individual mining operations, we have managed to draw upon the established technologies to reach our 40 per cent target.”

One such technology, which is well established in other parts of the world but underused in North America, is the Electric Monorail Transport System (EMTS). The technology is becoming particularly relevant for the Canadian context considering three main drivers that are changing the mining industry: 1) the need to reduce operating cost and improve productivity, 2) the trend towards mine electrification, to comply with emission reduction targets and carbon tax regimes introduced by the Canadian government on the one hand, and to improve the health and safety of underground workers on the other, and 3) the increasing pressure to rethink the traditional truck and loader material handling systems due to their inherently high operating and maintenance costs, limited efficiency, and health concerns linked to diesel particulate matter (DPM) emitted by the equipment.

Along similar lines, John Bianchini, CEO of Hatch, a leading global mining engineering companies, identified five key areas to help move the mining industry forward towards smarter mining solutions: Technology Road Maps; Electrification; Mine-to-Mill; Mining Automation; and New Mine Financing. As for electrification, he comments that Hatch’s clients are envisioning clean, safe, automated mines operating solely on electricity, at half the energy intensity of today, leading to a healthier, safer work environment and reduced operating costs. The EMTS presents a cost-effective option to achieve the vision of a cleaner and safer mining operation.

In addition, one could argue that the capital-intensive truck and loader material handling systems, which the industry has predominantly employed, have been cost-effective only during times of high profitability for mining operations due to high commodity prices. The extreme pressure mining operations face at present to reduce operating costs provides an opportunity to re-evaluate systems and technologies that may have been taken for granted, and consider going underground differently. The EMTS can present impressive advantages over trucks, especially with respect to decline development and gradient.

It should be mentioned that monorail systems are most economically feasible in narrow veined metalliferous mines with a maximum daily production capacity of not more than 4,000 tonnes. While the technology does not apply to all mines, it can provide significant benefits to those operations that meet the parameters for a monorail system. Furthermore, it can present attractive solutions for satellite deposits and deep underground deposits as part of expansion projects.

For mining operations that meet the parameters to take advantage of monorails, they present an extremely safe and efficient zero emission transport technology due to the electric drive technology that is fed by conductor bars. Monorails allow for flexible transport of bulk material, machinery and equipment, or personnel. Impressively, they can easily negotiate steep and changing gradients, and with speeds of up to 3.5 m/s and the ability to transport loads of up to 30 tonnes per trip, monorails can go down inclines anywhere between 0-24 degrees (35 degrees with a special gear-wheel application) while providing smooth and efficient speed control for safe and comfortable operation. Especially with respect to smaller development and decline size, EMTS offer significant benefits compared to truck based systems: A monorail can operate at a gradient of up to 24 or, respectively, 35 degrees in a 3.5m x 3.5m excavation, allowing steeper and therefore cheaper and faster access to the ore.

Furthermore, the system is designed to negotiate horizontal curves of down to 4.0 m and vertical curves of 10.0 m and is therefore able to negotiate very sharp curves. The integrated load pick-up (hoist) has an integrated overload protection for additional safety.

Derailments are virtually impossible due to their specially designed I-beam rail and sliding is prevented by a highly-efficient active brake system. The dynamic brake system allows the motors to become generators and feed nearly a third of the power required for the monorail back to the electrical system. This also translates into a lower demand for ventilation because the braking energy is not lost as waste heat emissions. In addition, monorails require no special floor preparation and can be easily integrated into already existing systems.

Monorails are especially suited to solving the problems of ultra deep underground mining. In South Africa, the SMT Scharf Group, the leading supplier of rail-bound transport systems, holds the world record for monorail transportation systems at great depths. In the Anglo Gold Ashanti Mponeng Mine the SMT Scharf monorails go as far as 4,100 m below surface – and another even deeper decline is currently being planned.

In another South African platinum mine, SMT Scharf has installed 4 trains in twin incline development at a total length of 2,600 m. Two additional declines on other shafts are currently equipped with monorail systems at the mine. SMT Scharf trains are used all over the world, primarily in hard coal mines, gold mines and in underground mining for platinum, diamonds, copper and nickel predominantly in Russia, China, and South Africa. A Canadian mining company has also deployed a monorail system in their gold mine in Mexico and another Canadian company is currently evaluating the technology for a Canadian project.

Reduction in Waste and Increased NPV – A Case Study

Just how big the economic impact of switching to monorails can be was demonstrated in a simulated case study conducted in the Australian Cardassian Decline at Newmont’s Jundee operation, where a team from the University of Adelaide compared the possible economic benefits of an EMTS handling system compared to a truck and loader system. The result of the case study showed that the redesign of the decline meant an 86.8 per cent reduction in decline development tonnage, saving AU$10 million over the truck system. The mine design with monorail resulted in a 68.7 per cent reduction of waste material moved, or 571,250 tonnes. Small excavations also require less ground support, which represents a significant cost reduction. In the Jundee Operation model, AU$184.56 of savings per meter of ground support could be achieved along with ventilation savings of AU$832,400 per year compared on the basis of one truck vs. monorail. Consequently, the Net Present Value (NPV) of the deposit was found to be AU$38.3 million higher using the monorail system than the truck system, with the mine life shortened by 1.66 years. These numbers, of course, are only guidelines and may vary based on the number of trucks utilized and the size of the operation.

However, a smaller excavation (3.5m x 3.5m diameter) in combination with a steeper incline and a resulting faster access to the ore bears significant savings potential and can positively impact the NPV of a smaller to medium scale mining project.

The potential impact on a project’s NPV together with the environmental and safety benefits of monorails means Canadian miners would do well to consider taking a fresh look at a technology that has been utilized in various parts of the world for decades. This is especially the case for smaller mining operations as well as the developers of deposits that either extend into great depths or expansion projects. Considering the recent acquisition of RDH Mining, SMT Scharf is becoming a systems solution provider for battery-electric underground transportation.

This article was written by Aarti Mona Soerensen, who heads the Competence Centre for Mining and Mineral Resources at the Canadian German Chamber of Industry and Commerce Inc. in Toronto. In her capacity she provides market entry support and customized consulting services for German companies in Canada and supports the development of strategic business partnerships between Canada and Germany in the mining sector.