The retrofit at Rio Tinto's Kitimat operation has the smelter producing more without an increased footprint
By Kylie Williams
July 06, 2017 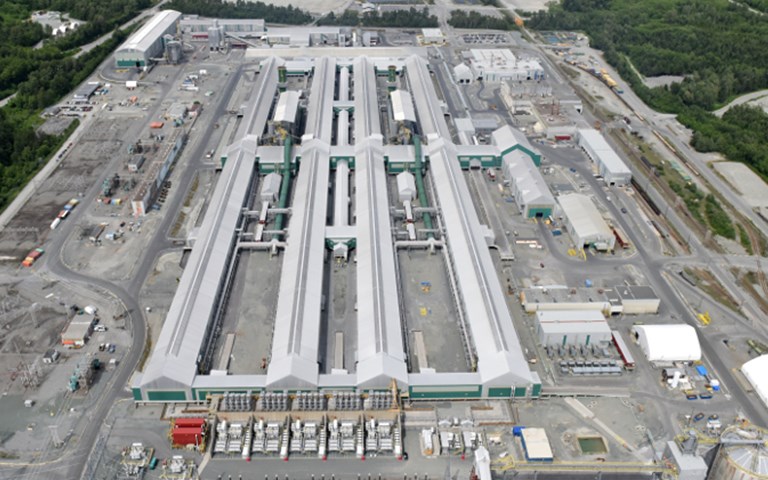 In 2011, Rio Tinto announced plans to modernize the 60-year-old Kitimat Aluminum Smelter in north-central British Columbia. Four years and $ 6 billion later, construction of the new smelter was complete. The plant has been operating at full capacity since late 2016, producing some of the lowest-carbon footprint, highest-purity aluminum in the world.

Aluminum smelting is an energy-intensive process requiring enormous amounts of reliable and inexpensive electricity, usually generated by hydro- or coal-fired power plants. Despite the energy required to produce it, aluminum is ubiquitous in modern life. The lightweight, corrosion-resistant metal is used for everything from building materials to drink packaging, household utensils to electronics. Its main use is in transportation, as a lightweight material for aerospace and automotive panels, increasingly replacing heavier steel components to lower fuel consumption and greenhouse gas (GHG) emissions over the life of a vehicle.

Rio Tinto dramatically cut emissions and increased annual production by almost 50 per cent at the Kitimat smelter by replacing old technology with new, while continuing to rely on the reliable hydroelectricity available in the region and the skilled workforce already in place.

The smelter and nearby town of Kitimat were carved out of the rugged B.C. wilderness in the early 1950s by what was, at the time, the largest private sector construction project ever undertaken in Canada. The Kitimat-Kemano project created the Nechako reservoir, excavated a 16-km tunnel through the Coast mountain range and built a hydroelectric power station at Kemano. An 80-km transmission line was also constructed to deliver 1,000 megawatt (MW) capacity to the newly constructed smelter at Kitimat. 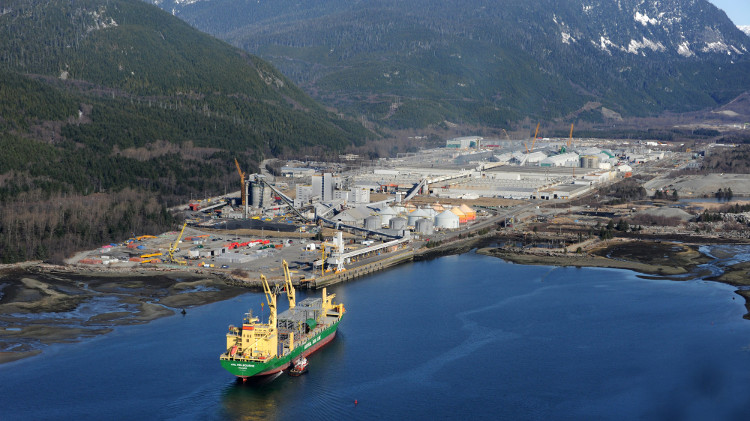 Since then the fundamental process of producing aluminum has changed very little. First, bauxite ore mined from the equatorial regions of Australia, China, Brazil, and Guinea is refined to alumina powder (Al2O3). Alumina, once delivered to a smelter, is then dissolved in a molten fluoride-containing electrolyte at about 960 C and reduced to aluminum metal by electrolysis. This electrolytic reaction takes place in a series of connected reduction cells, also known as “pots,” containing carbon anodes and cathodes.

Rio Tinto purchased the Kitimat smelter, together with the complex reservoir system and powerhouse at Kemano, from Alcan in 2007 and completed the modernization project by early 2016, despite challenging commodity market conditions in the years between. Now at full capacity, the smelter’s 384 pots produce three tonnes of aluminum each per day, or about 420,000 tonnes in total per year. But why modernize a 60-year-old plant in a remote location rather than starting fresh somewhere else?

“A primary, competitive advantage for the business is our self-generated power originating from the Nechako Reservoir,” explained Gareth Manderson, BC Works general manager at Rio Tinto. “We’re able to produce hydropower with zero CO2 emissions, and, coupled with the advances in smelting technology through Rio Tinto’s research and development here in Canada, we can produce one of the lowest greenhouse gas signature aluminums in the world.”

Manderson added several other reasons Rio Tinto had chosen to modernize the Kitimat smelter, rather than relocate. “We’ve been here for 60 years and we’ve got a great group of people who know how to make aluminum,” said Manderson. In addition, the smelter is on the Douglas Channel, a deep, year-round ice-free port with easy access to southeast Asian and United States markets as well as for deliveries of alumina from Rio Tinto’s operations in Australia.

But building a new smelter alongside a still-operating smelter, which was handled by Bechtel Canada, required intense coordination. Aside from managing production, safety and the extra workers onsite, the new smelter is nestled between two salmon-bearing streams requiring protection and bordered on the remaining sides by marshlands, mountains and the ocean.

“We shut part of the smelter down, and then put the new smelter on the existing land that included the old production area,” said Manderson, “Now we’re going through and dismantling the old smelter.”

What's new under the hood

The Kitimat smelter now employs AP40 smelter technology. AP40 is named for Aluminium Pechiney, the proprietary French research company now owned by Rio Tinto that first developed the technology, and the 40 means that over 400,000 amps are flowing through the pots.

“The process of making molten metal is very similar in the new plant as in the old plant,” explained Laure Kline (Massardier), business improvement blackbelt with Rio Tinto at BC Works. “We still need carbon, electricity, alumina and an electrolytic bath. All this happens in pots.” 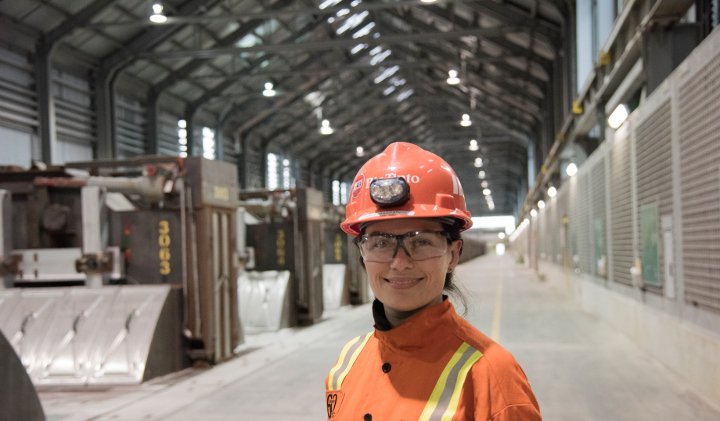 Laure Kline began working on Potlines 1 and 2, the oldest on site at 64 years, as the first female superintendent in the Reduction plant. Rio Tinto/Dwight Magee

Kline is a chemical engineer by training and witnessed the modernization from start to finish during her five years working at the Kitimat smelter. Shortly before the old pots were shut down, Kline became one of the first to transition to the new technology as part of the reduction reaction pilot team.

“The main difference with the new technology is that we now prebake the carbon before it goes in the pot,” said Kline. With the old Soderberg technology, the carbon sources were baked above the pots and manually added. As the carbon was burning to make the aluminum, it was necessary to keep refilling from the top.

“Now, every pot is covered,” said Kline, “The anodes are baked in a furnace equipped with a fume treatment centre.” The giant carbon anode blocks weigh over a tonne each and are lowered into the hooded pots to set the reduction reaction in progress. Fluoride emissions from the pots are captured with ‘fresh’ alumina and reused in the pots. The used anodes are also fully recycled on site.

“In terms of health and environment, it’s like night and day,” said Kline of the new Reduction area. “The work environment is much cleaner in terms of gas and dust emissions.”

Energy efficiency has skyrocketed with the new system, too. The old pots used 18.5 to 20 kilowatt hours of energy to make one tonne of aluminum (kWh/t), and the AP40 pots use around 13 kWh/t for the same amount. “These are some of the best numbers in the business,” said Kline, explaining that the team is trying to “squeeze the pots” to become the most productive smelter in the world.

Better for the environment

“From a GHG perspective, we’ve reduced CO2 emissions by 36 per cent,” said Manderson. “Our process is about 30 per cent more efficient on energy than the previous one. We emit less CO2 to manufacture the same tonne of aluminum.” 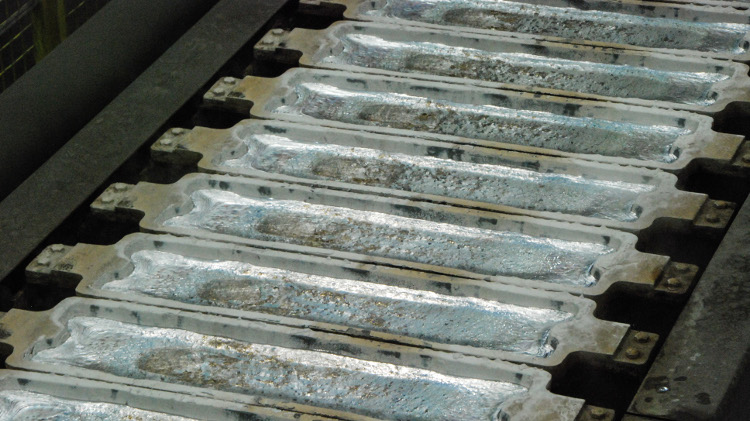 In addition to the CO2 reductions, the plant has reduced particulate emissions by 80 per cent and significantly reduced fluoride emissions through more efficient capture and recycling. By pre-baking the anodes and capturing and treating those fumes, there has been a 98 per cent reduction in the release of polycyclic aromatic hydrocarbons that come from the carbon source.

While the 50 per cent overall reduction in the smelter’s environmental footprint has been welcomed by Kitimat residents, the sulphur dioxide (SO2) emissions have caused some residents to raise concerns with the media over the impact on people with asthma.

“Sulphur comes from the raw materials in our process, so when we increase production by 50 per cent, we potentially impact SO2 emissions,” said Kline. Knowing that increased SO2 emissions were a possibility, Rio Tinto brought in expert consultants on SO2 effects to model the SO2 emissions and evaluate the potential impact to the environment.

In response, the company built its gas and fume treatment centres as tall stacks to disperse the heated and diluted SO2 gas high into the atmosphere. A comprehensive environmental program sampling air, water, vegetation and soil at sites across the Kitimat Valley is monitoring dispersion around the plant today. Air quality data for monitoring sites around Kitimat is presented on the BC Air Quality website.

The number of workers on site, which swelled to over 4,000 at the height of construction in 2014, has leveled out at around 1,000 operations personnel. Manderson said the next step is to optimize operations and productivity and is canvassing employees for innovative ideas.

“We’re streamlining processes through discussions with employees,” said Manderson. “If you think about having 1,000 people chipping away at doing something just a little bit better each week, or month, or each shift, that’s a lot of improvement over time.”

The decision to breathe new life into an old smelter paid off. The next challenge is to stabilize the process and still be the best in ten or fifteen years. “Having state of the art technology doesn’t automatically make you the best,” said Kline. “It sets you up for success, but what makes it work is the people and how they operate it.”