Kirkland Lake stays on top of seismic events at its Macassa mine
By Eavan Moore
July 22, 2016 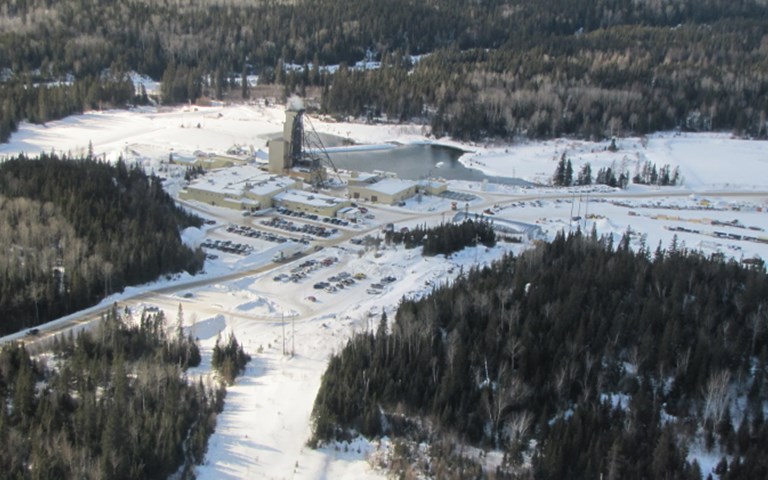 To keep its Macassa mine running safely, Kirkland Lake has installed an ever-expanding network of sensors to detect near-daily seismic activity. Courtesy of Kirkland Lake Gold

By the time Kirkland Lake Gold took ownership of the Macassa Mine Complex in 2002, daily seismic activity at the deep Ontario hard rock mine presented well-established planning challenges. In 1993, a rockburst resulted in a double fatality. In 1997, routine longhole activity triggered a series of rockbursts that rendered the main shaft unusable below 5,800 feet.

To keep Macassa running safely, Kirkland Lake relies on a recently upgraded microseismic monitoring system for real-time warnings and historical information that helps guide short- and long-term decision making. “With a seismically active mine, we need that information to keep mining,” said Chris Chartrand, senior mine planner at Macassa.

Senior ground control technologist Richard Hong was at the start of his career when he installed the first seismic monitoring system at Macassa in the mid-1980s. Since his return to the mine eight years ago, he has overseen the latest mine-wide upgrade to the Paladin system sold by Kingston, Ontario-based ESG Solutions, one of only two companies in the world that provide microseismic monitoring systems for underground mines.

The sensor array at Macassa has been expanding as the mine grows, and is now one of the larger arrays in Ontario. It covers the original Main Zone orebody and the newer South Mine Complex. Throughout the mine, coverage consists of 9 triaxial geophones and 90 uniaxial accelerometers, with the array optimized to provide for the most accurate source location.  These sensors are responsive to higher frequency, lower magnitude events.

The underground system is supplemented by the SGM Paladin (Strong Ground Motion) system on surface which uses triaxial geophones that are designed for lower frequency, higher magnitude events. This enables the ground control team to calculate a magnitude value for the larger events that would otherwise overwhelm the sensors underground.

While the sensor technology itself has not changed much since the 1980s, the hardware and software that receives and interprets sensor signals is far more sophisticated. Each sensor transmits via copper cable to a Paladin digital recorder placed nearby in the mine workings. The Paladin records these signals with exact times and transmits this information by fibre optic cable to an acquisition computer in the ground control office on surface. In the current version of the system, the only limit to the number of possible channels is determined by the capacity of the processing hardware, an important factor for the expanding mine in deciding to upgrade.

From surface, Hong and a three-person ground control team provide 24/7 monitoring using ESG’s proprietary software suite on a Windows computer. The WaveVis module identifies each wave’s arrival time and calculates the event source location against a geophysical model. SeisVis visualizes the seismicity within a 3D model of the mine site and allows the operators to perform advanced analytics with the data. It can display information in real time or as an animated historical playback.

Every 12 hours, ground control reviews the data and publishes reports that are communicated to all production crews in their pre-shift safety huddles. Other interested personnel, like Chartrand, can check the 3D model themselves.

“This seismic program shows me exactly where every seismic event has been in the last 24 hours, and the magnitude,” said Chartrand. “I can rotate the whole mine in 3D to pinpoint exactly where these things occur. It picks up all our blasts as well, in real time, so we can tell if it happened with the blast or between blasts.”

Hong’s office uses additional tools for post analysis of the seismic data. One such program is mXrap, a platform developed at the Australian Centre for Geomechanics with funding from a consortium that includes Kirkland Lake.

“We routinely use mXrap to look at seismically active headings for post-blast activity, for determining re-entry times, and for larger production blasts,” said Hong. “In addition, we conduct a mine-wide post analysis every two weeks and concentrate on the most active headings during that time period to try to identify the mechanism for the seismicity – whether it is related to geometry, a reducing pillar dimension, or mine sequencing.”

Safety and mine planning

Strong microseismic events – defined at Kirkland Lake Gold as having a local magnitude of -1 or higher – happen almost every day, but they only affect working crews a few times a month. Usually the events occur with a blast when underground crews are not present.

If unusual seismic activity is occurring, ground control and senior production mangers can take immediate action. “If, during a shift, we see an escalation of events in a particular heading, we can pull the crew out of a heading for the remainder of the shift,” said Hong.  The crew members themselves, if they hear a suspicious noise, can call up to ground control and find out whether they need to move to a different area. It may take ten minutes to half an hour to move a crew out.

In the longer term, ground control helps avoid unexpected disruptions to the schedule by assisting with mine planning.  The ground control team reviews design options and makes recommendations about the best scenario to deal with the known seismicity in certain areas. Typically, input from the ground control team can influence the selection of the mining method, its mining sequence or the minimum re-entry time into the area after a blast.

Normally, if a blast was conducted at the end of the first shift, the second shift would be able to enter and muck out the stope. When an area is known to be very seismically active, ground control recommends that nobody enter it until a minimum of 12 hours have passed. “Usually we know that coming in with the three-month plan, and we’ll account for that,” said Chartrand. “It’s usually in a longhole area, that twelve-hour re-entry.”

The fact that this is a common and foreseeable problem means the production schedule includes room for occasional slowdowns. “We don’t necessarily schedule a blast every shift,” said Dave Willoughby, chief engineer. “We reduce that number to so many blasts in a week, knowing there could be many things that cause a crew to miss a blast – ground conditions being one.”

A given area’s production rate is also affected by the nature of the ground support installed; more seismically active areas require dynamic support, such as cone bolts, that take additional time to install.

Seismic information helps the mine planning team sequence activities around long-term pillars that are as stable as possible. The proportionally smaller pillars used in many other mines are too risky for Macassa. “We have to watch the size of pillars that we leave between stopes or in stopes themselves,” said Chartrand. “We can’t mine a panel stope leaving little rib pillars and whatnot; those have to be taken out. So we have to mine the whole lot from one end to another, without leaving any low-grade areas out.”

Despite frequent seismicity, Chartrand said that damaging events are quite rare. On June 4, 2016, a seismic event heaved up the floor on the 5,300 level and toppled a battery locomotive. It was the first event of that magnitude he had witnessed in at least two years. The mine was prepared for it. Following a rockburst in October 2015, a post analysis of the event was conducted and ground control was able to identify the triggering mechanism and anticipated an increase in seismic activity. The decision was made to increase the level of ground support. “Because we knew this area was active, we put in a dynamic support, which is designed to handle this amount of energy,” he said, “and it did its job. [The seismic event] just heaved the floor because there’s no support there at the bottom three feet.”

The Macassa mine was one of the earliest customers for ESG’s products back in the 1990s according to Alexander Mataseje, technical sales specialist of mining and geotechnical services at ESG Solutions. “Companies like Kirkland Lake have always been very proactive and on the cutting edge for their mining methods and operational procedures,” he said.

The necessity that bred early invention is spreading to more mines over time. “We are seeing a lot of newer operations come up, and as they’re approaching 800 metres in depth – because we’re mining in the Canadian Shield, very hard rock – they’re starting to approach a realm where seismicity becomes a problem,” said Mataseje. “So we do see a lot of mines looking into putting in some kind of preliminary system and growing it with their operation so that they’re protected and covered.”