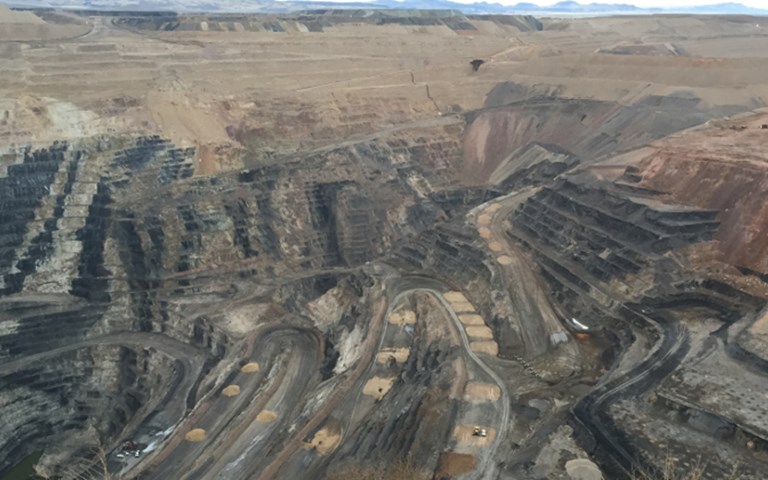 “I think it’s the vision for the future. And I think we’re almost there,” said Larry Allen, Newmont Mining’s senior director of resource estimation. “Within the next three to five years, that’s going to become the way we do business.”

Allen was explaining stochastic mine planning from his office in Denver, Colorado. One of a handful of companies driving research in stochastic planning, Newmont recently tested the state-of-the-art scheduling method at its Twin Creeks gold mining complex in Nevada. The payoff for a stochastically optimized mine plan – that is, one which uses the full set of simulated orebody data generated at a given project for optimization and scheduling, rather than just the average values – could be enormous. Researchers at McGill University estimated the potential for a four to nine per cent increase in the net present value of the Twin Creeks mining complex by using a stochastic optimization process that integrates the mine to product value chain, rather than a conventional deterministic one.

Newmont is part of an industry consortium (which also includes Barrick, BHP Billiton, Vale, AngloGold Ashanti, De Beers and Kinross) supporting the COSMO Stochastic Mine Planning Laboratory at McGill University since its inception in 2006. The COSMO lab, headed by professor Roussos Dimitrakopoulos, is at the forefront of efforts to develop and implement stochastic mine planning processes at different mines around the globe.

“The optimizers we have now use mining blocks with a single value,” explained Dimitrakopoulos. “They cannot use more values, they cannot use [all] the information that is generated when you simulate from grades and material types to geometallurgical properties. If you want to progress things, you have to figure out how to rewrite the existing optimizers to be able to capitalize on multiple inputs quantifying risk, as well as implement the simultaneous optimization of all components of mining complexes from mines to products.”

By looking at all of the possible orebodies produced during the simulation phase holistically, stochastic optimization examines all the different scenarios and finds a mine plan that will be successful no matter which single orebody simulation ends up being closest to reality. Accounting for the uncertainty in each mining block, Dimitrakopoulos said, allows stochastic schedulers to much more closely meet expected production targets, minimize project risk and increase economic value through better sequencing.

As with deterministic methods, stochastic optimization is done in two steps. First the orebody must be modelled. Data from core samples (taken perhaps every 30 metres) is fed into stochastic orebody modelling software, which interpolates between the drill holes to produce individual grade histograms (distributions of possible ore grade values) for each mining block of perhaps 10 metres cubed representing the orebody. Good models will make spatial and structural connections between mining blocks, creating conditional grade distributions – the grades that are found in one block are conditional on the grades found in the block next to it. The grade histogram of each mining block is then sampled once randomly and the collection of the samplings from all mining blocks in the deposit generates one simulated scenario. Different scenarios are generated by repeating this process. Generating 15 or 20 simulations creates a wide range of possible orebody scenarios that quantify the uncertainty in all attributes of interest of a deposit (grades, material types, geo-metallurgical attributes, other).

Despite simulating those 15 to 20 possible geological scenarios, miners – including Newmont, until now – have then had to choose a single “average-type” (or estimated) scenario on which to base their mine planning and production forecasting. This is the model of the mineral deposit, the core input to the conventional or deterministic mine planning optimization process. Miners can use the range of scenarios to place bounds and confidence levels on the production forecasts of any mine plan and life-of-mine production schedule. Integrating the full set of simulated scenarios to the optimization and scheduling stage has not been possible until recently.

Using all the grade values from all the simulations, Dimitrakopoulos explained, “allows us, with the new formulations that we have developed, to figure out how to combine mining blocks together so that production targets are met with the highest chances of materializing.” The stochastic optimizer generates schedules that manage uncertainty by “blending” the economic values of each block with the probability that those values will materialize. To simplify, blocks with higher certainty are mined during the same time period as blocks with lower certainty, so that the average grade being mined and processed during each period remains close to targets.

If it works here…

The Twin Creeks test case aimed to prove the value and feasibility of this method in a challenging real-world scenario. The mining complex comprises two deposits with different geologies (sulphide ore and oxide ore), stockpiles with 22 different sulphide blends, and input to the plant from three other external sources. Sulphide ore is processed in an autoclave with strict blending requirements for three compounds found in the ore (sulphide sulphur, carbonate and organic carbon), while the oxide ore is stockpiled or sent to either a mill or an oxide leach. The company can also add reagents to help meet blending requirements in the autoclave, but has legally imposed operational limitations as to how much acid can be used. And both pits share the same equipment, so every block mined in one pit comes at the expense of a block in the other. With this level of complexity, small differences in the actual inputs to the process can have a considerable impact on the output.

“The way we have done things over the years has become more and more complicated because of the required blending of different geochemistries,” said Allen. “Looking for ways to optimize becomes more and more important.”

Supported by a $2.5-million grant from the Natural Sciences and Engineering Research Council of Canada (NSERC) and funding from the seven industry partners, Dimitrakopoulos and his team of graduate students and researchers at McGill’s COSMO Lab took 2013 drill hole data along with simulated ore body models of Twin Creeks from Newmont. Over one million mining blocks in the models represented 200 million cubic yards of material in the mineralized domains of the two pits. “Newmont simulated all four of the elements of interest [the three compounds relevant to the autoclave, and gold], and these 20 simulations” – totalling over a gigabyte of orebody data – “are what we used as input to the optimization of the mining complex,” said Dimitrakopoulos. “Given the differences in the heterogeneity of the materials that flow through the mining sequence in the complex, we were able to optimize the blend and destinations so that what is sent to the autoclave has the right proportion of each compound, maximizing the gold production.”

…it can work anywhere

Twin Creeks has been in operation since the 1980s, so it is constrained by the existing shape of its pits and the materials currently stockpiled. New mines would see even greater benefits from stochastic optimization. But this test case proves there are still opportunities for Twin Creeks. “We certainly expect to make use of the research outputs,” said Allen. “The results of the test case would indicate the potential to generate additional value from the deposit, so that’s certainly a possibility worth pursuing. It also identified opportunities in stockpiling that might provide us with a better blend.”

The next step, he added, is to bring the approach in-house to begin developing and using for Newmont’s internal purposes. “It’s really just getting the tools,” Allen said, noting that this is easier said than done. “The stochastic optimizer is the very hard part to develop,” he explained, “from conception and derivation of the math and methods, to the solution algorithms and the computing methods and digitization.” Ultimately, the goal is to get this capability into the hands of current mine planners, so the people already doing the mine plans would just use a different methodology.

“I think stochastic modelling and planning has [already] been shown to always provide better benefits and to provide better and more information,” said Allen. “Now it’s up to us to do our detailed analysis of these results versus the way we used to do them, and to make the case for it. I think these results will demonstrate that there is a definite economic benefit to going to stochastic mine planning.”